Restringing a nylon strung guitar is a little fiddlier than a steel strung acoustic but it's still an easy skill to learn. In this blog we'll cover how to approach changing the strings on a traditional classical guitar.

1. Firstly, we need to get the old strings off. Depending on how they were put on previously this can take a few minutes! 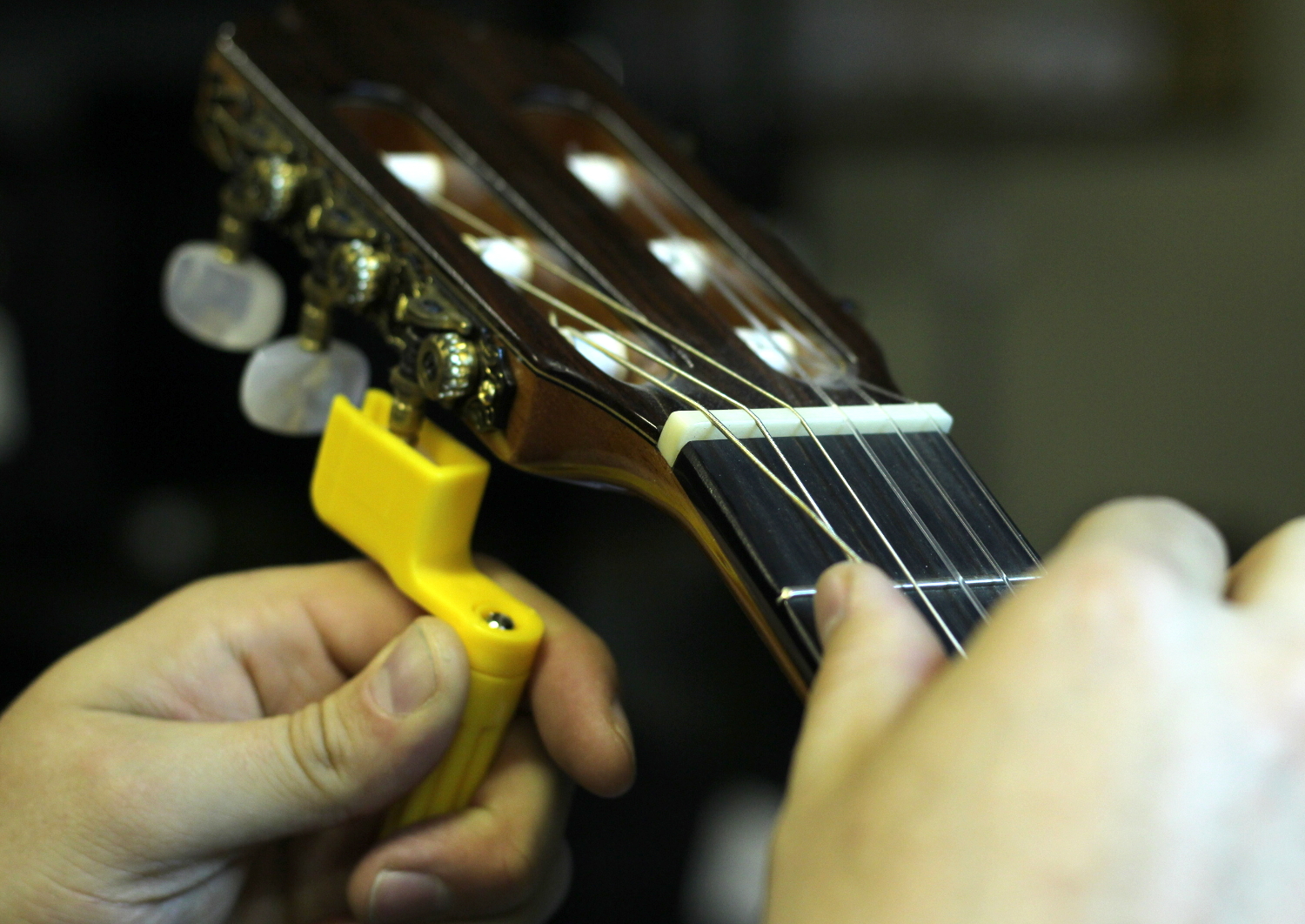 2. It's a lot easier at this end: they should be easy to pull loose once the tension is taken off: 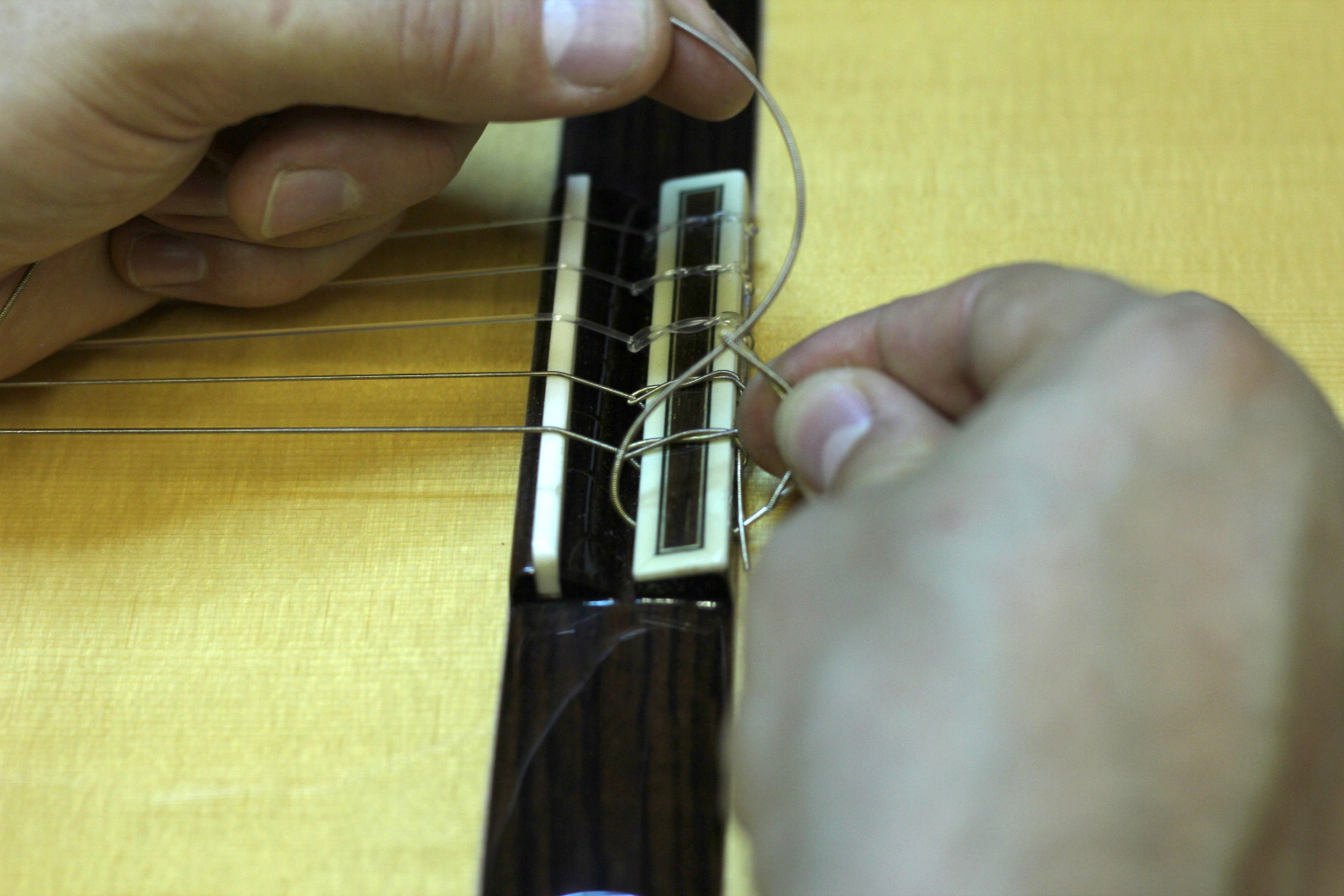 3. Ok, time to tie some knots! First pass the end of the high E string through the hole in the bridge heading away from the neck so that the string end pokes out of the back of the bridge. The length of string behind my thumb and forefinger is the long part that we're going to tie on at the other end: 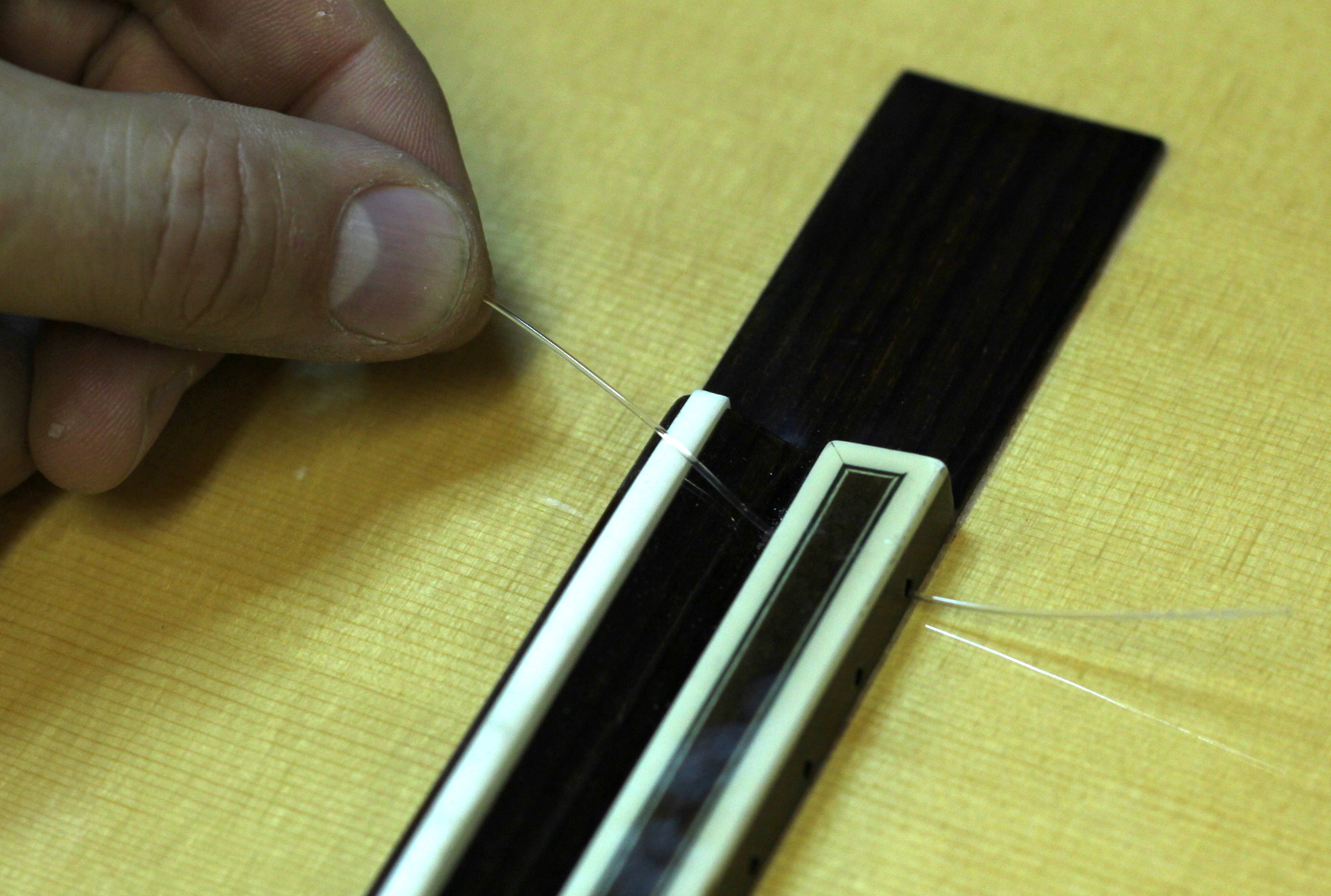 4. Now we're going to bring theend of the string back on itself. Notice that the end of the string goes to the treble side of the long length of string (or behind the long string if you're looking at the guitar as in the photos: 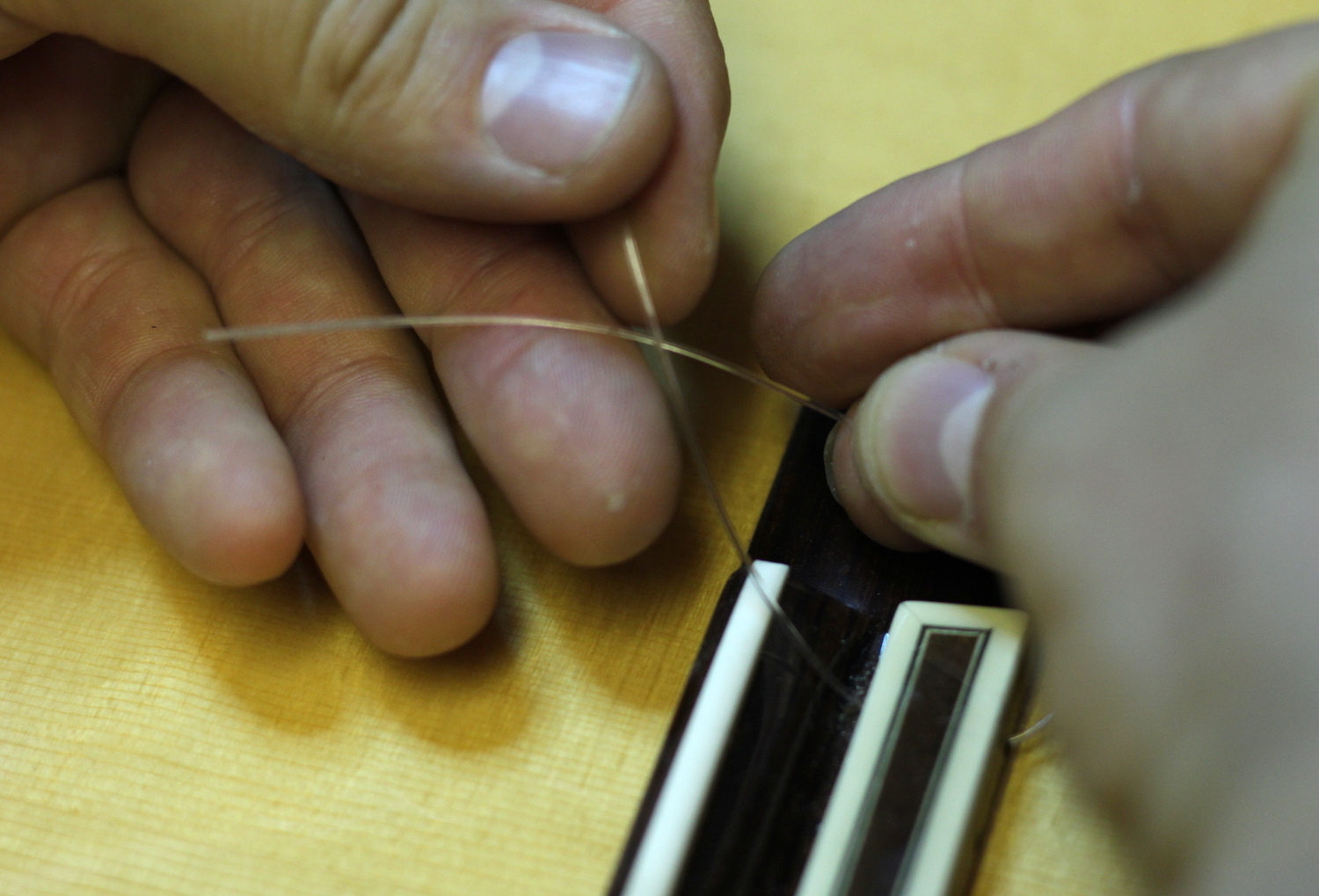 5. And round it goes to make a loop passing around the long length of the string: 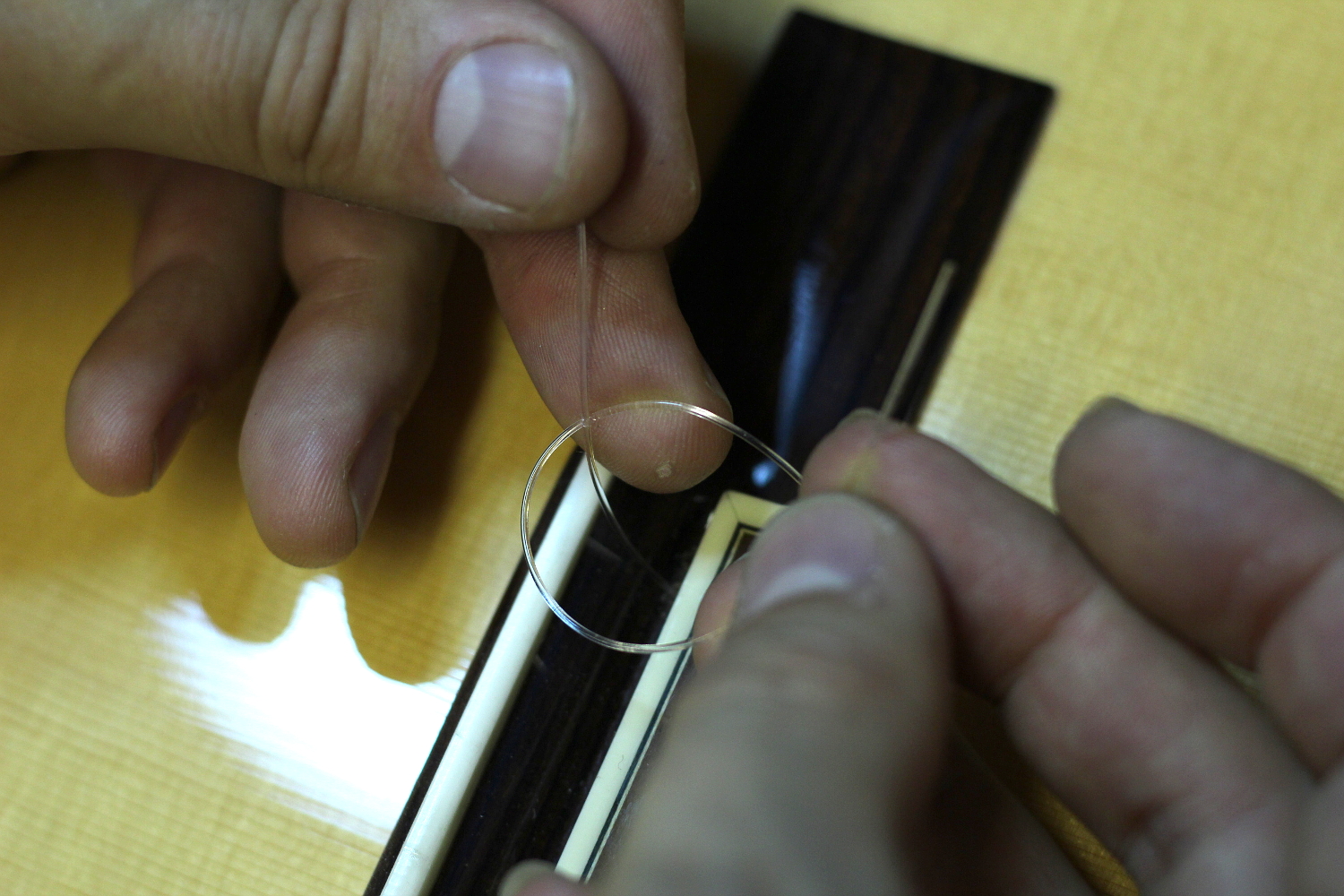 6. Now we're going to wrap a couple of turns of the end of the string around on itself. Over the top and underneath: 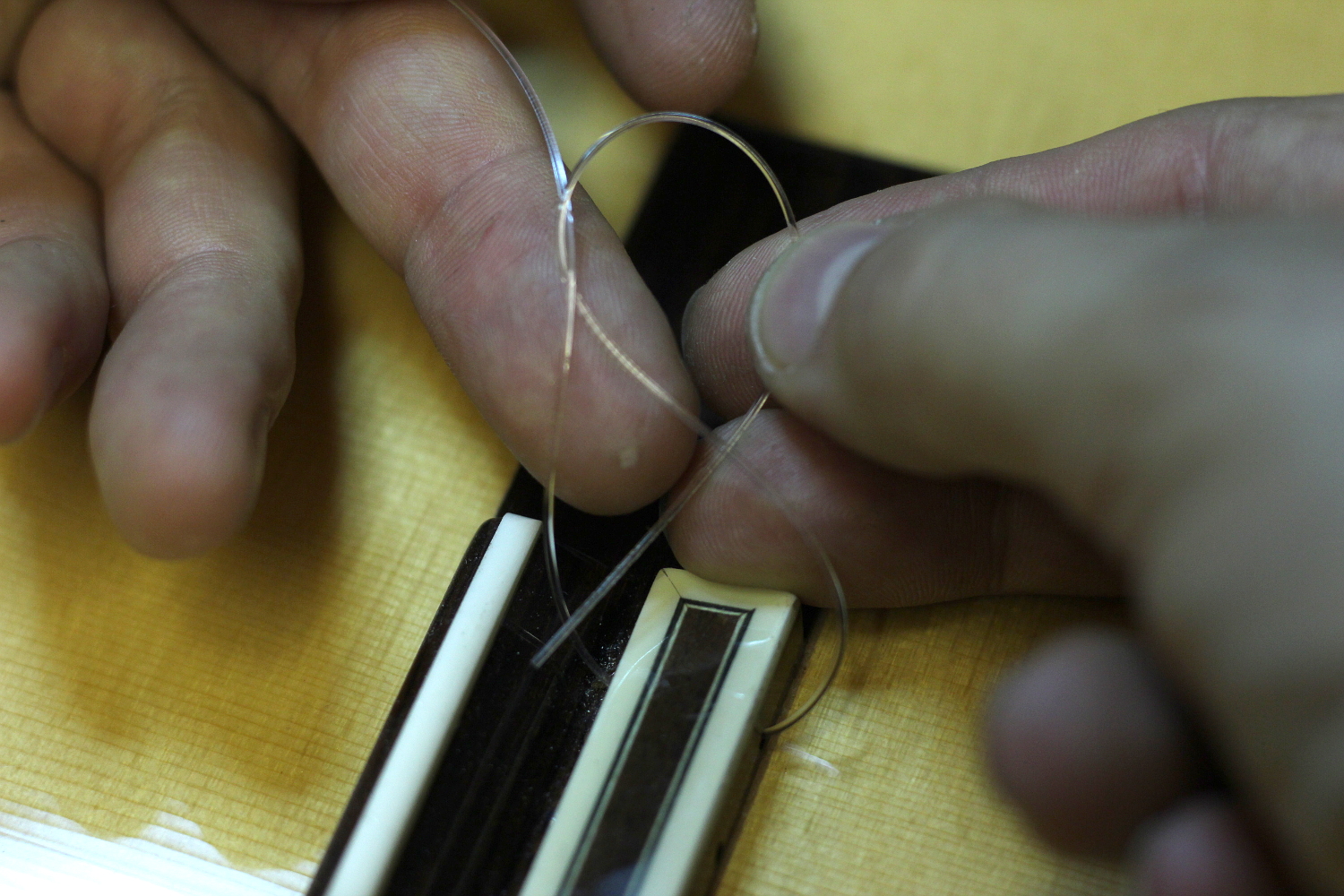 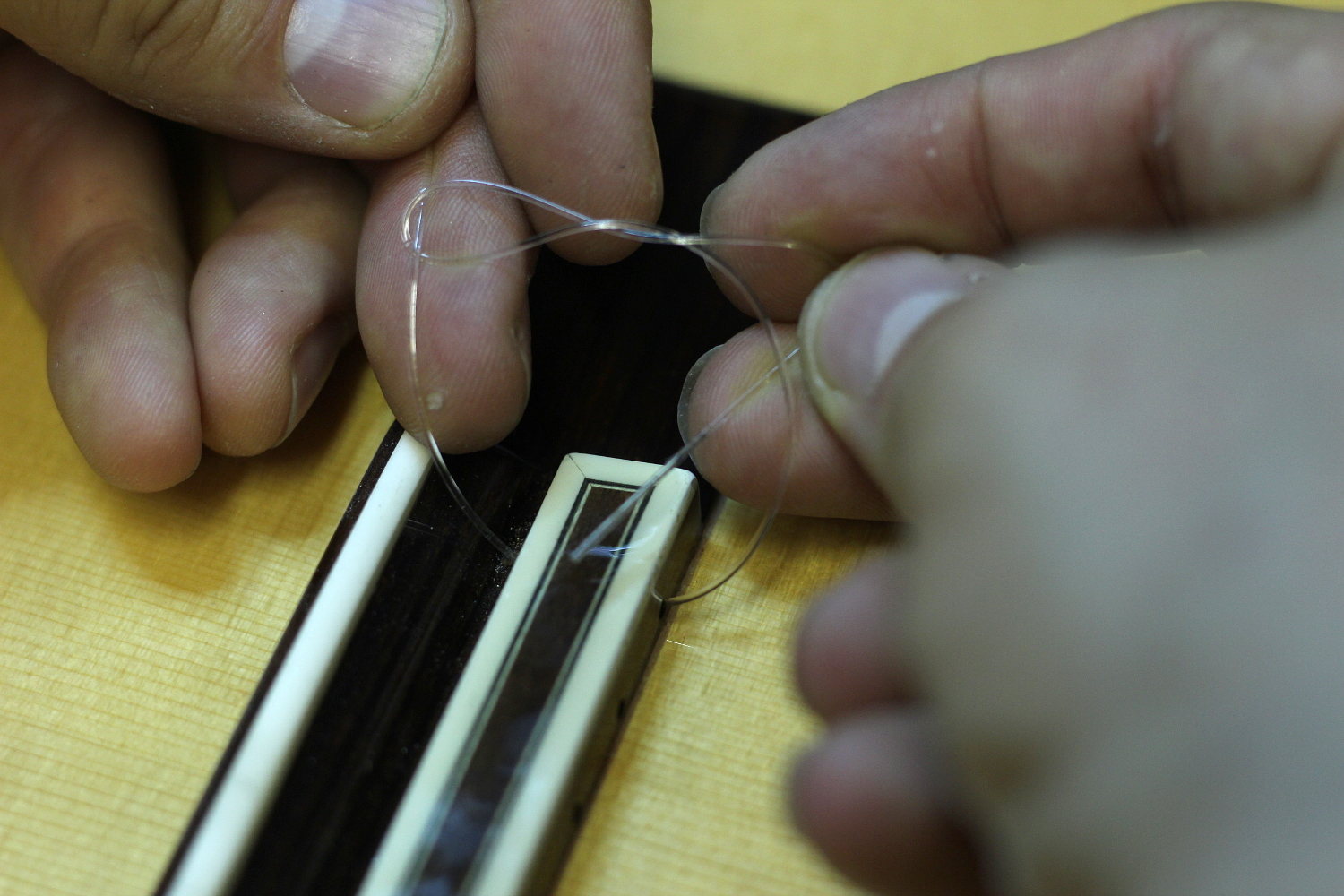 8. Lastly we just need to pull the knot tight and it will lock in on itself. That length of spare string you can see in the picture we're going to tuck underneath the loop we make for the B string for a little extra snugness: 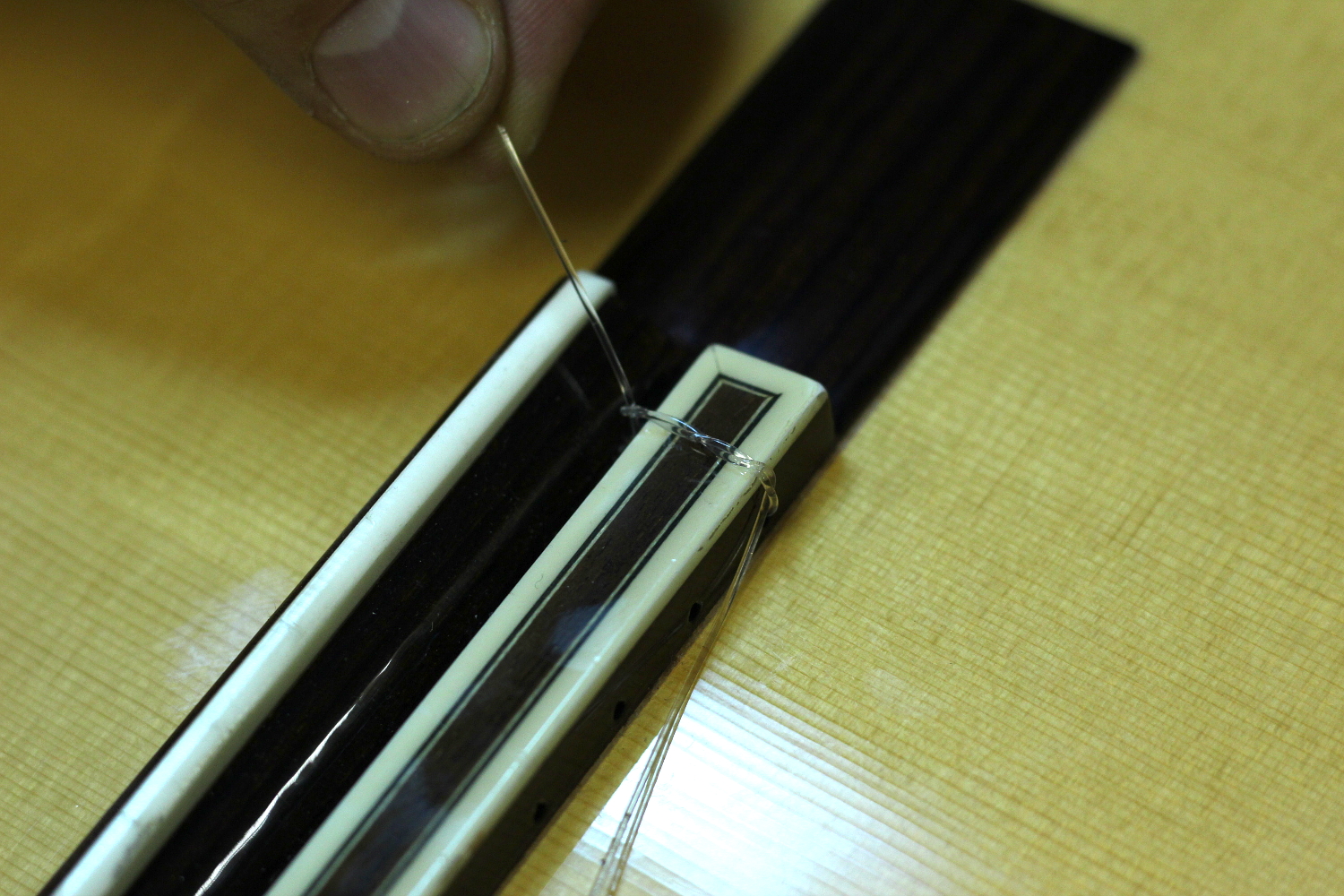 9. Don't worry, you've done the difficult bit! There are a few ways to tie the strings on at the other end so I'll show you how I do it. The string goes over the roller, underneath and up through the hole: 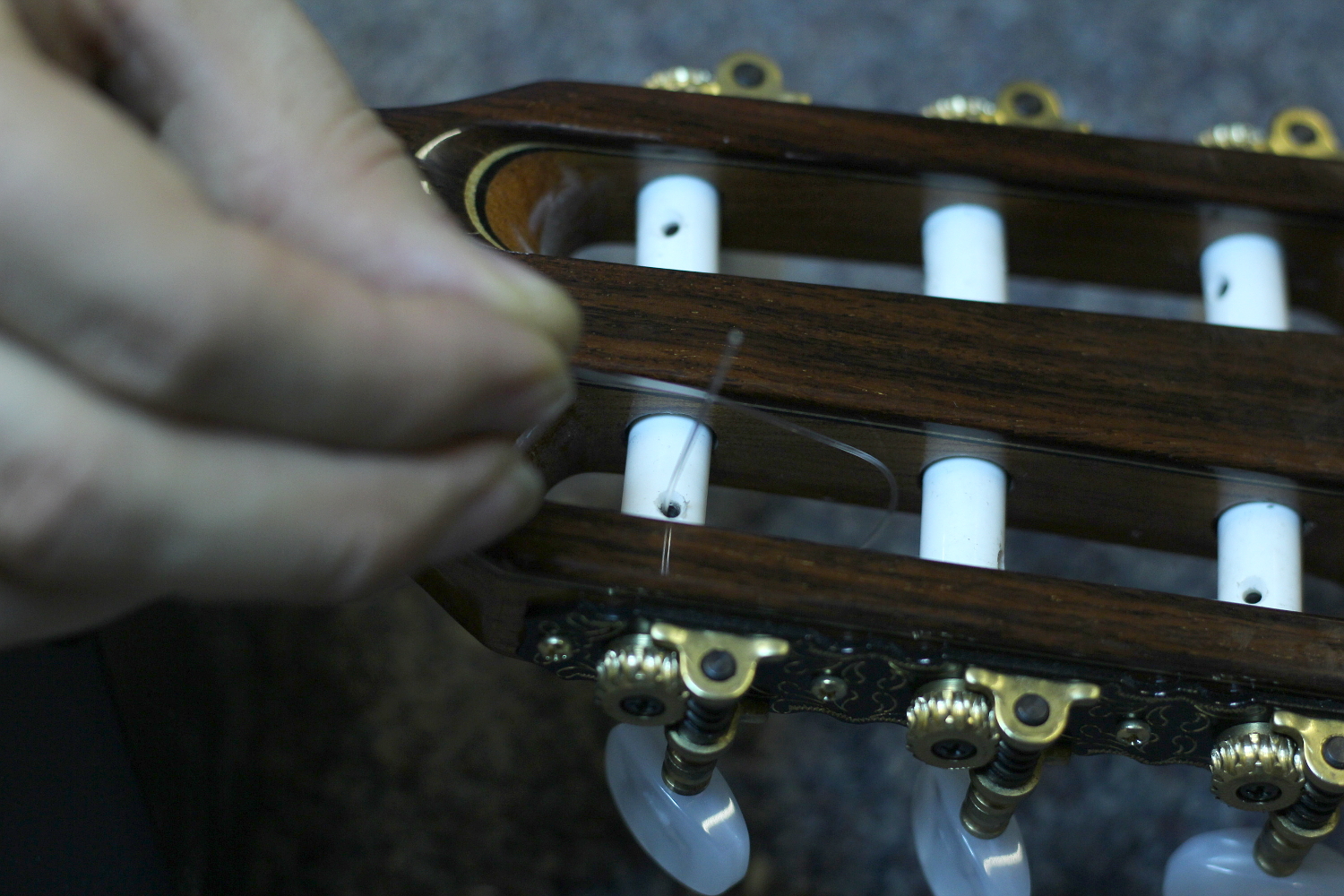 10. Now I'm going to pass it back through the hole, trapping the string in the loop: 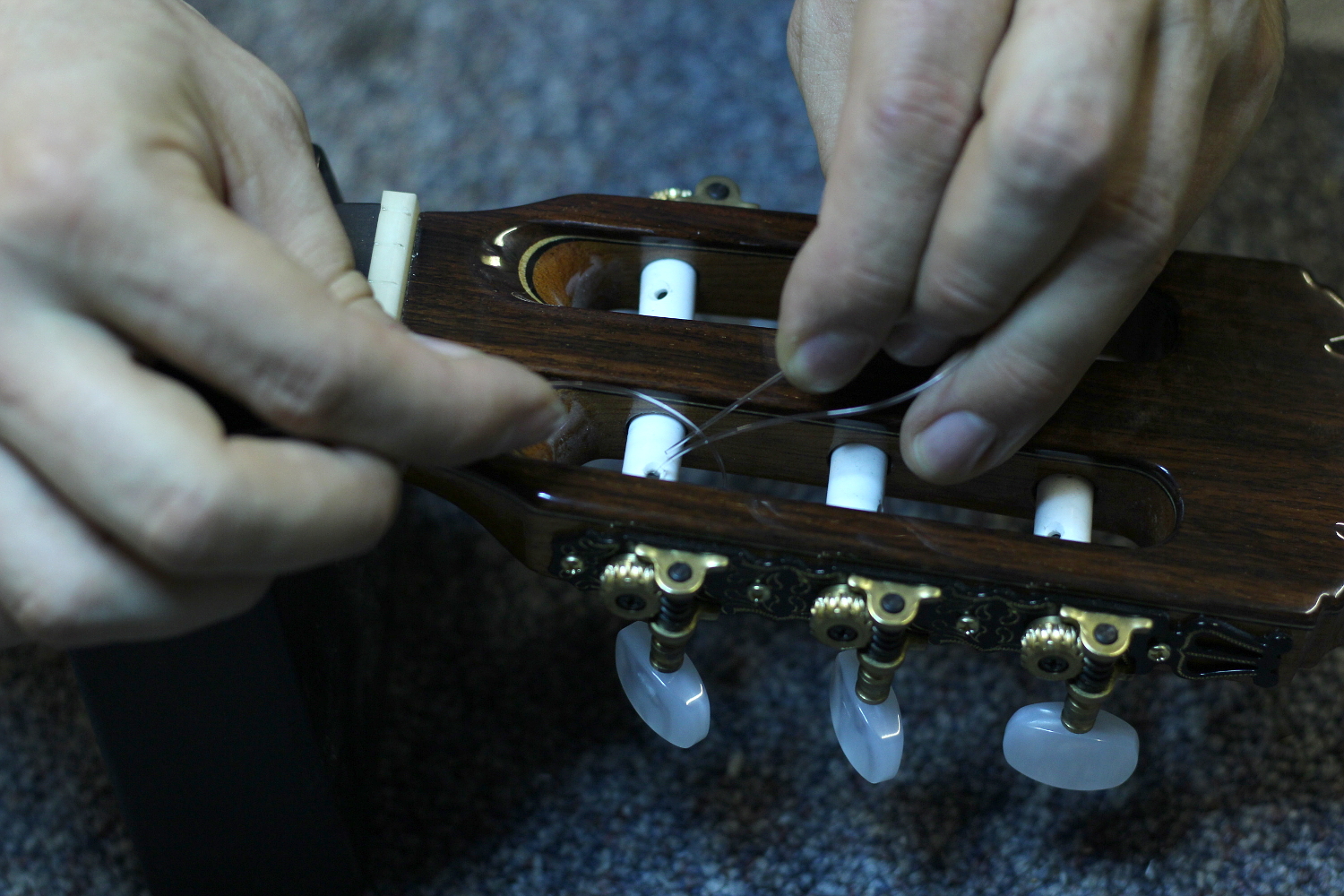 11. Pull it back through the hole and it locks the string firmly in place: 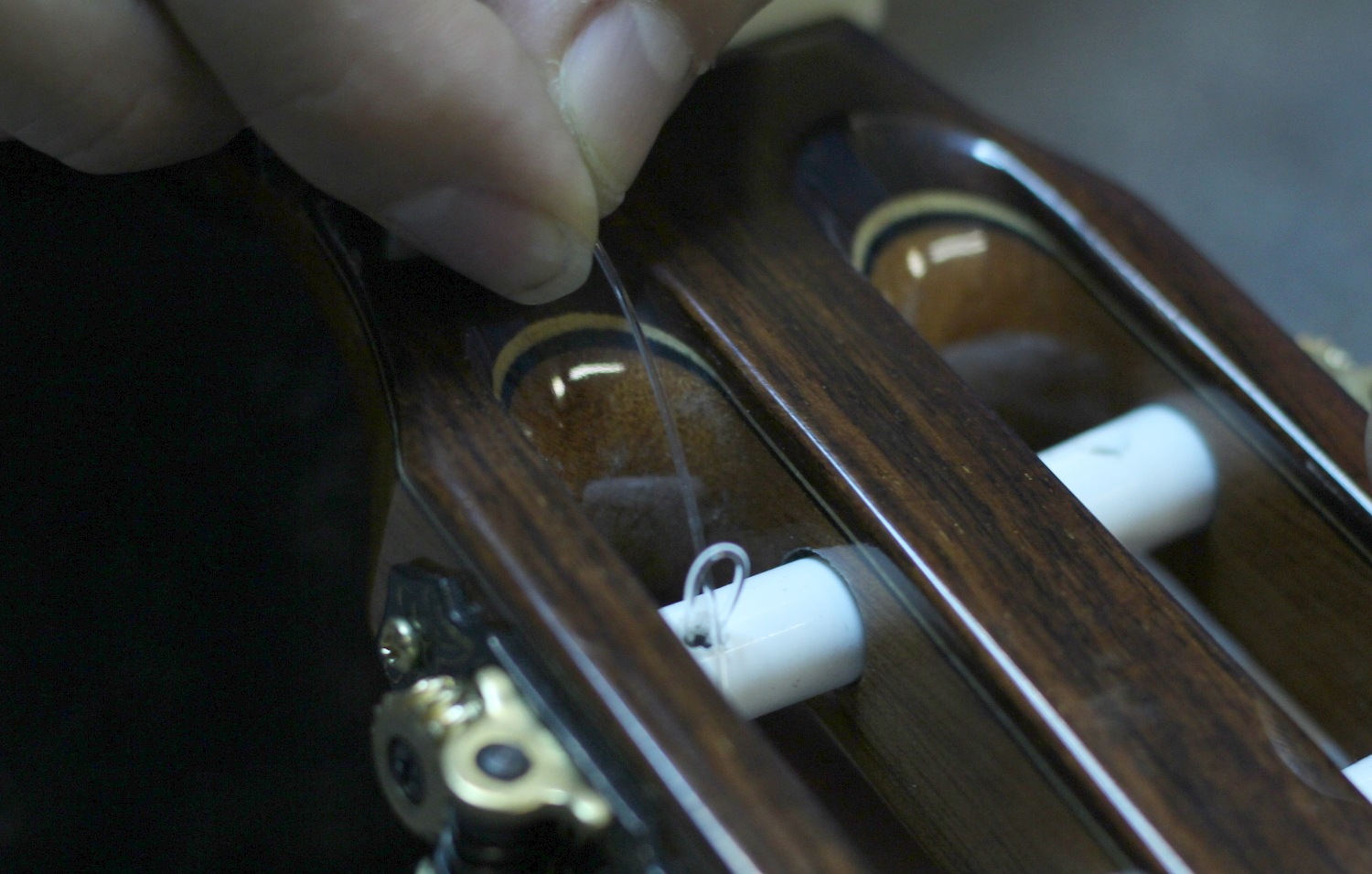 12. Next we just need to wind the string onto the tuner. I've left a bit of slack on the string which needs winding on and then we need to bring it up to pitch. Typically on classicals the two E strings wind outwards and the other four inward to keep the break angle from as the string passes over the nut reasonably shallow. Here's the E string winding its way: 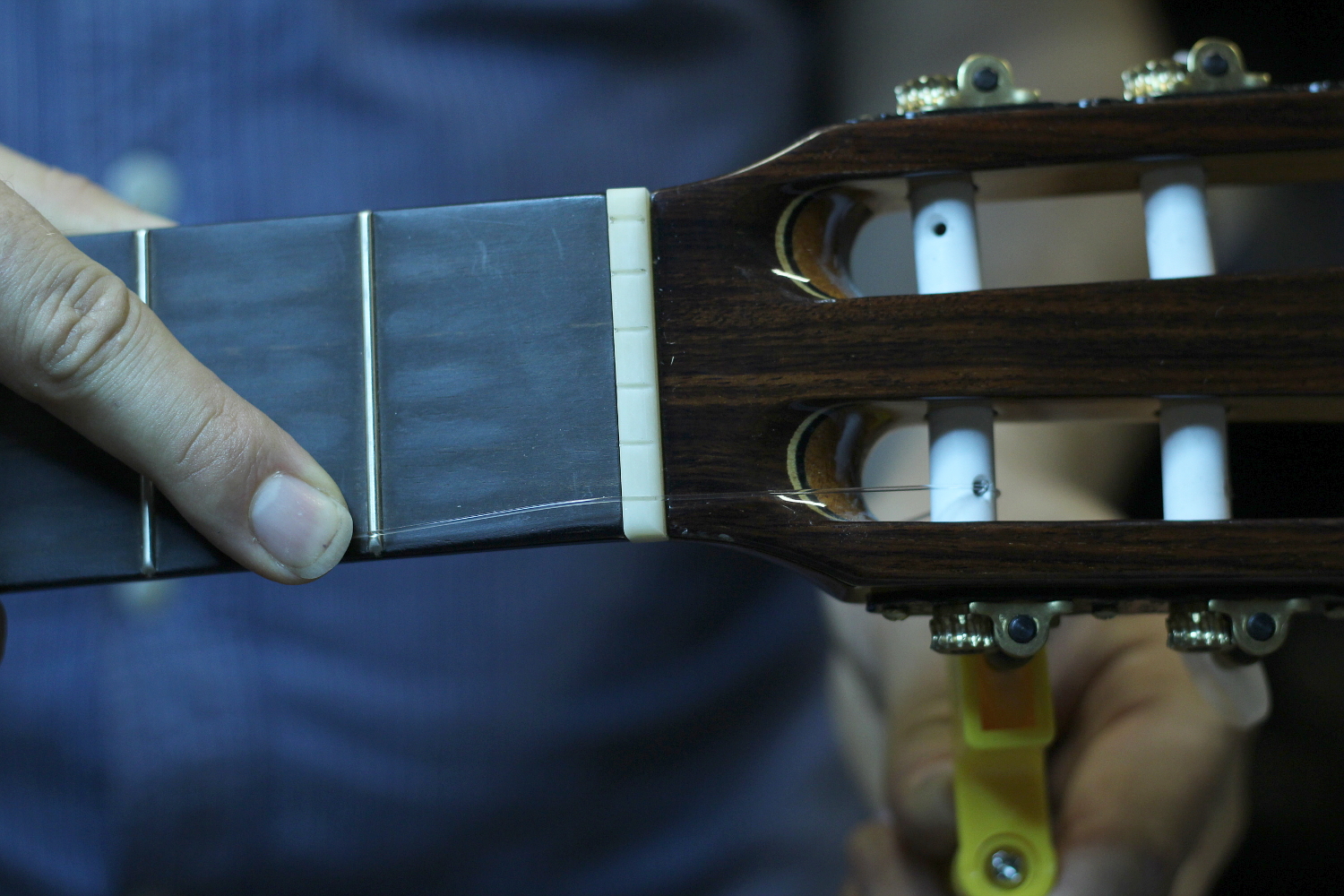 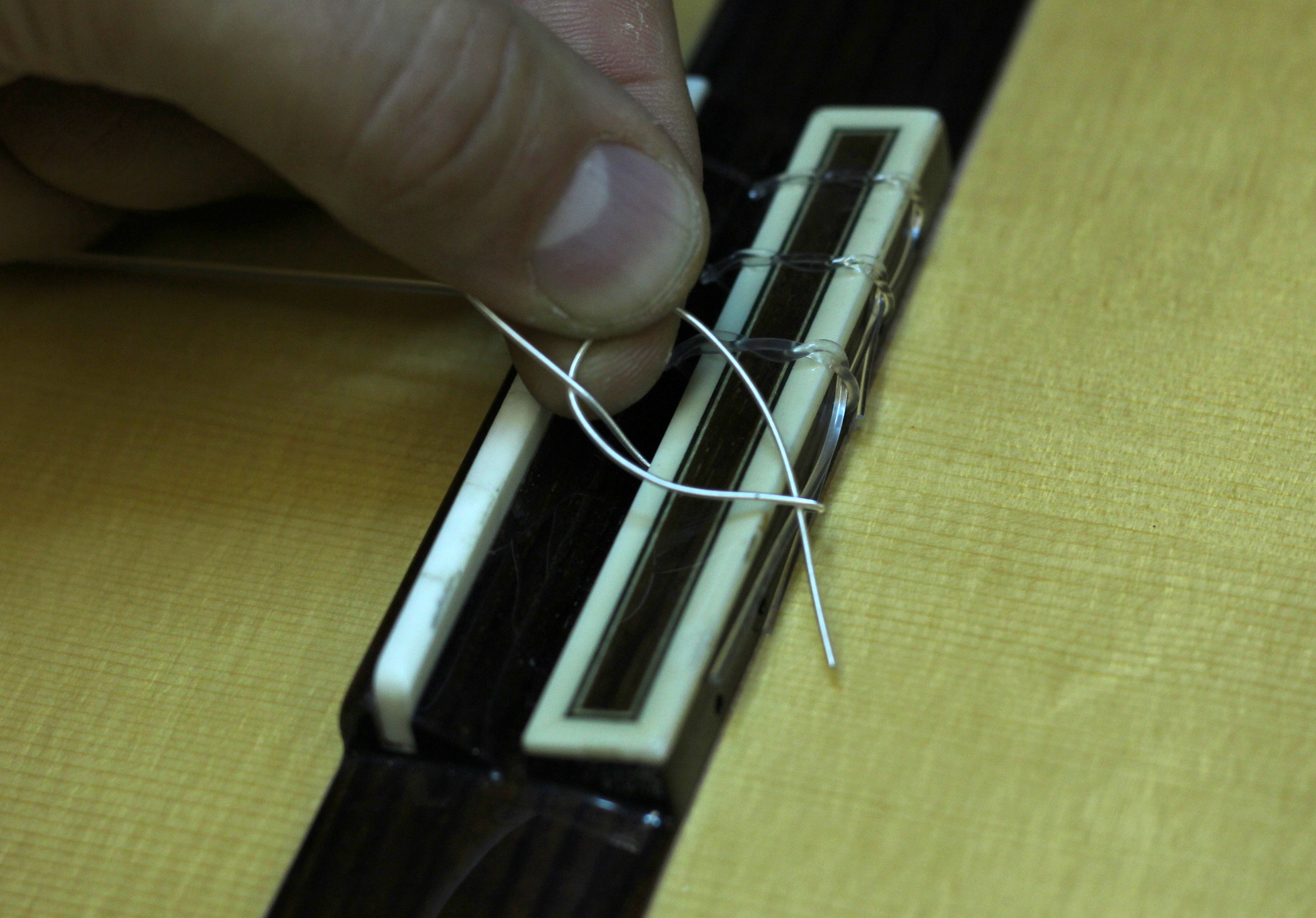 15. Here's a view of the finished tie block. You can see clearly the loop used on the bass strings, and that each string is tucked into the loop of the next string along. I've trimmed the ends so that they're not sticking out or trailing against the soundboard, which can be a cause of erroneous buzzing. It looks neat and should anchor the strings nice and strong: 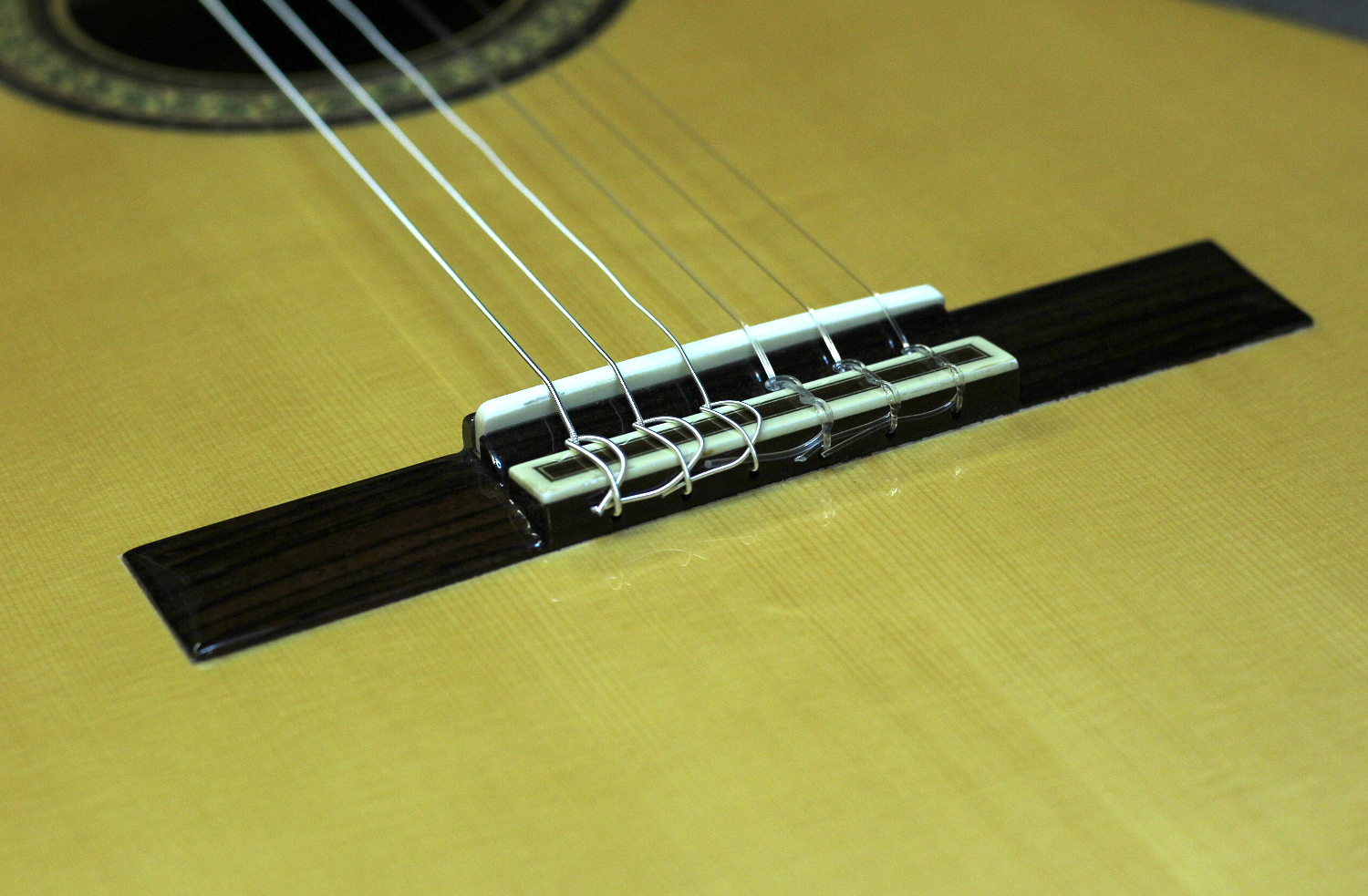 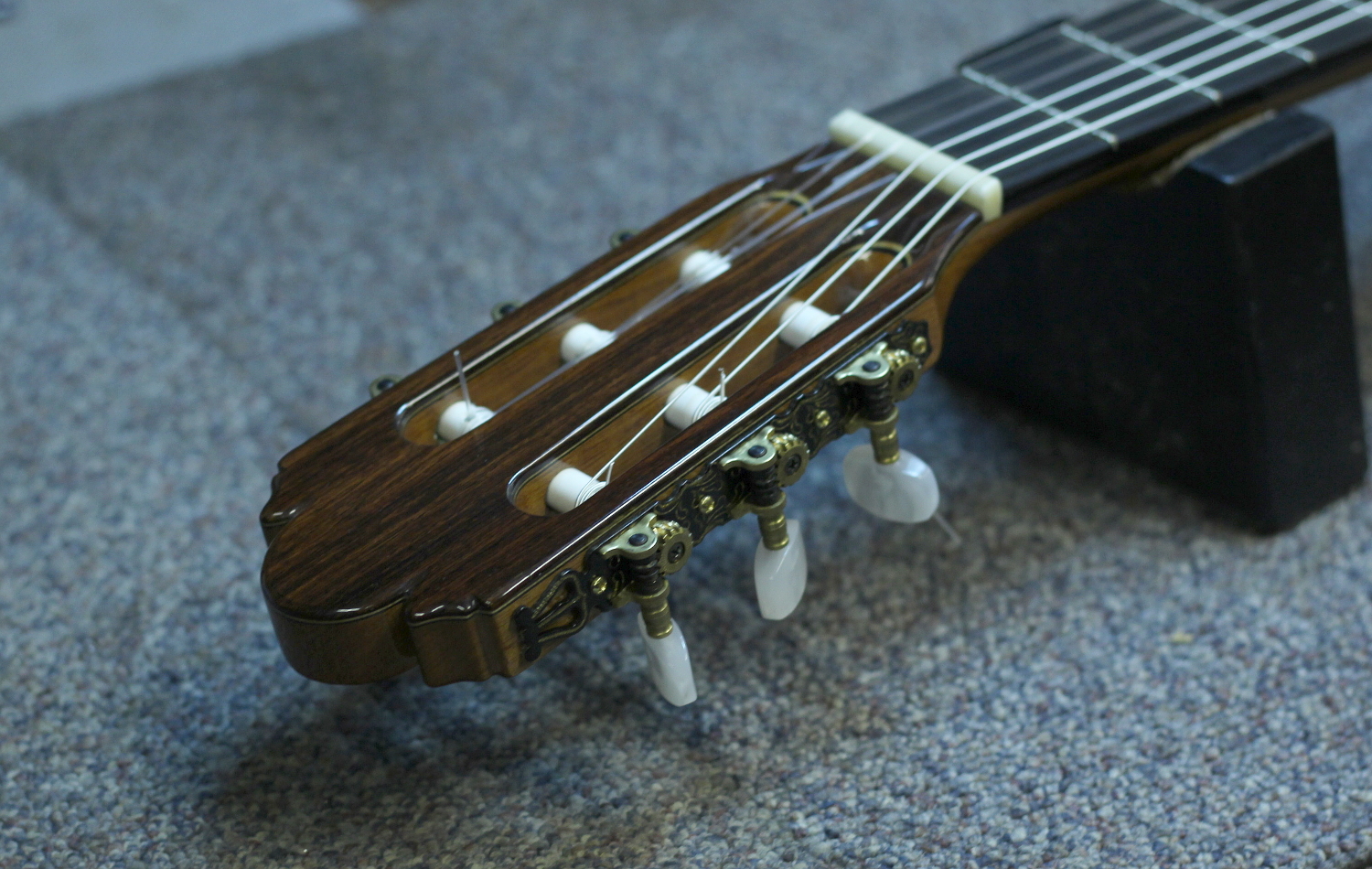 It's a little fiddlier than a steel string but give it a couple of goes and you'll find you get the hang of it pretty quickly.