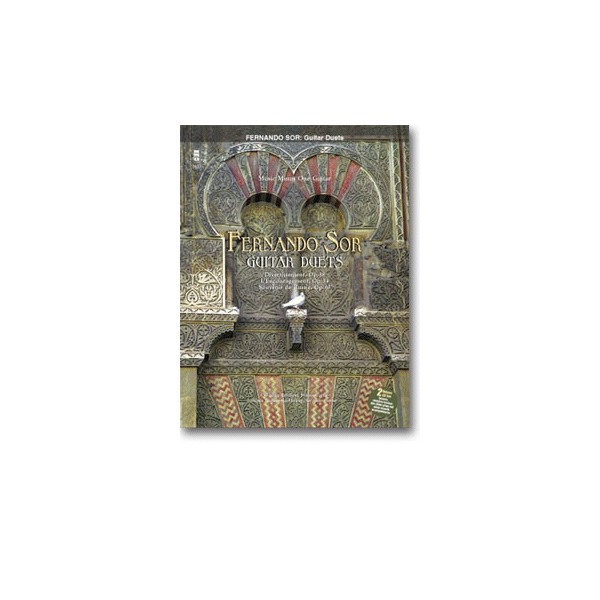 SOR, FERNANDO - Guitar Music Minus One Book and CD

These three long-form duets by Spanish classical guitar master Fernando Sor are a boon to every guitarist. Beautifully crafted melodies artfully orchestrated between the two guitars, and a technical approachability for all intemediate-level guitarists makes these a must-have. The three works presented here all come from the late 1820s and 1830s. The Divertissement is in three-movement form, whereas both L’Encouragement and Souvenir de Russie take the form of an introduction followed by a theme with variations, capped off with a dance-like finale. Both of these pieces, originally intended for the amateur musician, feature very approachable parts technically, with the primo part providing the main melody. Though not as exotic in flavor as one would expect from the title, Souvenir de Russie nevertheless shows influences from Sor’s sojourn in Moscow from 1823-1826. This piece is unusual in featuring a rich secondo part which complements the primo part to create very complex sound, as opposed to the more traditional soloist/accompanist format. This Music Minus One edition presents a sparkling performance of these duets from virtuosi Christian Reichert and Beata B?dkowska-Huang. Listen to their technique, either from the combined recording or from one of the solo parts presented separately: then you join either Mr. Reichert or Ms. B?dkowska-Huang to make your own beautiful music! Featuring music for players of nearly all levels, every guitarist will revel in a celebration of the classical guitar at its zenith.
Includes an expansive, newly engraved, authoritative performance edition of the music score, featuring both guitar parts, with performance suggestions from Christian Reichert and edited by both Mr. Reichert and Ms. B?dkowska-Huang, and printed on high-quality ivory paper: plus A compact disc containing the complete performance of the pieces in digital stereo: a second compact disc containing accompaniments to each piece, first minus the primo guitar part, then presented again minus the secondo part.

other products in the 'Music' category: