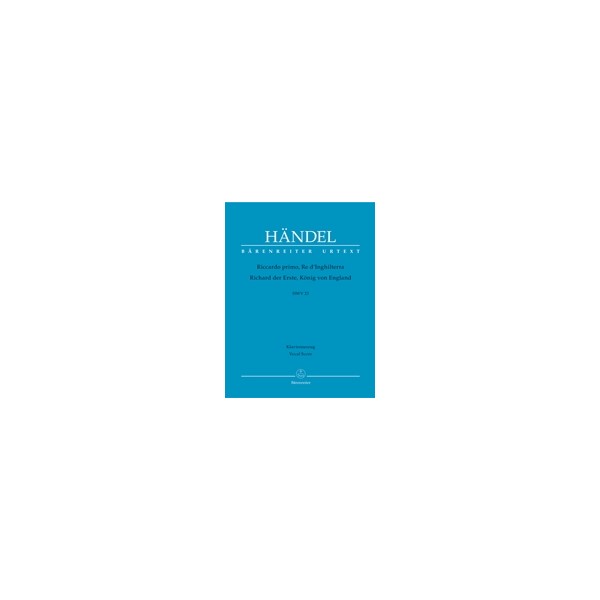 * n In his libretto for Riccardo primo, Paolo Rolli drew on Antonio Lotti’s opera Isacio tiranno which had been performed in Ve
In his libretto for “Riccardo primo”, Paolo Rolli drew on Antonio Lotti’s opera “Isacio tiranno” which had been performed in Venice in 1710. Handel needed a text with two great women’s roles, for the two best female singers of the day were members of his troupe – Francesca Cuzzoni and Faustina Bordoni. He had already written the operas “Alessandro” and “Admeto” for them. He began composing “Riccardo” in spring 1727, completing the first version on 16 May. However, following the death of King George I on 11 June 1727, the theatres remained closed. For Handel, who had become a British citizen in February 1727, the accession of George II to the throne offered new possibilities, and he embarked on a revision of the opera. With this, he was able to offer a new opera for the coronation festivities, the hero of which was one of King George’s charismatic forebears.
From May onwards, Handel thoroughly revised the present score, wrote some parts anew and expanded it with particularly splendid music. Handel and Rolli also improved the plot and introduced patriotic elements to honour the British monarchy.
The historic background is the third crusade against Saladin, the Sultan of Egypt and Syria, who had recaptured Jerusalem in 1187. Although King Richard I captured Cyprus and together with French crusaders stormed the fortress of Akko in the Holy Land, the crusade ended with a ceasefire and Jerusalem remained in Saladin’s hands. Richard was given the title ‘Coeur-de-lion‹’ by the English for his great military ability and bravery, although the Sicilians had first given him this name because of his relentless cruelty in clashes around Messina.
The vocal score is based on the Halle Handel Edition volume published in 2005, edited by Terence Best, and contains the second version of the opera which was premiered in November 1727.
- Based on the Urtext of the Halle Handel Edition
- Original Italian text with German singing translation
- Straightforward and easy-to-play piano reduction
- Detailed foreword in two languages (Ger/Eng)