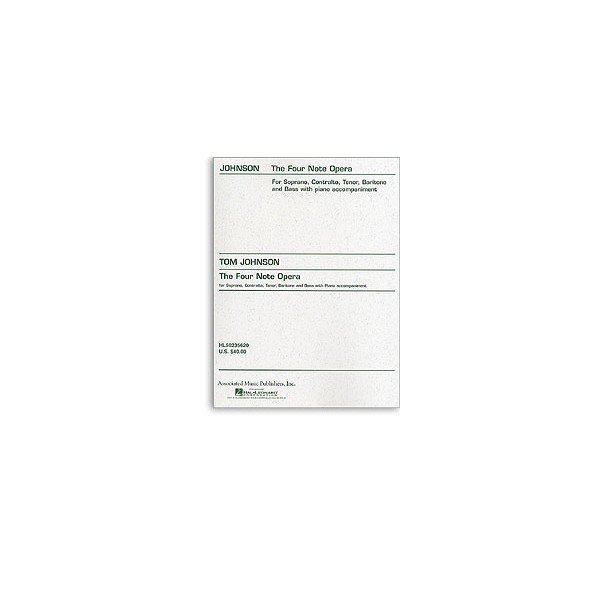 Synopsis:
A farce with music built on four notes: A, B, D, E. It ends in mass suicide, as the singers become immobile and the music slowly stops.

Composer Note:
I was 32 years old when The Four Note Opera was premiered, and that was 32 years ago. Now, with the wisdom one is expected to have at the age of 64, I should know everything about this early work, but I really don’t know much more than before. The only sure thing is that the crucial moment in the evolution of the piece was that evening very long ago when I read, with great excitement, Luigi Pirandello's Six Characters In Search of an Author. Normally characters are not even conscious of their existence on a stage. They are completely obedient to the author, they conform totally to the world the author creates, and they have no thoughts of their own. But Pirandello's masterpiece was different. His characters knew they existed in a theatrical space, and only for a couple of hours. They were aware of the audience, and of the author as well. It was not the kind of theatre that asks you to believe something that is not true. It was the kind of theatre that you have to believe, because everything is true.

Pirandello's vision had a strong impact on me, and for years one question lingered in the back of my mind: what would happen if, instead of Six Characters in Search of an Author, there happened to be some opera characters looking for a composer? It happened that some opera characters were looking for a composer, and about 10 years after reading Pirandello they found me and came to life in The Four Note Opera. This opera, my first, was premiered in 1972 in a little theater in New York called the Cubiculo, and it was an immediate success, taken over later that year by CBS-TV, then by the Netherlands Opera for a European premier the following season, and subsequently by other opera groups, both professional and non-professional, each year thereafter.

Naturally, I thought that writing other successful operas would be easy, now that I had such a good start, so three years later I wrote The Masque of Clouds, which really was a masque, with clear references to Elizabethan traditions. The main characters were the Lake (mezzo), the Forest (baritone), and the Clouds (two coloraturas), and they all had nice arias, and the idea might actually have worked if we had had a big budget and a large orchestra, but trying to do such a thing in a modest quick way was destined for disaster. The work has never been staged since.

I had always loved the American tradition known as \"shaggy dog stories,\" those repetitive stories that take a very long time to tell until they finally end with some dumb punch line, usually a simple word play or an ironic remark, so my next operatic attempt, in 1978, went in that direction. The result was five chamber operas, about 15 minutes each, which I staged myself in a small loft space in lower Manhattan. This was also less successful than The Four Note Opera, though three of these short operas are still done from time to time: Drawers, in which a solo soprano searches for her thimble, Dryer, in which a fisherman catches fish and hangs them on the clothes line to dry, and Door, in which two women sing \"yawn\" a lot, and wonder whether they should answer the door.

Next came Sopranos Only in 1984, which is basically a procession for six sopranos, accompanied by flute, violin, harp, and cello. With so many sopranos in the world, there is always an need for new soprano roles, and this 35-minute piece does serve a function- most often in workshops in American universities and conservatories.

But a real success story began in 1988 with the premiere in Bremen of Riemannoper: a full evening piece for four singers and piano, with libretto extracted exclusively from the Riemann Musik Lexikon, the German equivalent of the Groves Dictionary of Music. German musicology is terribly serious, and the definitions are extremely terse and precise, so the results are bound to be amusing when singers do exactly what the text says. Take the dictionary definition of aria di bravura, for example:

So the baritone sings one verse of \"rage rage rage,\" another of \"revenge revenge revenge,\" another of \"triumph triumph triumph,\" and there you have it. Riemannoper is esentially untranslatable, so it appears only in places where audiences understand German, but its 28th staging was launched in Halberstadt recently, and some years it is performed more than The Four Note Opera.

Still, The Four Note Opera is the long term success, with six or eight translations and at least 70 different stagings that I know of. I have only seen a tiny percentage of these interpretations myself, but these have provided me with a lovely bank of memories. I recall particularly well, for example, the world premiere night in that little theater, with about 15 people in the audience, almost all personal friends, and how surprised we were that the house was sold out on the following weekend. I remember the French premiere, directed by Henry Pillsbury at the Festival d’automne in Paris in 1982, with rather slow tempos and a particular French elegance. I remember a staging in Padua in 1984, with a stage set consisting simply of colored cubes, and with a real chorus of 40 volunteers. Nor will I ever forget the performance in Poland, where a young tenor with the Warsaw Chamber Company sang so beautifully that I could hardly forgive myself for not having given him a second aria. The memories continue to accumulate, and two recent stagings surprised me all over again. One of my favorite moments in the Pavana production in Valencia was the 40-bar duet, presented as an intense 40-card poker game. Why didn’t other stage directors ever think of that? An equally original and stimulating moment was the final scene, as mounted by the Atelier Lyrique de Franche Compté. The faces of the four singers peered through four holes of a painted panel, suggesting the four notes, but also suggesting that they were prisoners locked into scaffolds. The same image, without the faces, was also the poster advertising the production.

The opera has quite a different look each time it is mounted, and indeed, the success of The Four Note Opera no doubt has much to do with its flexibility. Each new cast changes the characters, each new designer changes the look, and the result is always fresh. My composing in the past 10 years has been more abstract, often mathematically based, and I don’t follow these new transformations of The Four Note Opera very much anymore, but then, the piece is 32 years old now, and like any 32-year-old, it must now make its own way. There is really nothing more a father can do.