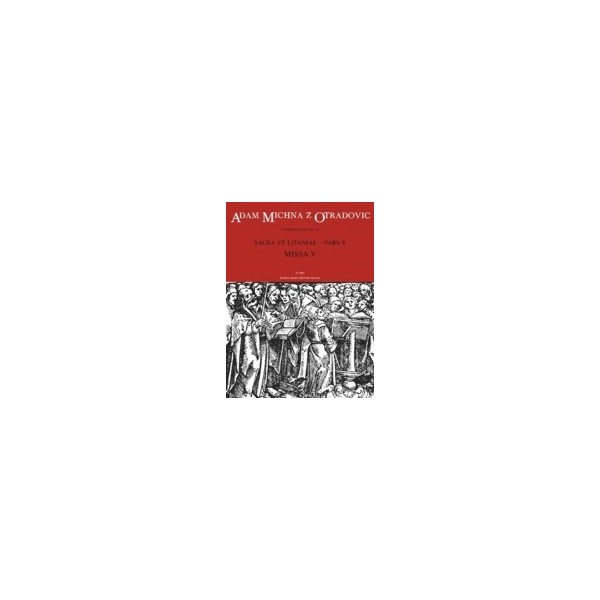 The largest Czech collection of Latin liturgical music Sacra et litaniae was first published in a Jesuit printing house at the Prague Clementinum in 1654. The work contains five Masses, a Requiem, a Te Deum, and two litanies. Like the other parts, Michnas Mass V is published for the first time in a new critical edition by professor V. Belsky (notation) and Dr. Jiri Sehnal (text, edition supervisor). The approach Michna chose in setting the fifth Mass in Sacra et litaniae is well known from his earlier collection, Officium vespertinum. Here, as there, the composer treats all parts of the Mass invariably as dialogue between a concertante solo bass, and a largely passive, homophonic quartet. The melodic of the bass part is notable for the fanfare melody of a broken D-major chord. This, plus the two sharps placed by the composer in the key signature, may tempt one to take the key of this Mass to be an unambiguous D major. Attentive listening, though, will reveal this is not so. With some reserve, one may approximate, that the fifth Mass is written in the seventh ecclesiastical mode. Composers in Michna·s time liked to group compositions in their collections by the dozen, or half-dozen. Rather unusually then, not counting the Requiem, Michna·s Sacra et litaniae consists of five Masses. The title of the second of them, relating to the Christmas season, and the number five of this Mass may attempt us to try and match the individual Masses in the collection with the corresponding seasons of the ecclesiastical year. Allowing for a degree of imagination, it might then be hypothesized that the fifth Mass would have been destined for Whitsuntide.