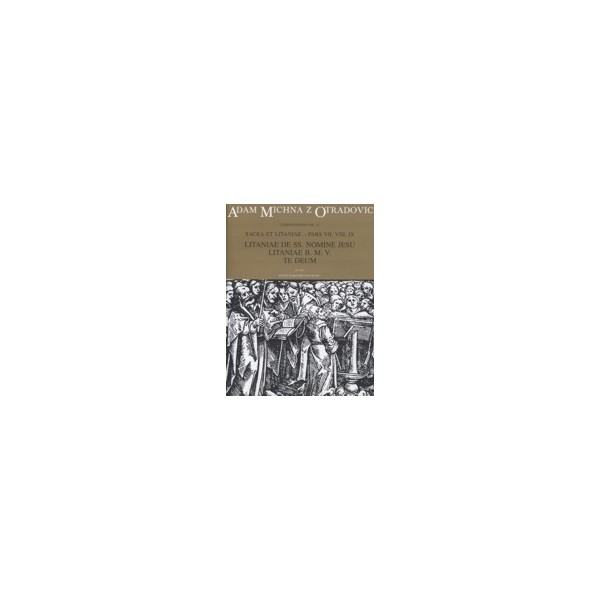 Adam Michna z Otradovic (1600 - 1676), a contemporary of Schutz and Carissimi, is regarded as the most remarkable figure of Czech art in the 17th century. Apart from having been an outstanding composer of both simple church songs and sophisticated figural works, he also left to posterity a highly individual output of verse. His entire known production was inspired exclusively by the world of Catholic spirituality. The twelfth volume of a new complete edition of his works, being published now, contains Litaniae de SS. nomine Jesu: Litaniae B.M.V.: and Te Deum. This is the final part of Michna·s most extensive collection of sacred music, Sacra et litaniae, comprised of six masses, two litanies, and a Te Deum. The collection·s individual compositions probably date from different periods. For its part, the Sacra et litaniae was first published in 1654, like most of Michna·s production by the Academic Print of the Clementinum in Prague. The Litaniae de SS. nomine Jesu is economical in terms of duration, and is characterized by restrained expression, with the alternation of tutti, concertante soli and double choir, that last feature assigning it a solemn note. The vocal combination requires two four-voice choirs (each with four proper soloists), the prescribed instrumental accompaniment consisting of two violins cum aliis instrumentis ad libitum - here, four violas. The Litaniae B.M.V. has a five-voice choir (with two sopranos) and soloists. The instrumental accompaniment consists of two violins, a viola, plus further optional instruments ad libitum. This format accounts for the work·s clear, radiant sound. The Te Deum, featuring a more modest combination (without trumpets) than other works, for four-voice choir with soloists, two obbligato violins and three trombones ad lib., was written for a now unknown festival occasion. The text·s vibrant imagery offered the composer an opportunity to produce sharp musical contrasts and expressive invocations.