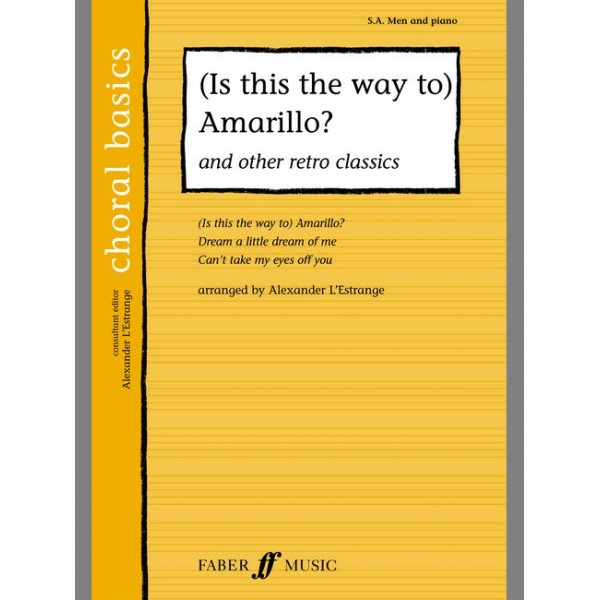 The love of all things retro is a collective cultural obsession through which we celebrate a fondness for bygone days. This collection represents three of the best-known and classic retro hits that, over time, have captured hearts and imaginations everywhere.Although written by Americans Neil Sedaka and Howard Greenfield, (Is this the way to) Amarillo? was a massive UK hit in 1971 when it was recorded by Tony Christie. The song was re-released in 2005 when comedian Peter Kay teamed up with Christie to record it for Comic Relief. Dream a little dream of me was a classic 60s hit made famous by Mama Cass Elliot of the Mamas and Papas, although it was originally written in the 1930s. The collection is completed with Can’t take my eyes of you that first became a hit in 1967 with top easy listening crooner Andy Williams.If you are looking for straightforward and rewarding repertoire for your beginner choir, then you need look no further than Choral Basics the perfect series for singers of all ages. The Simple 3-part choral arrangements for soprano, alto and a combined part for men’s voices make the series perfect for choirs with a dearth of males or whose male singers have unstable or changing voices. The rich array of repertoire is bound to be a hit with younger singers and the technical abilities of choirs at this level have been taken into consideration. Straightforward and idiomatic piano accompaniments have been included and are designed to support the vocal lines, without putting pressure on staff with less developed keyboard skills. Choral Basics are great value for money providing a contrasted set of arrangements for the end of term concert.