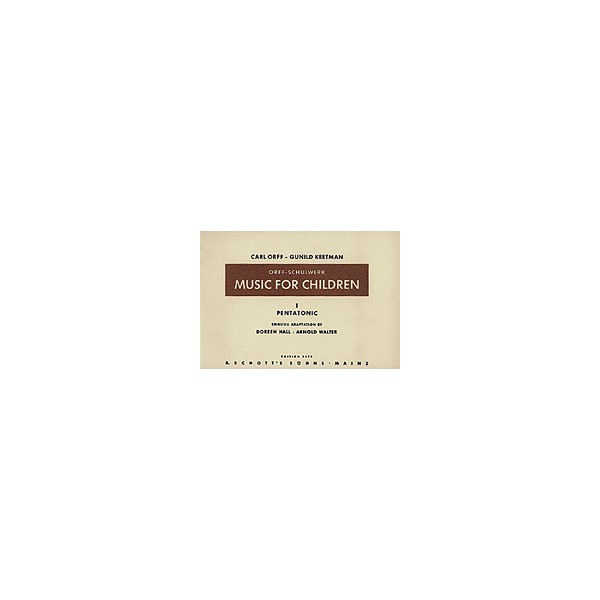 Voice, Recorder And Percussion - Score For Voice And/or Instruments

Carl Orff devoted much of his life to the development of a philosophy of Music for Children, based on his belief that music is the natural outcome of speech, rhythm and movement. His ideas and pioneering work have had a major influence on music and dance education throughout the world and today that work continues under the guidance of leading teachers and educators in many countries.
The five basic German volumes of \"Music for Children\" by Carl Orff and Gunild Keetman were published between 1950 and 1954. Edition have since been published in Bolivia, Brazil, Canada, Czechoslovakia, Denmark, Estonia, France, Ghana, Great Britain (including a special Welsh edition), Greece, Italy, Japan, Korea, Latin-America, the Netherlands, Portugal, Spain, Sweden, Taiwan and the USA.
In 1952 the first edition in translation appeared, an English language adaptation by Doreen Hall and Arnold Walter for their Canadian and American students.
A few years later, Margaret Murray independently developed a version (1957-1966), essentially to fulfil the needs of United Kingdom teachers.
Inevitably the considerable growth of Orff-Schulwerk in the United States led to the publication of the American Edition (1977) to satisfy the requirements of a different educational system and national heritage.
Orff-Schulwerk: Music for Children has proved itself to be a stimulating source of material for music teaching. Carl Orffs fundamental educational ideas have revitalized music education in nursery schools, at all levels of primary and secondary education and in special music schools, based on the concepts that: - music, dance and language are inter-related and animated through rhythm. - when children discover, invent, improvise and compose, their experience of music is intensified. These creative activities are complementary to those of interpreting and listening to music. - all who take part are encouraged to contribute, not only vocally but also instrumentally. - the Orff approach to music education is many sided: it is concerned with practical music-making, it provides fundamental experiences and it lays the foundation for a comprehensive musical training. - movement games and activities for body awareness in space, time and flow, lead to movement improvisation and dance forms. - music and dance have been notated in many different ways in history. Various ways of writing down sounds and music, as well as playing from and interpreting different kinds of sources are being explored.
Today, countless teachers and institutions are using these ideas. More and more teachers look for ways of invovling their students in active music making. In particular, they seek to challenge their pupils creativity by the use of music, dance and speech - as media of human expression - as a foundation of all education.
A prerequisite for work in Orff-Schulwerk is the artistic and pedagogical training of teachers. The Orff Institute was founded in 1961 as a Department of the Mozarteum, in Salzburg, Austria. Training offered includes a four-year diploma course, a two-year post-graduate course, and a one-year-course in English.
At the opening of the Orff Institute in Salzburg in 1963, Carl Orff ended his speech with a quotation from Schiller: I have done my part, now do yours. That challenge has been taken up by teachers worldwide.

Hall/Walter Edition
Based on Volumes 1, 2 and 4 of the original German Edition \"musik für Kinder\", english adaption with additional material by Doreen Hall and Arnold Walter.