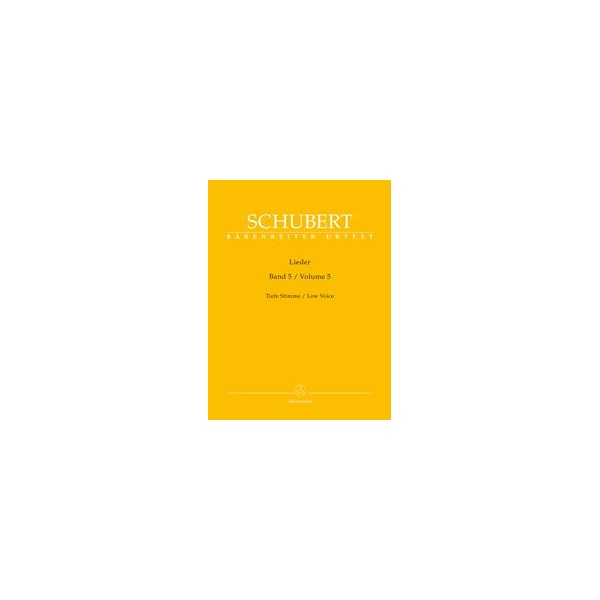 Excellent new engraving based on the New Schubert Edition

Foreword by Walther Dr discussing the history the works&rsquo: composition
and transmission, together with a list of sources for each song (Ger/Eng)

English translation of the song texts by Richard Wigmore

As a continuation of the new Urtext edition of the Schubert lieder, Walther Dr has now edited volume five for high, medium and low voices. Volumes 1 to 4 of this edition contain mainly lieder which Schubert himself saw into print (in his own choice and order) and in the fourth volume works from the last two years of his life are included. The lieder in volume 5 onwards are strictly presented in the order of Deutsch&rsquo:s Thematic Catalogue which means that in principle they are arranged chronologically.

The lieder in volume five were composed in the years 1811 to 1814. The first &ndash: Hagars Klage (D 5), dated 30 March 1811 &ndash: is also his first complete surviving song. The first eleven lieder are evidence of his early studies (1811&ndash:1813/14). During this period Schubert immersed himself in Johann Rudolf Zumsteeg&rsquo:s ballads and lieder and wrote Italian arias during his composition lessons with Antonio Salieri. He also composed a single strophic song (Klaglied, D 23), which &ndash: the only one of these songs &ndash: was published shortly after his death in November 1830 as op. 131, 3. His apprentice work, as it were, was the major ballade Der Taucher (D 77) which was composed between 1813 and roughly the beginning of 1815. Probably not by chance, his first complete opera (Des Teufels Lustschloss, D 84) was written at the same time. He also set fourteen poems by Friedrich von Matthisson exploring the principle of the strophic lied.