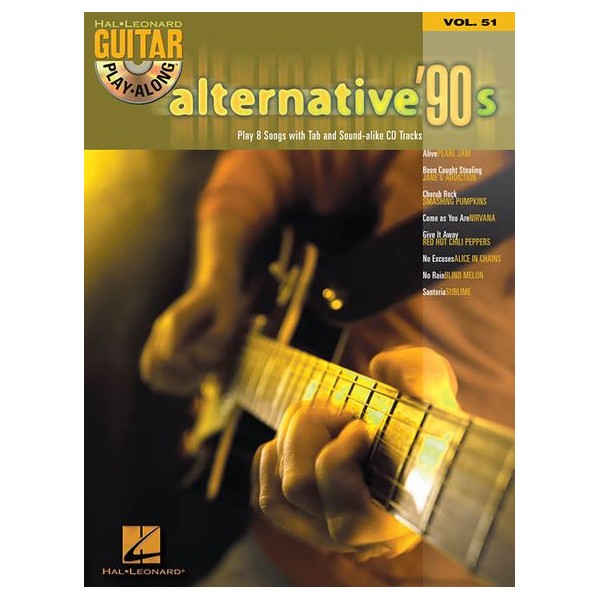 The Guitar Play Along Series is an innovative style of song book that allows you to learn the song, then play along. With Guitar tabs, melody and lyrics in the book, and an accompanying CD, you have all you need to Play Along with some Alternative 90s Rock . If you are a fan of rock music, and you just love those grungy, overdriven Guitars and the angsty lyrics of Generation Y, the Guitar Play Along Alternative 90s Tab book is perfect for you. With the Guitar sheet music, you can learn songs like Alive by Pearl Jam, Come As You Are by Nirvana and Santeria by Sublime, and 5 more classic songs of 1990s rock. Included is Tab as well as melody line and lyrics, so you can learn the Guitar part and sing if you so desire. After youve learned the song, you can literally Play Along with the accompanying audio CD. Playable on any CD player, you can first listen to the track as it should be played and then listen without the Guitar part, so you can fill in as if you were the lead guitarist in your favourite bands. Not only this, but play the CD in your computer (or Mac) and you can use the bundled software to magically change the tempo of the recording, allowing you to practice at a slower pace until you can play it up to speed. Not only does the Guitar Play Along Series allow you to take the spotlight with your favourite bands, it also helps you to become a better guitarist and musician, by allowing you to practise playing with a real band. So if youre after that classic Alternative 90s rock sound, the Play Along Volume 51 is the perfect song book for you.