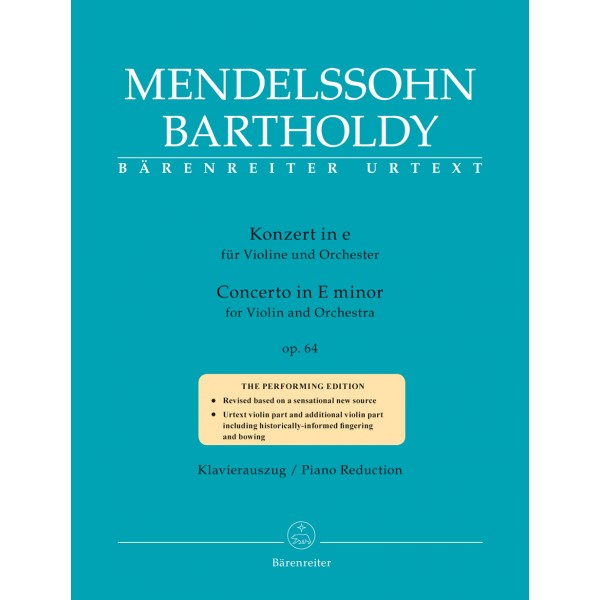 Edition for violin and piano

Mendelssohn’s Violin Concerto Op.64, is a key work of the 19th century, adhering to the classical style of Beethoven while pointing the way to the romantic ethos of Brahms. It has long been known that Mendelssohn performed the work with three soloists in succession: Ferdinand David, who worked closely with the composer during its composition and played it at the première; the ‘child prodigy’ Joseph Joachim; and Hubert Léonard, a young Belgian virtuoso about whom little is known.

As proof sheets for the Violin Concerto in E minor were long considered lost, it could be described as somewhat of a sensation when proofs for the solo violin part resurfaced together with a letter from Mendelssohn to Léonard.

The letter informs us that the composer invited Léonard to his home in Frankfurt in order to make his acquaintance. It was already known that Mendelssohn had given proof sheets to David; now we know that he also gave some to Léonard.

It is safe to assume that all of this was done with Mendelssohn’s approval. That the young violinist made a positive impression on the composer is confirmed in the latter’s correspondence following their joint performance. Mendelssohn is full of praise for Léonard’s playing and offers to lend his support in finding employment in Germany.

This revised edition of the Mendelssohn Violin Concerto (only the orchestral parts remain unchanged) includes a separate booklet on performance practice.

The editor, Clive Brown, is an acknowledged expert on Romantic performance practice.

- With a separate booklet on performance practise (BA9060) (Eng/Ger)

- Violin & Piano in the revised late (popular) version (THIS VERSION)