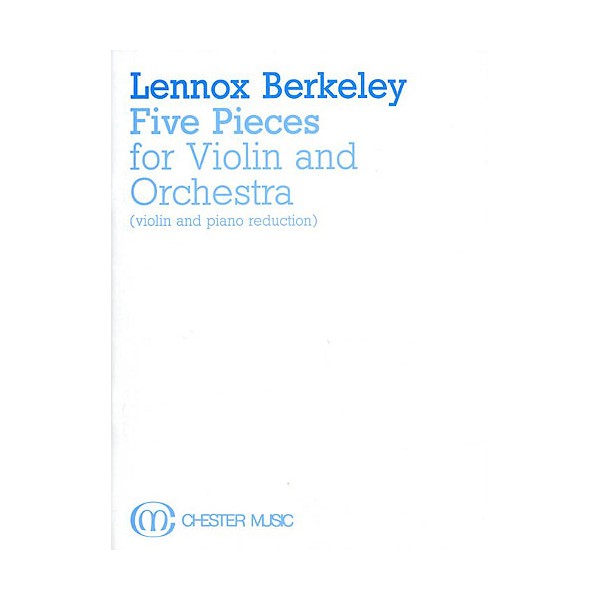 Five Pieces for Violin and Orchestra was commissioned by Frederick Grinke and completed on 20 December 1961.

The BBC Symphony Orchestra with Frederick Grinke (violin) and conducted by the composer, gave the first performance on 31 July 1962 at the Royal Albert Hall, London during the BBC Proms season.

This work is so constructed that each piece is complete in itself and can be played separately, while at the same time the whole set of five constitutes a structural unit. A basic motif consisting of a rising semitone followed by a falling tone, and its inversion plays an important part in every piece. Thus the first piece, which is of a slow and meditative character, begins with this theme in the bass. It is also heard in the first entry of the solo part, and thereafter every episode is in some way derived from it. The next piece, a vigorous and strongly marked allegro, uses the semitone of the original figure as its starting point. A second theme appears, first on the horns and is later taken up by the solo violin, while a third section has the initial idea as its accompaniment. Next comes an extended scherzo in free form very closely based on initial motif. The fourth is a purely melodic piece containing allusions in its middle section to the basic figure. Here the strings only are used for accompaniment. In the first section, violas and cellos are divided in the middle section, and all the strings are used in the last, which is otherwise an almost exact repetition of the opening. The Finale is a lighter movement than the others, concerned mainly with giving the soloist material for display, but not unconnected with what has gone before.