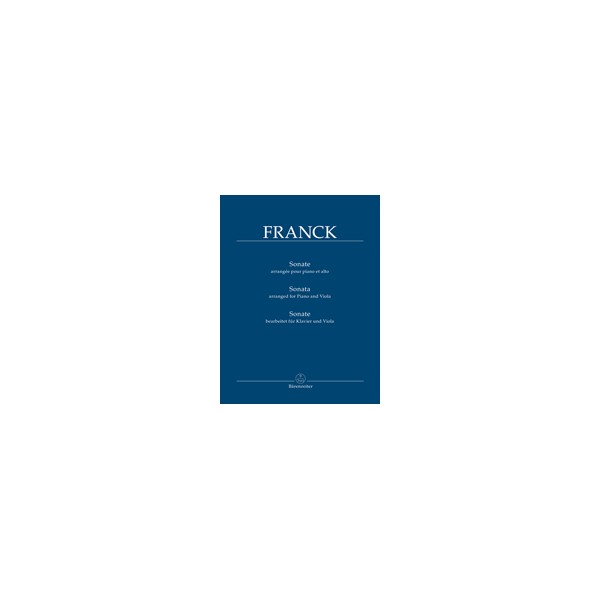 N.B. This arrangement is in A major, the same key as the original version for violin and piano

An alternative version in D major is published by Viola World

Cesar Franck’s Sonata for Piano and Violin is one of the most treasured works in the violin repertoire, a masterpiece of cyclic form with a gracefulness and expressive force almost paradigmatic for the age of musical Romanticism. This work was composed in 1886 and was dedicated to the Belgian violinist and composer Eugène Ysaÿe.

After Franck’s death in 1890 the original publisher of the Sonata, the Parisian house Julien Hamelle, announced an arrangement of the work for viola, but it has not been possible to locate any copy of this publication. The present arrangement for viola is largely based on Jules Delsart’s arrangement for piano and cello, the only version of the Sonata which the composer authorized. However, the viola part here also adopts extensive passages in their original register or remains in the middle octave, especially in those passages where the cello lies two octaves beneath the violin.
Being set in the alto register, the part thus lies between the other two string versions, lending the Sonata a delightful hybrid hue beyond the brilliance of the violin and the sonorousness of the cello. The piano part has been left intact and is thus identical to that of the original version.

The edition is rounded off by an informative text on the genesis and reception history of the Sonata (Ger/Fr/Eng).