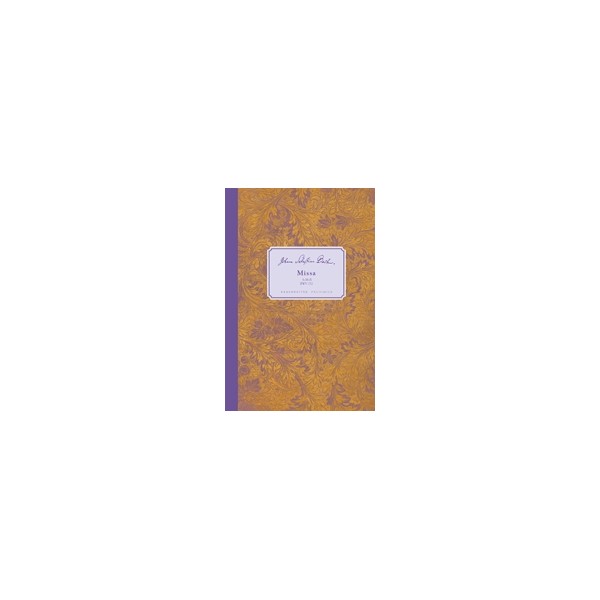 * Johann Sebastian Bach’s »Opus ultimum« is the second publication
in the BÄRENREITER FACSIMILE series, following that of Mozart

Johann Sebastian Bach’s “Opus ultimum” is the second publication in
the
Bärenreiter Facsimile series, following that of Mozart’s Jupiter
Symphony.
The work was completed in 1748/49, after the Art of Fugue, shortly
before Bach’s death.
This late work is as concentrated and rich in compositional
technique as scarcely any other
work. As early as 1818, Hans Nägeli enthusiastically described the
Mass as the “greatest
musical artwork of all time and all nations”. Since then, it has
been ranked as an icon of
music history.

One of the primary functions of a facsimile is the preservation of
such a cultural heritage,
particularly when the manuscript (as is the case with the Mass in B
minor) is endangered
and damaged by iron gall ink erosion. Furthermore, it is moving for
Bach admirers to see
how in some passages, Bach’s handwriting reflects the effort which
this last work demanded
of him.

The facsimile, which has been lovingly reproduced and lavishly
published, documents and
records the present condition of the complete autograph score. Older
reproductions have
substituted a few individual folios where the content has become
difficult to read in recent
years. The renowned Bach scholar Christoph Wolff describes the
work’s significance in his
introduction, gives an overview of the history of composition, and
draws attention to particular
distinguishing features of the manuscript.

\"This facsimile edition is a model for the presentation of musical
sources, both in appearance
and in documentation. […] Wolffs facsimile will serve as
foundational tools\"

Once, Bach came up against the boundaries of his art, on blotchy,
260-year-old paper. ‘Et
expecto…’ is this point in the B minor mass, ‘And I look for the
resurrection of the dead.’ Bach
wrote modulations which were extraordinary. He had to strive for
these. He crossed out – although
this is a fair copy – hatched and scratched until the paper tore. He
was already an old man, his
script leans to the left. The handwriting here isn’t nearly as
lively as in the ‘Cum sancto Spirito’,
written earlier. Everywhere, one is moved by the closeness to the
manuscript which the facsimile
conveys – one of the most sumptuous ever published.

Mass in B minor Facsimile