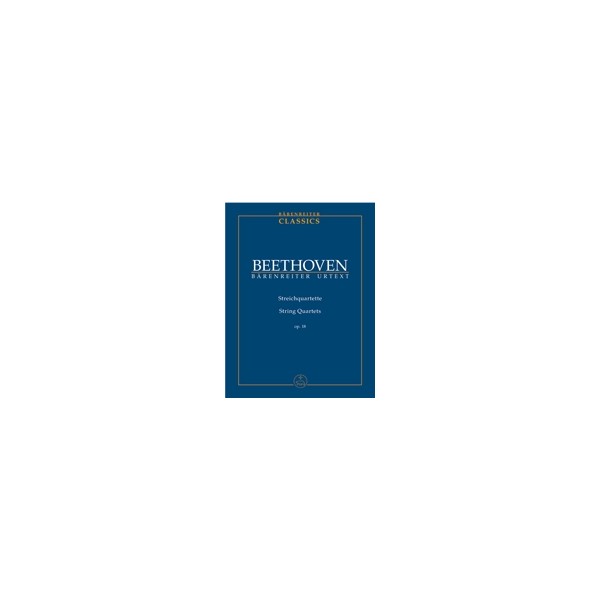 
The new Bärenreiter publication is not based on a reprint of the
first edition parts, but makes
use of a manuscript set of parts with some corrections in
Beethoven’s hand which turned up
in the 1980s.

The new edition clarifies many ambiguities in slurring and dynamics
as well as numerous
wrong notes in the inner voices. It offers performers a fully
reliable music text impeccably
laid out so as to meet the needs of performers.

The result of Del Mar’s work can be summed up with the words:
“clarity”, “transparency”,
”excellence”.

On a firmer footing: The most reliable editions are mainly found in
the Complete Editions.
But even volumes of the Complete Editions lose their up-to-dateness
as soon as important
sources emerge which the editor did not know. So it is with the
volume of Beethoven’s six
string quartets Op. 18, written between 1798 and 1800, which was
published in the
Beethoven Complete Edition in 1962.

For several decades, this was the standard edition of these
quartets. But it is based on an
inaccurate source – the original printed edition of 1801
(Beethoven’s autograph has not survived).
Only at the end of the 1980s was a copy of the parts, independent of
this source, discovered.
This permitted the many problems which were raised by the 1801 print
to be solved.

Jonathan Del Mar has now gone back to these important copies for his
critical edition of the
Op. 18, automatically giving this edition a more reliable basis than
the Complete Edition.

[...] As with his previous Beethoven editions, Del Mar provides the
user with an extensive
description and evaluation of all sources (including unimportant
ones) and a painstakingly
detailed catalogue of variant readings. [...] He conscientiously
describes in this way how he
has arrived at his editorial decisions, and even presents possible
alternative interpretations for
discussion. This gives the good feeling of having a really carefully
crafted edition in the hand.
It will probably quickly supplant the old edition.