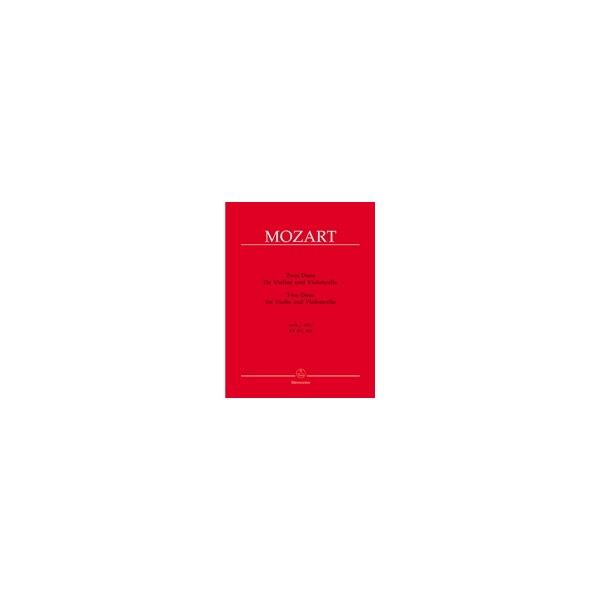 In the 25 years following Mozart’s death an enormous amount of his
music was arranged and
adapted for the insatiable appetite of the European musical public.
Nearly every major work
was arranged for piano four hand, even some of the operas were
arranged for string quartet
or other chamber scoring.

Two new Bärenreiter publications turn back the time and offer us an
insight into performance
practice of the early 19th century: music meant to be played!

The arrangements are of highly popular Mozart chamber compositions,
the Quintet for Clarinet
and String Quartet K. 581 in an anonymous arrangement from 1809 for
Clarinet (or Violin)
and Piano as well as Mozart’s two duos for Violin and Viola K.
423-424 arranged by
Johannes Traeg in 1805 for Violin and Violoncello.

The “Grande Sonate” for Clarinet (or Violin) and Piano, published by
Artaria, is an early
arrangement of a Mozart work of which no autograph exists.
The editor, Christopher Hogwood, weaves together the patchwork of
sources for the quintet,
justifying this arrangement for clarinet and piano as a serious
source for the work.

Johannes Traeg, an acquaintance of Mozart’s and a publisher, quickly
responded to the public
demand for domestic Mozart arrangements at the start of the 19th
century.

His arrangements of the Violin – Viola duos K. 423-424 for Violin
and Violoncello,
published in 1805, are a response to the need for a more active
cello part in chamber music.

Dietrich Berke, editor of the “New Mozart Edition” and editor of the
NMA volume containing
the duos, clearly shows the path from the Mozart autograph to the
arrangement and offers
us an informative preface on the duos and their place in domestic
music making at the turn
of the 19th century.

- “Grande Sonate” in versions for clarinet in A and B-flat

other products in the 'Mixed String Duos' category: