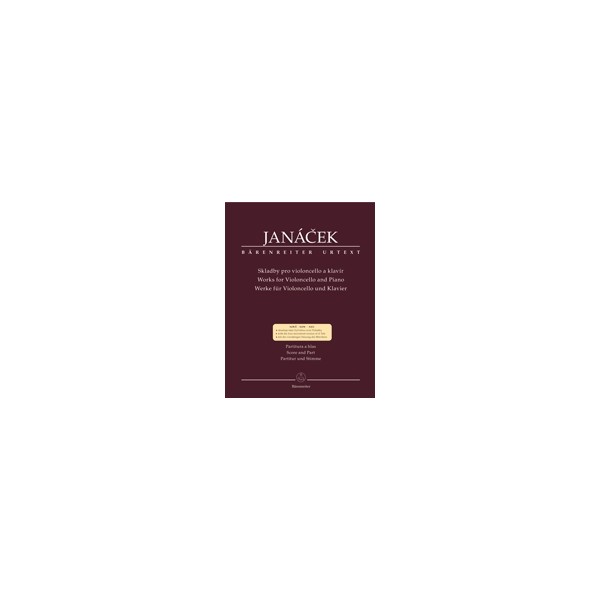 Works for Violoncello and Piano
With the four-movement version of A Tale
Instrumentation: Violoncello, Piano

* Leoš Janácek wrote only two works for cello and piano, of which only Pohádka (Fairy Tale) became established in the concert re
Leos Janacek wrote only two works for cello and piano, of which only Pohadka (Fairy Tale) became established in the concert repertoire. Although he completed the work, the composer did not want to have it published. The history of the work’s composition is long and complicated. Janacek began writing the work before 1910, however, the Pohadka (Fairy Tale) only received its final form after a series of corrections in 1923.
The second composition, the Presto, is incomplete. Only a sketch exists which Janacek did not develop further. The original tempo marking of Allegro was changed by Janacek himself to Presto. The work has been discussed under this title in recent Janacek literature.
Short text:
In the supplement of this edition an early version of A Tale is included. The source to this version is a copy owned by Antonin Vana, one of the first interpreters of the composition. The early version of A Tale offers a valuable and interesting alternative to today’s known version with its marked differences such as the considerably changed ending of the first movement and the original form of four movements.
- Urtext from the Janacek Complete Edition
- All available sources have been taken into consideration
- A detailed new foreword by Jiri Zahradka (Czech, English, German)
“Again, Bärenreiter sets the industry standard for scholarship, clarity of type, layout, and paper qualitiy.”
(Strings, July 2009)

Works for Violoncello (Cello) and Piano