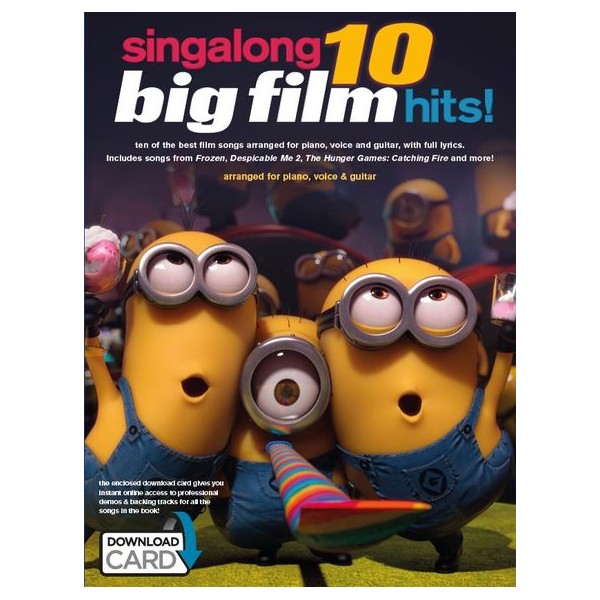 Step into the cinematic spotlight and Singalong with this book of 10 Big Film Hits , including some of the biggest contemporary film songs. The book features arrangements for Piano, Voice and Guitar in standard notation with full lyrics, while the included download card offers specially recorded backing tracks to accompany you as you take the stage. Featuring all your favourite songs from 10 of the biggest recent blockbusters, this sheet music songbook is guaranteed to satisfy any film fans desire to bring a touch of Hollywood to their repertoire. Including songs like Do You Want To Build A Snowman? from Frozen, Skyfall, Suddenly from Les Misables and the incomparably catchy Happy from Despicable Me 2, these arent just some of the best songs from films in recent years, these are some of the best songs to have been released recently full stop. Arranged for Piano, Vocal and Guitar, every song features standard notation, Guitar chord boxes and symbols, as well as full lyrics. Youll be learning all ten of these cinematic songs exactly as youve heard them on the silver screen with this fantastic collection of Big Film Hits . Not only do you get the music, but you also receive a download card that will allow you to download professionally-recorded backing tracks to your computer, so you can create the same emotional and inspirational atmosphere that these songs were written for. Everything Is Awesome, I See Fire, All Of The Stars and Atlas are just some of the songs youll be playing from this great film songbook. The Singalong 10 Big Film Hits songbook will let you sing, play and strum ten of the best tunes from the biggest cinematic experiences of the past few years. These great songs will bring a touch of Hollywood soundtrack to your practice sessions.

other products in the 'Collections (other than Disney)' category: