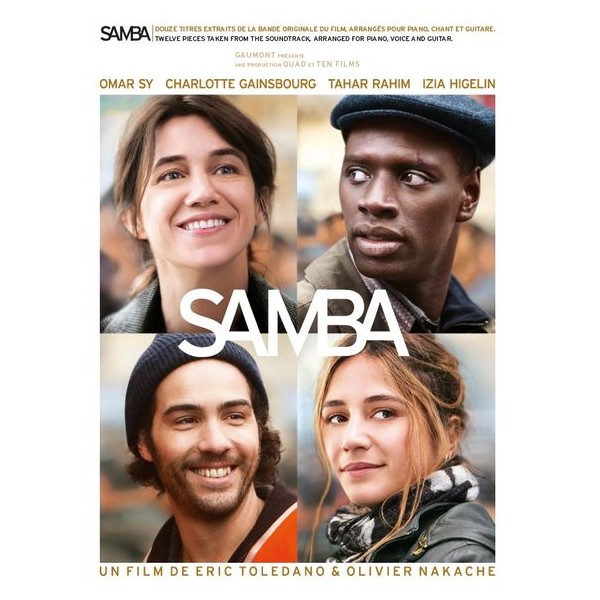 Samba is a French comedy-drama film directed by Eric Toledano and Olivier Nakache. Featuring 12 songs from the soundtrack of this critically-acclaimed film, including five pieces by Ludovico Einaudi, arranged for Piano, Voice and Guitar. Following on from the huge success of their previous film The Intouchables , this director duo have returned, once again casting Omar Sy as their lead, with a film whose soundtrack is as brilliant as the movie itself. Featuring some truly sublime songs on the soundtrack, the true star of Samba is the pieces composed by contemporary classical master Ludovico Einaudi, who previously worked on The Intouchables , and who is represented here by five songs. The sublime Time Lapse, Ascolta and Walk work brilliantly as a contrast to the pop tunes, while Experience and Run are simply stunning to hear as part of the film, but also to play yourself. Every song included in this Samba sheet music song book is arranged for Piano, Voice and Guitar, allowing you to see the film, love the music and then learn to play every piece that you heard, exactly as its played by the original musicians. All songs feature standard notation, as well as chord boxes and symbols and full lyrics, so whichever instrument you play, youll be able to learn these cinematic songs that are one of the most memorable parts of the Samba movie. With some brilliant pop tunes like Waiting In Vain by Bob Marley & The Wailers, Stomp! by The Brothers Johnson, To Know You, Is To Love You by Syreetaand even some electroswing in the guise of Catgroove by Parov Stelar, the other pieces of music fit the style and tone of the film perfectly, too. Once youve seen the film, the fantastic music will inspire you to pick up your Guitar, dust off your Piano or warm up your voice and learn to play these songs with the most accurate Samba sheet music available. Our Samba sheet music song book includes all twelve of the songs featured in the Original Soundtrack of the fantastic French film. Youll be able to learn each song as accurately as possible with these Piano, Vocal and Guitar arrangements, adding a touch of cinematic style to your practising.

other products in the 'Films & Shows by title: S' category: