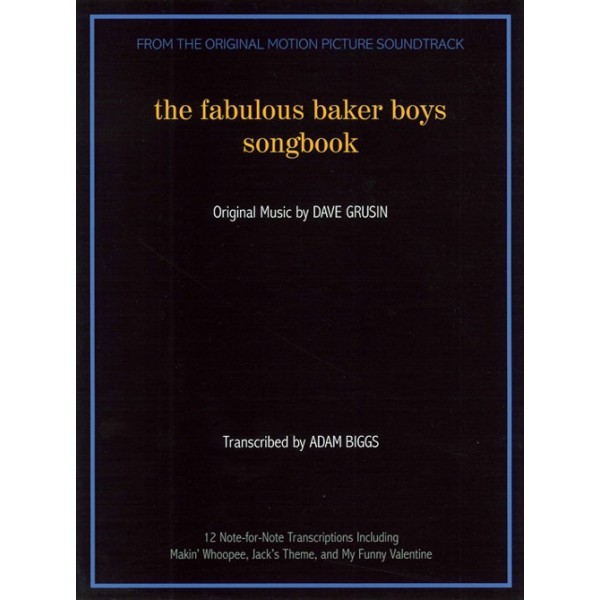 12 note-for-note transcriptions from Dave Grusin’s Grammy winning soundtrack including Makin’ Whoopee, My Funny Valentine, For All We Know and Jack’s Theme. Full Score.

Complete music score by Dave Grusin from the movie, transcribed by Adam Biggs

12 note-for-note transcriptions from the original movie soundtrack including Makin’ Whoopee, My Funny Valentine, For All We Know and Jack’s Theme. Each song is presented as a transposed score with all ensemble lines and improvised solos included. Every note of the original soundtrack has been transcribed and notated. These are:

The music for The Fabulous Baker Boys is reminiscent of the Miles Davis album “Kind of Blue” and Miles’ groups of the 1960s. The musicians on the soundtrack were Dave Grusin (piano/keyboard), Ernie Watts (saxophones), Sal Marquez (trumpet), Lee Ritenour (guitar), Brian Bromberg (bass) and Harvey Mason (drums).

The Fabulous Baker Boys movie was first released in the United States in 1989. It tells the story of the fortunes, failures and sibling rivalries of two musician brothers who performed together as a jazz duo. Its soundtrack, written by Dave Grusin, was integral to the film’s success.* It won Grammy Awards for 'Best Album, Original Background Score' and 'Best Instrumental Arrangement Accompanying Vocals'.

* Michelle Pfeiffer’s smouldering performance of Makin’ Whoopee might also have had something to do with the film’s success.

other products in the 'B' category: