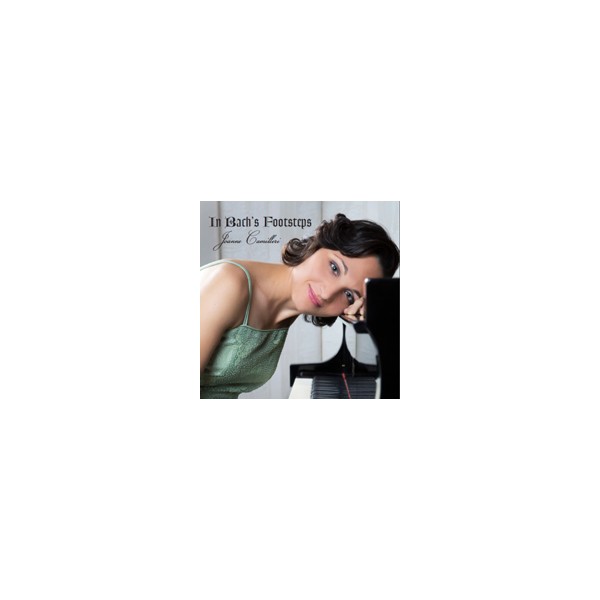 Regarded as one of the most outstanding and sought-after pianists to emerge from Malta, described by international pianist William Fong as "a musician of high intelligence and artistic vision", loved by her audiences for her passion and sensitivity, Joanne Camilleri is a rising star in the world of music.

A percentage of the sales is being donated to Inspire Foundation (Malta), which is a non-profit organisation that leads the way in providing therapeutic, education and leisure services free of charge to persons with disabilities in Malta and Gozo.

Joanne regularly performs a wide-ranging repertoire both in her native Malta and around Europe. Her performances have taken her to Tunisia, Sweden, Wales, Ireland, the Isle of Man, and around the UK, including St Martin-in-the-Fields and St James Piccadilly in London. She has been invited to perform at prestigious functions including those at the President's Palace in Malta, at the German Ambassador's Residency and the American Ambassador's Residency, as well as other concerts organised under the auspices of the Ambassadors for Ireland, UK, Tunisia and China. Commemorative events have seen her perform alongside other prominent international musicians such as British pianist Ann Rachlin at the age of 13 at the National Manoel Theatre in a Mozart Night, alongside Russian pianist Vladimir Ovchinnikov in a millennium year concert of Twentieth Century Music and alongside London Symphony Orchestra leader Carmine Lauri in a concert to celebrate Malta's Independence Day in London. As concerto soloist, she has performed concertos by Grieg, Saint-Saens and Chopin with British Orchestras and the Malta Philharmonic Orchestra. Joanne has collaborated with distinguished conductors such as Wayne Marshall, Lancelot Fuhry, Clark Rundell, Eric Hull, Philip Walsh, Karl Jenkins and Michael Laus.

An avid chamber musician, Joanne has worked with many professional partners in various ensembles, performing in the acclaimed Chamber Music International Festival (RNCM), the Malta Arts Festival, and the Victoria International Arts Festival on several occasions. Member of the Camilleri Trio, she has performed in various festivals while touring Sweden and UK as well as performed in the Spotlight Concerts Series in Sala Isouard at the Manoel Theatre, Malta. The Trio has had works written for them by a number of composers, which they premiered, including a score for a silent film by Yasujirô Ozu which was recently recorded and released on DVD by the British Film Institute.

Joanne was regarded as a highly gifted musician from a very young age. She was tutored locally by Vincent Borg and then by Ingrid Calleja in her higher grades, while complementary studies in theory and aural awareness were pursued with Prof Dion Buhagiar, Davinia Galea, Yvette Galea and Anthony Spiteri.

Joanne placed first in all the then-available Maltese competitions, one of which was the prestigious Bice Mizzi Vassallo Music Competition, which gave her the opportunity to attend the Lake District Summer Music Academy, UK. At 17, she was the youngest pianist on the advanced solo course, where she enjoyed her first taste of international music-making.

Her seasonal participation at the Lake District Summer Music Academy, made possible through the aid of scholarships, has been inspirational, giving Joanne opportunities to work with international pianists including Arnaldo Cohen, Ben Frith, Klaus Hellwig, Renna Kellaway, Leon McCawley, Thomas Sauer and Barry Snyder; and members of internationally renowned chamber ensembles, namely the Chilingirian String Quartet, the Sorrel String Quartet, the Skampa Quartet, Trio Ondine and Gould Piano Trio. During the course, Joanne performed in several Young Artists Concerts in Ambleside, Windermere, Grasmere and Hawkshead, and was also invited to give a solo recital to the LDSM Patrons.

While at the RNCM, Joanne was tutored by one of Britain's foremost pianists and tutors Carole Presland and by Russian virtuoso Alexander Melnikov. In her last year at the College, she was one of twelve students selected to take part in the prestigious Gold Medal Weekend - a showcase for the College's most outstanding students - where she performed a solo recital to high acclaim. While reading for her Doctorate Degree in Performance, Joanne was mentored by Michael Laus, resident conductor of the Malta Philharmonic Orchestra. Her final recital was a performance of J. S. Bach's Goldberg Variations which was described as a "monumental feat" performed with "superb confidence", bringing "to each variation an insight that never failed to be intriguing" [The Sunday Times of Malta].

Joanne currently combines her busy performing schedule with a love for teaching.

Joanne's dexterous playing has been described by international pianist William Fong as "…a mesmerizing display of technical bravura, at complete service of the music… This was playing of the highest calibre, a performance that entirely captured the essence of the work. Absolutely compelling music-making and pianism from a musician of high intelligence and artistic vision."

In two J. S. Bach Preludes (in B minor, drawn from BWV 855/1 and in G minor after BWV 535) transcribed by Siloti, Joanne Camilleri displayed her characteristically sensitive touch in the former and brilliance and passion in the latter.
The Sunday Times of Malta – December 2012

[Pancho Vladigerov’s Violin and Piano Sonata in D, Op.1] is difficult for both violinist and pianist, requires great skill, deep musicality, high concentration and a solid yet flexible technique indispensable in order to achieve the desired results. They [together with Malta Philharmonic Orchestra leader Marcelline Agius] did and the combination of tenderness and passion with sheer virtuoso brilliance carried all before them.
The Times of Malta – December 2012

Joanne Camilleri projected all the enchanting qualities of Charles Camilleri’s Due Canti. In between these two solos, the performers [together with violinist Jean Noel Attard] were like live-wires packed with an irresistible energy in Brahms’s Sonatensatz.
The Times of Malta – August 2012

Should there have been any doubt that this young lady is one of the leading Maltese pianists of her generation, it was dispelled with this splendid performance [of Chopin’s E minor Piano Concerto]. It is quite amazing what a lot of force and energy race through the rather diminutive performer’s frame. Yet it is a strength tempered with the utmost tenderness and sensitivity, an assuredly delicate but firm touch and a passion which never runs wild. She is endowed with a technique which remains formidable yet never one at the cost of clarity and articulation or even one indulged in for mere show, but one always at the service of the music. The rapport with the [Malta Philharmonic] orchestra was fine and the work sailed along marvellously with even the most difficult pages made to appear so easy when in fact it is far from that.
The Times of Malta – May 2011

Petite and unassuming she masters immense energy, deep musicality, an amazing technique and concentration. Once she starts performing her air of self-confidence reflects a musician who knows only too well what she is about.
The Times of Malta – January 2009

Camilleri performed her view of [The Goldberg Variations] with superb confidence. She brought to each variation an insight that never failed to be intriguing. She did not make the work shout at the audience but let its different styles emerge. The counterpoint never flagged and the music, however intricate or slow, invariably moved towards its cadence. Elsewhere she gave full rein to her dazzling virtuosity…
The Times of Malta – January 2009

The Camilleri Trio [performed] with delicacy, tenderness and a dance-like aura that fitted delightfully within this work
The Times of Malta – January 2009

From the very beginning of her performance…Ms Camilleri showed an astounding technique… There was a lot of strength and stamina in her playing as well as lyricism whenever this was called for. Articulation was clear throughout and the relationship with the orchestra and the conductor tight. [Saint-Saens Piano Concerto No.2, Malta Philharmonic Orchestra, conductor Michael Laus]
The Times of Malta – April 2008

Joanne Camilleri gave a very impressive performance of Beethoven’s 32 Variations ... Her music, technical and mnemonic aptitudes enable her to play Beethoven’ Fourth or Fifth Concerto ... would fill to capacity the Mediterranean Conference Centre Republic Hall [Malta] and would make the Maltese admirers more proud of this national phenomenon...
The Sunday Times of Malta

The elements of drama, force and sweetness; the internal psychological battle and the great tension, contrasted by heartbreaking lyrical passages were so successfully brought out in Joanne’s interpretation of Beethoven’s Pathetique Sonata that for a few seconds afterwards there was perfect silence in the hall; a silence that indicated that the audience had been transported to that world created by the composer.
It-Torca – il-Hadd Magazine

She gave a breath taking performance of Prokofiev’s Sonata No3 in A minor in which she fully satisfied the demands of the work for a variety of pianistic techniques.
The Sunday Times of Malta

The recital was characterised by her great energy and excellent memory, her confident, assertive touch and a musicality underlined by quite remarkable maturity for one her age. Her seemingly easy and effortless adaptability to change of style and idiom was most admirable. Sheer technical brilliance, whenever it occurred, did not gloss over the required attention to detail. There was a feeling that in all three works this pianist relished her interpretation, on which she lavished a lot of feeling and enthusiasm that was easily projected to the audience.
The Times - Weekender

other products in the 'Private Releases' category: