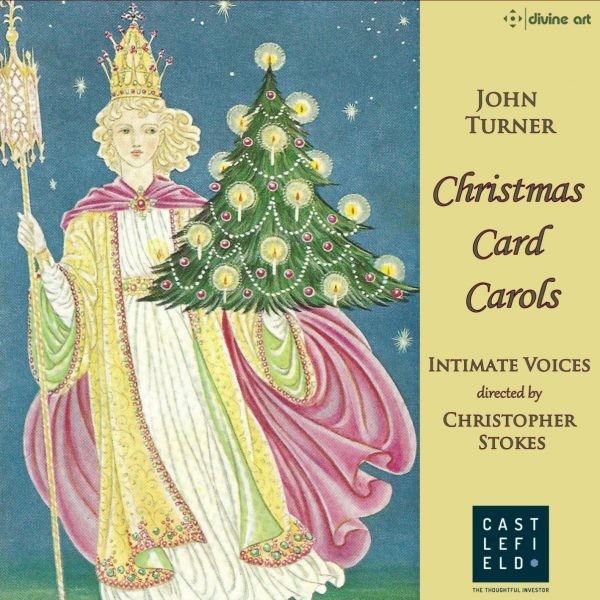 For over twenty years, Britain’s foremost recorder player, John Turner, has composed a carol and sent the score as his Christmas Card. Until now just a personal gift to his friends, John was persuaded to record a selection, which has led to this beautiful album.

These carols are also available as vocal scores in the book of the same name by Encore Publications (9790900239501).

Presented by the chamber choir Intimate Voices and featuring sopranos Sasha Johnson Manning, Eleanor Gregory and Philippa Hyde in solo and duet pieces, with obbligato harp and oboe in some, this is a lovely mixed program of Nativity carols, composed very much in traditional style, in new settings of ancient texts.

John Turner is a fine composer but is chiefly known as a recorder player and champion of contemporary composers, with dozens of recordings to his credit, many from Divine Art and Métier.

"The Manchester-based lawyer and composer John Turner has been sending musical Christmas cards to friends for years, little ditties often written without anything as lofty as public performance (or even commercial recording) in mind. The result? Neat, undemonstrative and individual little carols that absolutely surpass their 'closed circle' origins. Highlights among Turner's 'Christmas Card Carols' are the beautiful 'Invocation to Sleep' and the shapely, evocative melody of 'Rocking Hymn'. Throughout, the vocal quintet of Intimate Voices under Christopher Stokes, clearly recording on the hoof, sing with detail and reactivity."

"John Turner writes: ‘I have always liked Christmas Carols…and I have been composing them…since my early teens.’ He adds that their family Christmas card used to be designed by Manchester composer Thomas Pitfield (who was also an accomplished graphic artist), however as Pitfield became infirm this practice ceased. Turner, in his turn, decided to send ‘a specially composed carol each Christmas to [his] friends.’ And this is literally the music printed on the card, with seasonal greetings!

"Those listeners who have been privileged to receive one of John Turner’s ‘Christmas Card Carols’ will find this new CD a delightful surprise. When my card arrives, it is played through on the piano, sung (when no one is in the music room!) and then placed on the piano for the duration of the season. After the 12th Night, they are carefully placed into the music filing system. I guess that I am not alone in treasuring these delightful productions.

"It is not necessary to describe each carol, as the list above gives a good idea of the ground covered. Three general remarks may be of interest. John Turner has not been afraid to take well-known texts and write a new work. ‘Away in a Manger’, ‘Adam lay Ybounden’, and ‘I sing of a Maiden’ are a tribute to his imagination being inspired by the words and not being beholden to earlier efforts by other hands. Secondly, Turner’s musical style has captured the magic of the Season. There is an inherent simplicity in these settings that seems to counterpoint the immense importance of the theological revelation that Christmas gives to the world. On the other hand, Turner has not succumbed to sentimentality. Often making use of modal scales and never afraid to use a well-judged dissonance his style is quite varied. And finally, some of the carols call for instrumental accompaniment. For example, the oboe, played by Richard Simpson provides a haunting introduction to ‘Christmas Lullaby’. The harp, played by Anna Christensen, is used to good effect in ‘I sing of a maiden’ (2nd version) and in ‘Adam lay Ybounden’. An Arabic drum finds a place in ‘The Garden of Jesus.’ Finally, as Turner suggests, his inspiration failed him, and one year the Carol was in fact a ‘Canzonetta’ for tenor recorder and harp – with no voices. It is one of the loveliest things on this disc.

"However, my favourite number is the heart-achingly beautiful ‘Christmas Music’ (2016) which is a setting of a text by the composer’s friend and collaborator Andrew Mayes. It is a little masterpiece that well-deserves to become a Christmas Favourite.

"The redoubtable John Turner is best-known for his remarkable recorder playing, being one of the finest instrumentalists in the world. However, he has also done much to promote music from Manchester and the North Country. The liner notes well-describe his current activities: ‘his time is spent in playing, writing, reviewing, composing and generally energising.’ Add to this list, the considerable number of CDs that feature John’s playing. He is a legend in his own lifetime…

"The liner notes include brief paragraphs on all 23 carols. There are detailed notes on the performers and the composer, including several illustrations. Texts of the carols are not included. Finally, the recording was dedicated by John Turner to ‘The Memory of my late friends David Munrow and Christopher Hogwood.’

"These imaginative carols are beautifully sung (and played). The purity of the vocal line is both astounding and moving. The nature of these carols as necessarily short pieces, printed on Christmas Cards, is that simplicity of style and economy of musical resources is emphasised over complexity. This lends to the enchantment of this CD. All these carols are lovely and sum up (for me) the joy and the theological wonder of the Christmas-Tide."

other products in the 'New Releases' category: