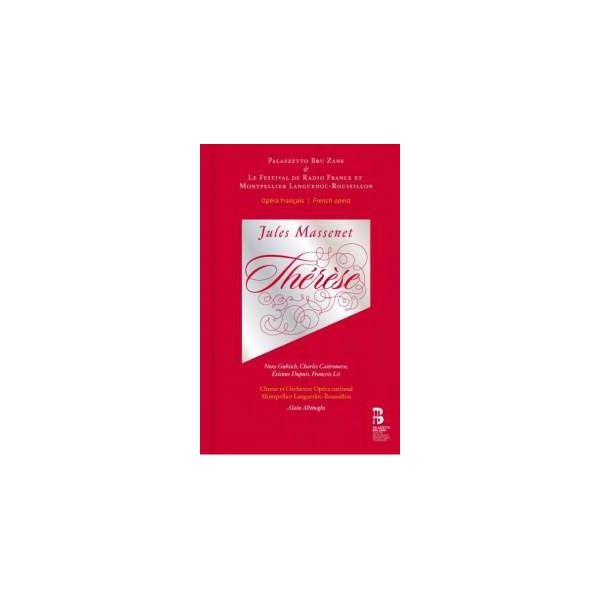 One disc and a book.

Contents of the book

Étienne Jardin Thérèse, from the Couvent des Carmes to the Opéra-Comique

Thierry Santurenne Women and the Revolution in French opera

Gabriel Fauré The première of Thérèse in Monte Carlo

The composer Jules Massenet constantly renewed his style. Towards the end of his life he turned to experimental forms of expression that are astonishing even today. Combining a marked taste for the late eighteenth century (already found in Manon and Werther) with a very modern use of naturalism, Thérèse shows both immediacy in its dramatic discourse and lyricism in its emotional expression, thus greatly deepening the strength and poignancy of the subject.

The Spanish clearly prefer their CDs packaged in book form. We've got used to having Jordi Savall's recordings on Alia Vox issued as part of glossy, heavily illustrated tomes, and now Ediciones Singulares has decided to bring its discs out in elegantly produced hardbacks the same size as a DVD box, with generous essays providing analysis and historical context alongside a full libretto and translations.

The label's specialities are neglected operas and forgotten composers; it's already released works by JC Bach, Kreutzer and Sacchini, as well as a disc devoted to cantatas by Max d'Ollone. Its first 20th-century opera is one of Massenet's lesser-known later works, in a recording taken from concert performances at last year's Massenet festival in Montpellier.

Thérèse was first performed in 1907 in Monte Carlo. The two short acts (the whole score lasts just 70 minutes) are set during the French revolution, in 1792 and 1793 respectively. Thérèse, the wife of a girondist, Thorel, falls for Armand de Clerval, an aristocrat. But when the Girondists are overthrown, Thérèse chooses to stand by her man and follow her husband to the scaffold rather than escape with the nobleman.

Potentially melodramatic, the story is tautly and concisely presented. The exchanges between Thérèse and Armand are, naturally, its emotional core, and musically, they contrast sharply with the rather brisk naturalism of the more military scenes; to me there are hints of Puccini's verismo (of La Bohème, especially) in the way in which Massenet commutes between the public and the private.

Richard Bonynge's Decca recording of Thérèse from the 1970s has remained the recommended version for nearly 40 years, but this new one under Alain Altinoglu must now run it very close. It's beautifully recorded, Nora Gubisch is a touching Thérèse and Charles Castronovo the ardent Armand. It is timely, too, for Thérèse is due to be staged at the Wexford festival in October 2013.

other products in the 'CD Books' category: