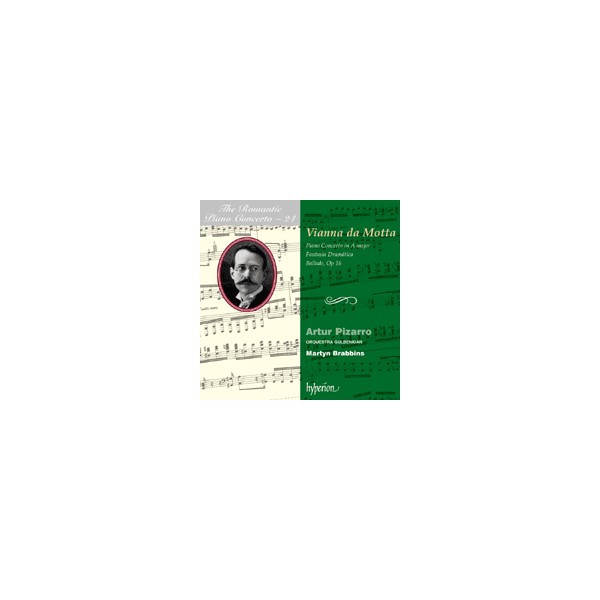 For Volume 24 of 'The Romantic Piano Concerto' Hyperion went to Portugal to celebrate one of the country's greatest musical sons. José Vianna da Motta, if he is remembered at all, is primarily known as a very fine pianist. He was one of Liszt's last pupils, became a friend of Busoni, and left a small body of very impressive 78rpm recordings. After many years based in Berlin he returned to his country of birth as director of the Lisbon conservatory and became central to the musical life of the country. And like many other performers of the day, he also composed.

Though he later went on to compose songs, chamber works, and a symphony, both his works for piano and orchestra are early works and were never published. Indeed the A major Concerto was never performed in Vianna da Motta's lifetime and the world premiere was given by the forces assembled for this CD the day before the recording sessions took place! The Concerto is unusual in being in two movements, the second of which is a set of variations which serves the purpose of both slow movement and finale. The Fantasia Dramatica was premiered by the composer in 1893; its three movements make it almost more of a concerto than the earlier work. Both works, though using the harmonic language of the time, show real individuality in their ideas. The conventional conflicts of the 19th century concerto being largely replaced by an integration of the piano with the orchestra which suits the primarily lyrical ideas (though there is much very awkward virtuosic writing which testifies to da Motta's pianistic ability).

The CD is completed with the Ballade for solo piano of 1905. The composer regarded this as his greatest piano work.

José Vianna da Motta was one of the greatest pianists of his time, as well as a conductor, a teacher of international renown, a worthy musicologist and an important composer in the history of Portuguese music. Born in São Tomé in Africa in 1868, he left for Lisbon while still a child and soon began his music studies at the National Conservatory of Music. Also in Lisbon he received piano lessons from Joaquim de Azevedo Madeira.

The titular King of Portugal, Fernando II of Saxe-Coburg-Gotha, and the Countess of Edla, interested in guiding his precocious talent, awarded the young Vianna da Motta a scholarship in 1882 to study in Berlin at the Scharwenka Conservatory. Later, while a lodger at Frau Margarethe Lemke’s, he felt that his tuition at the Conservatory was unproductive, and he decided instead to pursue his studies with Professor Karl Schäffer. He rapidly earned an enviable reputation as a pianist in Berlin, frequently performing with that city’s Philharmonic Orchestra, as well as becoming a highly sought-after pedagogue, musicologist and conductor. In the summer of 1885 he went to Weimar to attend the masterclasses of Franz Liszt, an experience he would treasure for the rest of his life. Two years later he studied with Hans von Bülow, who not only had an important musical effect on the young man but also affected him deeply in a philosophical sense. Through this contact with Bülow, Vianna da Motta became a highly regarded interpreter and scholar of Beethoven.

Vianna da Motta remained in Berlin until the outbreak of war in 1914, giving frequent concerts in Europe and the Americas, appearing with such artists as Sarasate, Ysaÿe (with whom he performed in Carnegie Hall), Casals, Amalie Joachim and Busoni. Busoni dedicated a Mozart concerto cadenza to him as well as his transcriptions of Bach chorale preludes, and Vianna da Motta gave the premiere of Busoni’s transcription of Bach’s Toccata, Adagio and Fugue in C major. Albéniz also dedicated his piano work La Vega to him. With Busoni, Vianna da Motta embarked on a new complete edition of Liszt’s works for Breitkopf & Härtel. The two artists also collaborated on projects commemorating Beethoven and in Berlin performed Liszt’s transcription of Beethoven’s Ninth Symphony for two pianos.

After the outbreak of the First World War Vianna da Motta left Germany and accepted a position of professor of the ‘Classe de Virtuosité’ at the Geneva Conservatory, a post that had been held until his death by Bernhard Stavenhagen, another pupil of Liszt. He remained in Geneva, still touring as a concert pianist, until 1917, when he returned to Portugal, where he was resident for the rest of his life. Upon his return to Lisbon, Vianna da Motta became Chief Conductor of the Lisbon Symphony Orchestra. In this capacity he gave the Portuguese premieres of works such as Brahms’s Third Symphony, Saint-Saëns’s Phaéton, Berlioz’s Roméo et Juliette and Debussy’s Prélude à l’après-midi d’un faune.

In 1919 Vianna da Motta accepted the position of Director at the National Conservatory of Music in Lisbon and immediately undertook important reforms of the curriculum, including the opposition to the culture of Italian opera, which has dominated Portuguese musical culture during the eighteenth and nineteenth centuries, and the introduction of instrumental repertoire. Alongside these endeavours, Vianna da Motta established the Lisbon Concert Society in 1917 in order to create a new ‘taste’ for music among the Portuguese public.

After his return to Portugal, Vianna da Motta’s career gradually restricted itself to his homeland as his duties took more of his time and energy. He still left a small but important recorded legacy including works of Busoni, Liszt and Chopin, as well as his own music; he also made some piano rolls for the Welte-Mignon firm. These few performances, along with an amazing recorded performance of Liszt’s Totentanz conducted by Pedro de Freitas Branco in what proved to be Vianna da Motta’s final concert appearance, give us a clear view of Vianna da Motta the pianist, the musician and the thinker.

As a composer, Vianna da Motta left a considerable output. His best-known work, the Symphony ‘To the Fatherland’ (‘À Pátria’) was composed in 1895 and first performed in Porto two years later. Each of its four movements is a musical reflection of poems by Luis de Camões. His Ballada Op 16—composed in 1905 and based on two popular Portuguese songs, ‘Tricana da Aldeia’ and an ‘Ave Maria’—is undoubtedly his most mature piano work. The first song is treated in variation form and the second serves as a peaceful coda to a dramatic and virtuosic work. This work is similar in form to Grieg’s Ballade in G minor, and it is interesting to note that in his book Meister des Klaviers Walter Niemann referred to Vianna da Motta as ‘the Portuguese Grieg’.

In the earlier works for piano and orchestra we can best observe the fusion of temperamental and cultural differences. In all his captivating artistic sensibility, Vianna da Motta never ceased to be both Latin and Portuguese. He was an introverted character, extremely sensitive and serious but not without humour and vivacity; studious and a perfectionist, he had an intellectual and creative affinity with the German cultural milieu. His importance as a composer is mainly due to his assimilation of an aesthetic and technique influenced by Liszt and Wagner, as well as by Russian nationalism. There are also perhaps occasional hints of Schumann and Mendelssohn.

In the Concerto in A major, composed between 1886 and 1887 and dedicated to his teacher Karl Schäffer, we see a very young composer preoccupied not only with the technical aspects of composition but also with creating a virtuosic vehicle for the soloist. At this early stage as a composer we can already hear the unmistakeable ‘voice’ of Vianna da Motta: there is sometimes an awkward co-existence of styles, with the folk influences of his homeland infiltrating an otherwise Teutonic composition. The piano’s role is technically demanding and unforgiving, but musically rewarding. Again Vianna da Motta’s obvious fondness for variation form is apparent in the second movement. This work was given its world premiere in Portugal on the day before this recording was made, by the same ‘cast’.

The Fantasia Dramática for piano and orchestra was dedicated to the Countess of Edla as an inspired form of thanks for all the support and attention given to Vianna da Motta during his musical development. It was composed in 1893 and first performed the same year in Lisbon at the Salão da Trindade with the composer as soloist and the Orchestra of the 24 of June conducted by Victor Hussla. As far as is known this was the work’s only performance until the same concert that saw the premiere of the A major Piano Concerto, just prior to this recording, where it was likewise performed by the same musicians as on this recording. This is a work of greater maturity and lyricism, where the composer is more comfortable with the physical requirements of the orchestra and the piano although the virtuosic demands of both are still deceptively high. There is also a better integration of the musical discourse, with an adaptation of the fluid structural forms of Liszt’s concertos. The three sections of this one-movement work are clearly definable and their interrelationships are equally transparent. This work already gives a hint of things to come, such as Vianna da Motta’s Symphony, his Invocação do poema de Luis de Camões Os Lusiadas (‘Invocation of the Lusiads’), his later works for solo piano, and his memorable collection of Lieder.

Vianna da Motta died in Lisbon in 1948. His music lives on in the spirit of Portuguese nationalism: its importance cannot be better illustrated than when his folk-dance Chlula was broadcast repeatedly on Portuguese State Television (RTP) during the Revolution of 1974, when Portugal became a Democratic Republic. It was this work that best illustrated the momentous occasion of the resurgence of Portuguese national pride.

'A marvellously recorded programme … a joy to listen to' (Gramophone)