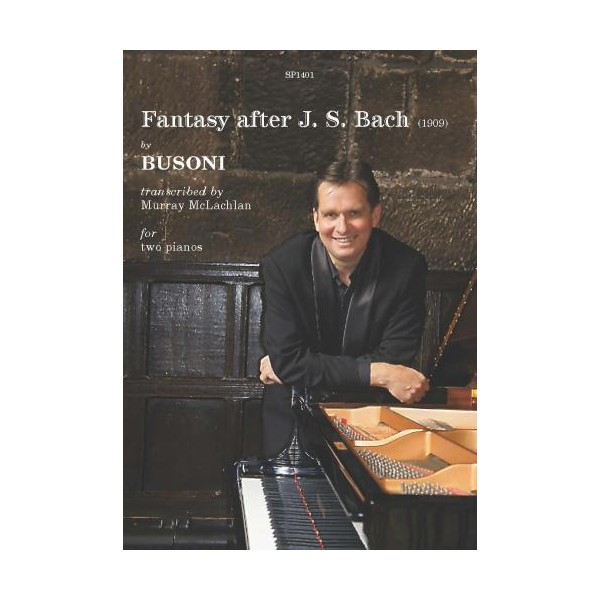 "Ferruccio Busoni's Fantasy after Bach for solo piano was written over a three day period in June 1909 as a memorial piece to his father Ferdinando following his death the previous month. As a child Ferruccio had been introduced at a very early age to the music of Bach by his clarinettist father, so it was only natural that Bach's music would be used to create a piece as a posthumous tribute to him. It is based on three of Bach's organ works- the chorale Partita on 'Christ du bist der helle tag' (BWV 766), the fughetta on 'Gottes Sohn ist Kommen', better known as the Christmas carol 'In Dulci Jubilo', (BWV708) and the Chorale Prelude 'Lob Se idem allmachtigen Gott' (BWV 602). Excerpts from these pieces are transcribed and linked with original material by Busoni.

"The 'certainty of faith' is represented in the Fantasy by the 'Gottes Sohn ist Komen' and 'Lob se idem allmachtigen Gott' chorales, which are presented in F major. 'Suffering and insecurity' are portrayed by the F Minor Chorale Partita 'Christ du bist der helle tag'. At the end of Busoni's piece, Christian faith is represented by four bars of F major, marked by the direction 'Riconciliato' and the words 'Pax EJ!'. But the final bar symbolises grief, possibly even doubt, and is presented in F minor.

"In a letter to his mother Anna, Ferruccio says that his Fantasia was 'written from the heart, and all those who have heard it were moved to tears'. Its style is directly related to the earlier Bach-Busoni organ transcriptions. It is as though Busoni has created a 'cathedral in sound' as a tribute to his father.
Though I have never performed the Fantasy personally several students have studied it with me in depth, notably Jamie Thompson and Tom Hicks. In working with them on the piece I felt that it would only be natural to recreate it as a two-piano score. There already was a Busoni two piano programme which the composer had constructed for use with Egon Petri - which they did together in George Bernard Shaw's presence at the Bechstein (now Wigmore) Hall in London in the 1920s. If a two-piano transcription of the solo Fantasy was made, it could function as an encore for this recital. When work on this project finally started in December 2016, the task, whilst not an easy one in terms of physical labour, was remarkably simple to accomplish in terms of direction, spirit and layout. The Fantasy certainly lies well when essayed for two pianos, and is arguably even more convincing in this format. I made sure that the final bars were completed on Christmas Eve, because of the fact that both Ronald Stevenson and Busoni himself frequently either started or finished important artistic projects on that date, and also because of the 'In Dulci Jubilo' Christmas connotations of the work itself."