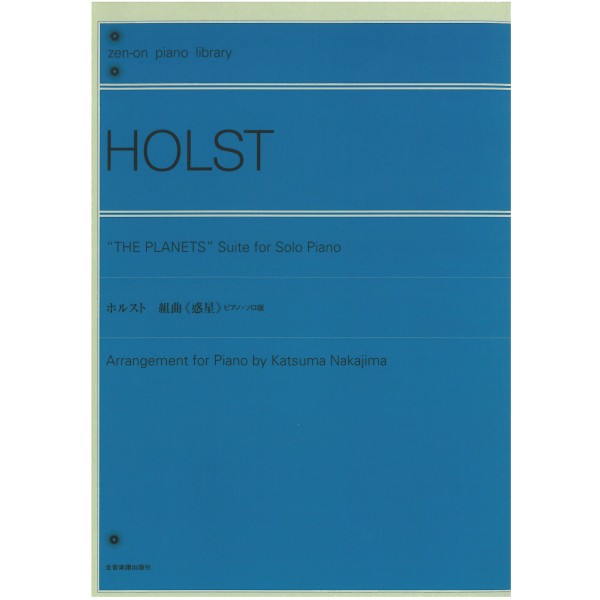 Arrangement for Piano by Katsuma Nakajima.

‘The Planets’, originally a suite for Orchestra, was composed between 1914 and 1916 by Gustav Holst. Holst was always interested in astrology and therefore was inspired to take the seven planets of the solar system to create a suite. Themes like ‘Mars, the bringer of war’ and ‘Venus, the bringer of peace’ are on the one hand proof that Gustav Holst partially also considered the mythological features of the Gods and Goddesses. On the other hand these themes show that ‘The Planets’ was created under the impression of World War I. This edition of ‘The Planets’ is an edition for Piano solo. The editor Katsuma Nakajima set a high value on feeling the orchestral power in the edition for Piano as well. The piano version is therefore similar to the original version and contains as well all seven themes.The seven themes are:‘Mars, the bringer of war’, ‘Venus, the bringer of peace’, ‘Mercury, the winged messenger’, ‘Jupiter, the bringer of jollity’, ‘Saturn, the bringer of old age’, ‘Uranus, the magician’ and ‘Neptune, the mystic’.