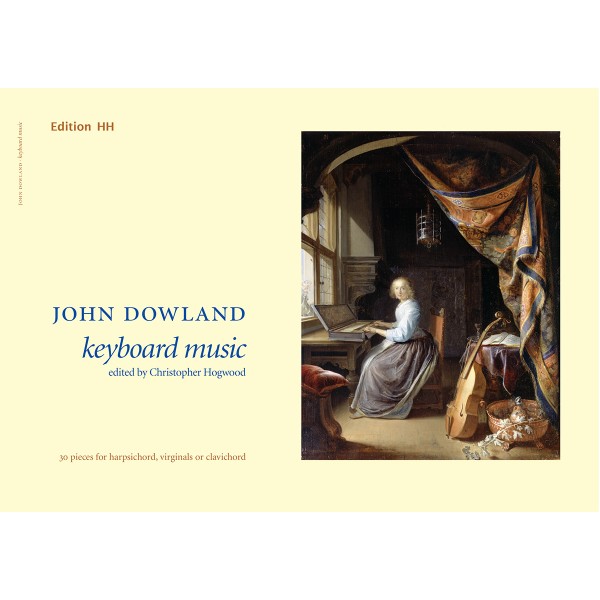 Dowland's best-loved instrumental and vocal works - notably the Lachrymae Pavan also known as 'Flow my tears' - in keyboard arrangements by Dowland's contemporaries, including such luminaries as Byrd and Sweelinck.

In Dowland's day musicians were more likely to be multi-instrumentalists than specialists in a single discipline and this is reflected in the repertoire. Dowland himself left behind multiple versions of his pieces - the famous song 'Flow my tears', for example, exists in several versions for voice(s) and lute, solo lute and viol consort - and musicians liberally adapted each other's works as occasion demanded. So even though Dowland is not known to have written any keyboard music himself, many of his pieces are found in keyboard arrangements by his contemporaries throughout Europe, including Byrd, Peerson, Scheidt, Scheidemann and Sweelinck. 30 of the finest adaptations are gathered together in this volume, many published for the first time.

"I would therefore recommend it to every keyboard-player to expand their expressive range and to every nonlutenist wanting to explore the music of Dowland, to learn about the art of variation, or to further their knowledge of this great composer." - The Consort

"This volume is an indispensable addition to our music shelves." - The British Clavichord Society Newsletter

From the back cover:

The music of John Dowland, the greatest figure of the Golden Age of English lute composers, circulated widely in keyboard adaptations during his lifetime, suitable for performance on harpsichord, virginals or clavichord. Gathered together for the first time in this collection are thirty such arrangements and intabulations made by Dowland's contemporaries in England and mainland Europe, including William Byrd, Peter Philips, Ferdinando Richardson, Samuel Scheidt, Melchior Schildt, Heinrich Scheidemann and Jan Pieterszoon Sweelinck, and a number of anonymous settings from tablatures in Lüneburg, Krakow, Stockholm, Florence, Turin, Copenhagen and elsewhere.

This important publication includes an introduction, concordances and critical notes by Christopher Hogwood, well known for his work on English baroque repertoire, both as musicologist and performer.