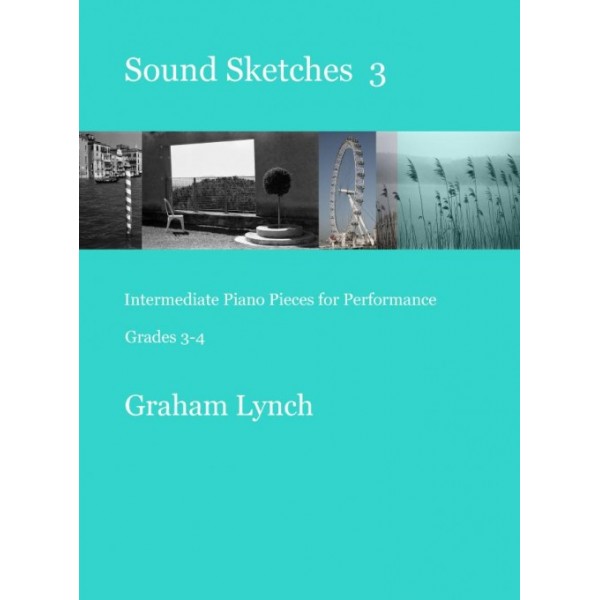 The idea behind the Sound Sketches series was to create pieces that capture images and ideas and present them musically, in a way that is very accessible and easy to grasp right from the start.

Volume 3 contains seventeen pieces that span a whole range of moods and atmospheres.

The delicate Moon Rising opens the set and it’s followed by pieces such as Kitesurfing and Marin which allow students to create some exciting sounds on the piano and to really dazzle.

There are also works of a more melancholy and lyrical character, such as Goodbye Ullapool, the beautiful Lago di Como , and the gently flowing In Green Park.

And the intense drama of Storm Scene with Mountains shows off the power of the piano to great effect.

Amongst the rest of the collection are evocations of an ancient Greek temple and an unsettling nocturnal journey on the canals of Venice, as well as rides on the London Eye and in a hot air balloon.

Each piece has its own individual character, atmosphere and sound world. And each volume gives players the opportunity to engage with the full expressive range of the piano. The music will appeal to children, but it is also ideal for adult pupils.

“I find it hard to over-praise this accessible and vibrantly conceived selection. What is special here is that Lynch succeeds triumphantly in realising his noble ambition of writing relatively easy music that has substance…”
Murray McLachlan, International Piano Magazine

Sound Sketches is an exciting and innovative series of graded piano pieces by Graham Lynch that will appeal to pianists of all ages and abilities. These pieces are varied in character, and each one opens up an imaginative world of colours and textures for players to explore.

These ‘sound images’ are evoked through strong melodic ideas which hide their technical challenges within a sense of the delight that can be had from conjuring music from the keyboard. Pieces to be enjoyed, and performed!

“Short exquisitely drawn sketches…these are lovely to play and would be enjoyed by any pupil”
Music Teacher Magazine.

Graham Lynch’s music has been performed, recorded and broadcast in over thirty countries by leading orchestras and ensembles, including the BBC Symphony Orchestra, BBC National Orchestra of Wales, Orchestra of Opera North, and the BBC Singers.

His works have been played in venues as diverse as the South Bank, Wigmore Hall, Merkin Hall New York, Palace of Monaco, and from the Freiberg Jazz Club to a cake shop in Japan, and everything in between.

‘Lynch has the gift for packing entire worlds into a few minutes, his ability to present so much wonder, colour, and philosophy…’
(International Record Review)

‘…many colourful influences combine to create an individual impression, a distinctive flavour’
(Gramophone)

“Graham Lynch has captured ideas and impressions that spark the imagination… I can’t recommend these pieces highly enough, and look forward to hearing my own pupils playing them”
Piano Professional Magazine.

Through  Sound Sketches you can be introspective, delicate, sad – but you can also dazzle, rampage, and have fun.

other products in the 'Piano Albums (mixed) Sheet Music' category: