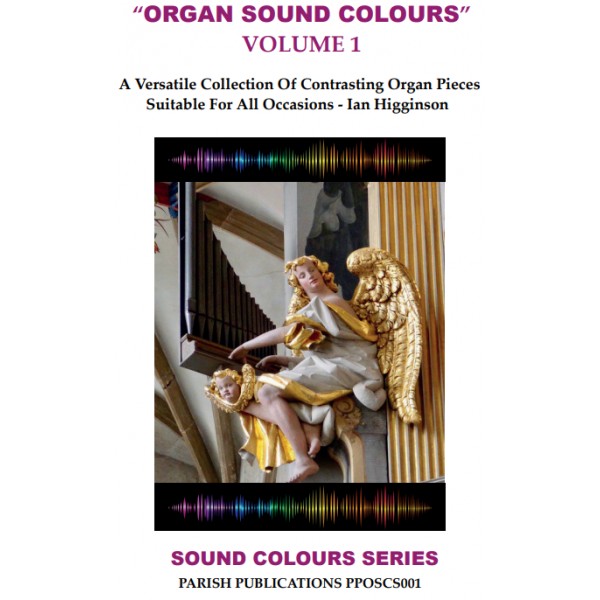 "Such is the author's natural musicianship and command of his instrument that one may defy any organist, on opening the volume, not to wish to play one or more of the pieces immediately" – The Organ, September 2020

A Versatile Collection of Contrasting Organ Pieces Suitable for all Occasions

This is the first book in the new "Sound Colour Series", which seeks to explore a great deal of tonal variety and one which illustrates a wide range of instrumental and vocal music from the pen of this prolific composer.

Please do listen to the short sound clips below that have been selected to give you a taster! They are magnificently played by Jonathan Kingston, on a Viscount Envoy 35.

Prelude on "There is a Green Hill Far Away"

Postlude on "Thine Be The Glory"

"The young organist, having successfully accomplished Rinck's first three months (a not inconsiderable achievement in itself) may well wish to explore this eminently practical and highly attractive set of twelve original pieces by Ian Higginson – 'all occasions' are certainly covered in this fascinating and original set of short studies. Such is the author's natural musicianship and command of his instrument that one may defy any organist, on opening the volume, not to wish to play one or more of the pieces immediately – such are their inherent individual qualities.

"The presentation is excellent and this practical publication is strongly recommended – one or more could well form short recital 'encores'.

"Although some very well-known melodies are used for the basis of individual pieces in this collection, I found the most fascinating and compelling piece  to be Higginson's original 'Improvisation' – but it requires a finished technique from the performer."

– Robert Matthew-Walker, in The Organ, September 2020

"There is much that is attractive - catchy even - in this unashamedly tonal music. That Ian Higginson is an organist is obvious since these pieces fit well under the hands and feet, but (caveat emptor!) the standard is largely around Grade 7+.

"'Trumpet Tune' sets the standard in terms of craftsmanship and appeal. Though in G major rather than the usual D, it is typical of its genre. The central section is in Eb which, while hardly revolutionary, comes as a (not unpleasant) surprise. Many of the pieces are suitable as final voluntaries: 'Postlude on "40 Days & 40 Nights"', 'Processional', 'Postlude on "Jesus Christ is Risen Today"', 'Improvisation', and 'Postlude on "Thine be the Glory"'. They are characterised by vigorous rhythms, effective contrasts and a colourful harmonic vocabulary with an abundance of diatonic dissonances (7ths, 9ths) and occasional false relations. Each final chord includes a 6th or 9th in the manuals and a quint in the pedals. I suspect Dr Higginson's compositional process may involve improvisation and therefore the title of the 'Improvisation' seems ironic given the un-improvisatory nature of this rather grand march. The quieter pieces ('Prelude on "There is a Green Hill"', 'Prelude on "Drop, drop slow tears"') are easier than the louder numbers and could prove useful before a service. The two remaining compositions, 'Dance on B.A.C.H.' and 'Scherzo', are perhaps better suited to concert use. They are tricky little devils!

"I am glad to have made the acquaintance of this music and look forward to seeing what future volumes contain."

"The first volume of Organ Sound Colours contains a total of 12 new organ pieces by the composer Ian Higginson. The album itself is dedicated to Trevor Tipple, a recently retired organ builder, church organist and choirmaster in the Midlands. It contains works of varying difficulty and in different styles (contemplative chorales, trumpet tune, scherzo, sortie, etc.). There is plenty to explore here, with work suitable for church services and the concert platform. The edition itself has been well laid out, with an attractive cover. The price may seem a little steep at £20, but this is a collection that is worth investigating further."

This publication is also featured in:

other products in the 'Parish Publications' category: