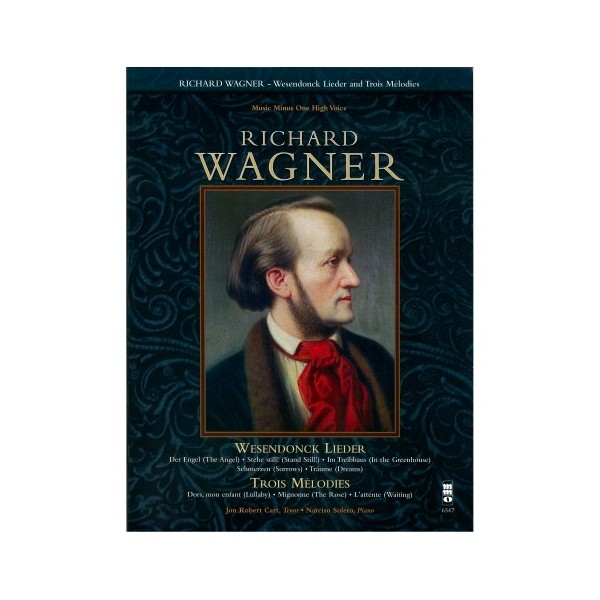 Listen to brilliant tenor Jon Robert Cart perform these lieder. Then he steps aside and you take center stage with your virtuoso accompanist, Narciso Solero, at the piano.

In 1857 and 1858, as Richard Wagner had come to the completion of Die Walkure, the second installment in his epic opera cycle, Der Ring des Nibelungen, he took time out to write a series of lieder for (and based on poems by) Mathilde Wesendonck, with whom Wagner was believed to have been, at the very least, extremely infatuated. Whatever the truth might have been behind their relationship, it is known that Wagner had met Mathilde's husband, Otto, in Zurich, and his ensuing friendship with the couple led to this beautiful set of lieder.
Wagner himself called two of the set's songs (Im Treibhaus and Traume) "studies" for his magnificent opera Tristan and Isolde, and though originally intended for female voice with piano, all of these songs were eventually orchestrated, either by Wagner (in the case of Traume) or by other composers. When they were first performed in 1862, they were titled Five Songs for a Female Voice. In the 20th century they also became very popular songs for some of the greatest tenors.
Much earlier, in 1839, Wagner had composed a three-song cycle called Trois Melodies. The first piece, entitled Dors, mon enfant, was a lullaby that Wagner ascribed to an unnamed young poet of his publisher's acquaintance, and of which he wrote that his wife had called "heavenly for sending one to sleep". He then set Ronsard's song Mignonne and Victor Hugo's L'attente (from that author's Orientales) to round out the set. Wagner offered L'attente to the reigning diva of the time, Pauline Viardot, who is said to have flatly refused it. Wagner wrote in his memoirs My Life "I have no reason to be ashamed of these small pieces".
Listen to brilliant tenor Jon Robert Cart perform these lieder. Then he steps aside and you take center stage with your virtuoso accompanist, Narciso Solero, at the piano.

other products in the 'General Voice' category: