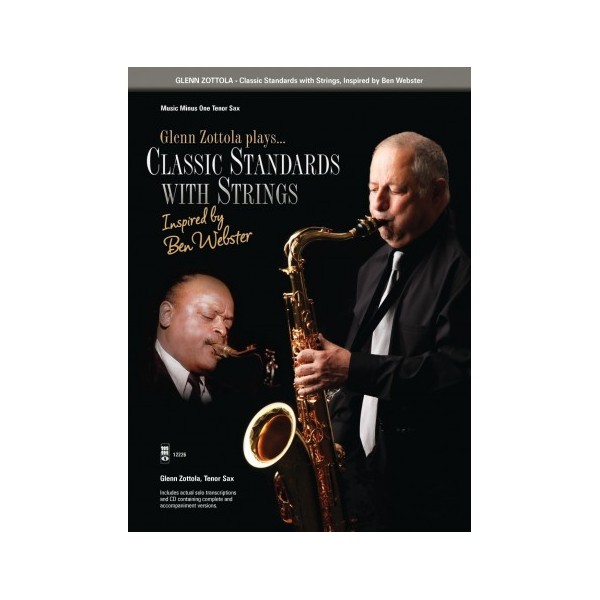 This is a very romantic new saxophone play-a-long album from Music Minus One, in which Glenn Zottola captures the essence of the great Ben Webster.

Ben Webster always had a split musical personality. On uptempo tunes, the great tenor-saxophonist could sound quite intense, with growls, honks, roars and screams being a natural part of his vocabulary. Yet on ballads, he could purr romantically like a pussycat, playing with great tenderness and sensuality while making every sound count.

In both cases, Ben Webster’s playing was more about the sound than about the notes. Coleman Hawkins, his idol and main influence early on, could run rings around Webster harmonically, since Hawkins knew every chord backwards and forwards. Hawkins could make dozens of notes fit while Webster could get his message across with one perfectly placed sound. He had a unique sound and style, one that was at its prime for more than 30 years.

Glenn Zottola was best known in his earlier years as a hot trumpeter whose classic style ranged from Louis Armstrong to Clifford Brown. He also occasionally played alto in those days but in more recent times has often recorded on tenor. The versatile Zottola has been featured on a series of stimulating projects for Music Minus One including tributes to Clifford Brown (on trumpet), Charlie Parker (on alto) and Stan Getz's bossa nova period (on tenor).

"This series lets me pay tribute to some of the great legends who influenced who I am," says Glenn Zottola, "and it also allows me to pass down to others what was passed down to me. A little while ago, I received a Dexter Gordon mouthpiece from the instrument company RS Berkeley. I had never played a metal mouthpiece before. It is so small it is almost like playing an alto mouthpiece. I decided to do some research into other tenor-saxophonists who had played metal mouthpieces, ranging from Sonny Rollins, early John Coltrane, Dexter and Don Byas, all the way back to Coleman Hawkins. When I reached Ben Webster, it brought back memories of listening to his recordings with Duke Ellington, and I was inspired to record these ballads with his flavor."

On Ben Webster Revisited, Zottola makes no attempt to imitate Webster but performs a set of ballads utilizing the great tenor's relaxed and romantic approach along with hints of his airy breathy sound. Rather than playing double-time phrases, he lets the music breathe, putting plenty of feeling into each note. Among the highlights are such songs as "Can't Help Lovin' That Man" (from Jerome Kern's Showboat), "Stardust", "Blue Moon" and "Laura." A special treat is hearing the beautiful "Portrait of Jennie", a song that has hardly been played in jazz since Clifford Brown.Track List (click to hear samples)

other products in the 'Tenor Sax' category: