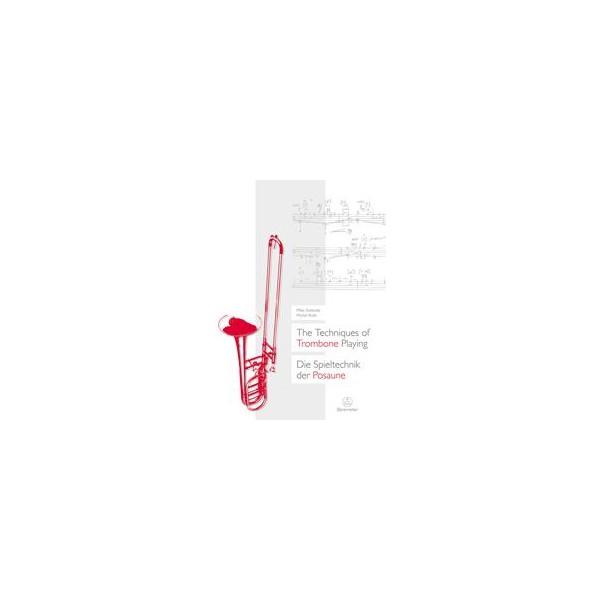 Roth/Svoboda - The Techniques of Trombone Playing

A book conceived as a valuable guide for composers and trombonists.

It familiarises composers with contemporary trombone techniques and shows how to put them to creative use.  Furthermore it helps trombonists to view and employ their versatile instrument as a multi-functional sound generator.

Together with composer Michel Roth, Mike Svoboda explores what might today be called “the unlimited expansion of new performance possibilities”: micro-intervals, multiphonics and the combination of the trombone sound with the human voice – all accurately described and illustrated with many annotated music examples.

• Includes many tables and music examples on the basics and expanded techniques of trombone playing
• Practical information on mutes, repertoire, etc.
• With 92 sound files and 5 newly composed études which can be downloaded from the Bärenreiter website

The authors
Since September 2007 Mike Svoboda has been professor of trombone and contemporary chamber music at the Basel Academy of Music (Switzerland).  Of formative importance to his artistic development was his nearly 11-year collaboration with Karlheinz Stockhausen in the 1980s and 1990s.  His exchanges with Stockhausen and other composers, such as Peter Eötvös, Beat Furrer, Helmut Lachenmann, Wolfgang Rihm and Frank Zappa, allowed him to premiere more than 400 works over the last 30 years.

Michel Roth is professor of composition and music theory at the Basel Academy of Music and a member of their research department.  As a composer, he has been a regular guest at various international music festivals and more recently particularly in the area of music theatre.  Numerous radio and CD productions document his compositional output for which he has also been awarded the composition prize by Music Viva, Munich.  In addition Roth also researches and publishes on subjects concerned with music and art theory.