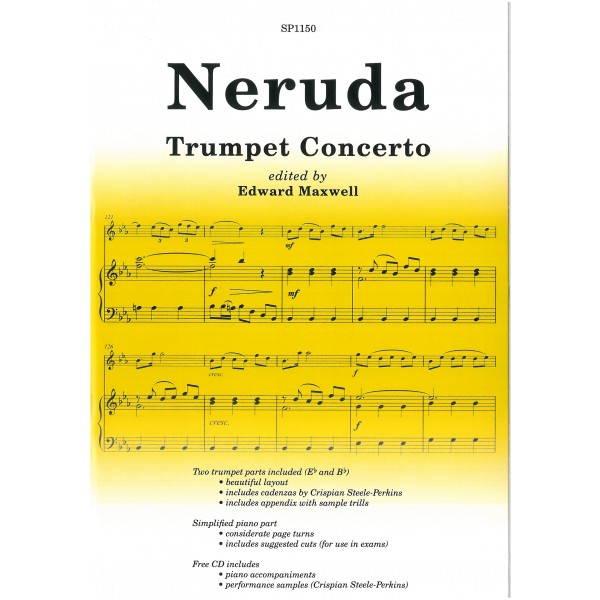 This edition is more user-friendly than the others currently available. The accompanying CD provides piano accompaniments as well as samples from recordings of the Neruda, Haydn and Hummell concerti with kind permission of Hyperion Records and Crispian Steele-Perkins.

J.G.B. Neruda (1711-1780) was typical of 18th century musicians, travelling and studying in various parts of Eastern Europe and finally settling in Dresden (1750-1780) in the Electoral (chapel) orchestra, where he was salaried as a violinist and occasional composer. This concerto was originally composed for a Corno da Caccia (hunting horn), presumed to be something of a hybrid between the natural horn and natural trumpet, but has been borrowed by modern trumpet players and is now firmly fixed in the Classical trumpet repertoire.

This edition is intended to be more user-friendly than the others currently available: there is a much easier (and dare I say, more stylistic) piano accompaniment - any doubling of the solo part has been removed, voicing simplified and my premise has been to imagine what it might have been before it was orchestrated, rather than trying to cram in every last piece of orchestral detail.

Suggested cuts have been indicated which give a short introduction to each movement, perfect for auditions, recitals or exams. However, the bar numbers still tally with the longer original versions, which are included should they be required.

The dynamics and articulation which I have added incorporate the weight of opinion in current editions and recordings, offering more guidance than 'scholarly' editions, without being over-prescriptive. There is an appendix with suggested interpretation of trills. Listening to as many different recordings as possible is the best way to assimilate good trills.

The accompanying CD provides piano accompaniments and observes the suggested cuts. See page 23 for full track listing. There is free software available online (eg. speedshifter on the ABRSM website) which enables you to change the speed of a CD should you wish to practise slower, or indeed faster.

The Neruda Concerto is often considered to be a sibling of the Haydn and Hummel Concertos, which are also available in this series published by Spartan Press. Samples of all three concertos are included on the CD with kind permission of Hyperion Records and Crispian Steele-Perkins. I hope you will be inspired to buy the complete recordings and listen to live performances. Many thanks to Crispian Steele-Perkins for his assistance in the preparation of this addition.