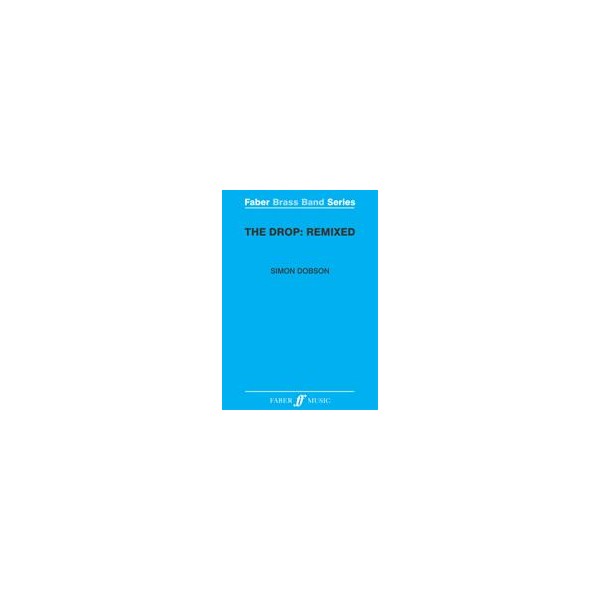 The DAvailable was originally commissioned as the set test piece for Section B of the 2007 European Brass Band Championships. The composer has since reworked some of the original material and extended the piece, thus renaming it The Drop: Remixed.The Drop: Remixed takes its inspiration from many forms of music, but primarily from Drum ‘n’ Bass – although it does not directly quote or sound like this medium itself. Dobson was introduced to this medium through friends who were DJs, and discovered that this art form is complex, passionate (in its more underground or none-mainstream forms) and intricately composed as any other form of music.The work starts with the turning on of a turntable as can be heard in the ‘warping’ of the trombone part near its start. The composer has tried to avoid a more regular form in favour of a mix of styles, in the same way that a DJ would mix together records of different styles to create the sound and atmosphere they were looking for and also tried to reproduce some of the techniques used by a turntable specialist such as to fade one style, pulse or pitch into the next as opposed to switching directly between them. Dobson also uses a DJ technique wherein a DJ will abruptly dAvailable in a record of an unrelated style in order to grab their audience’s attention. This piece requires the playing of many styles (from a lullaby to ‘Elfman-esque’ dance motifs) and a great amount of technique to be blended together to form a whole, and although it obviously must be linear, the whole is as important is its components.The works’ title, The DAvailable, refers to a technique used by DJs to help achieve an emotional climax within a ‘mix’. A dAvailable is when a DJ would filter out either or all of the beats’ high, medium or low lines to create tension, building an audience up, and then ‘dAvailable’ all the parts back in again to reach the climax of a set. The composer has not attempted, at any point, to write drum ‘n’ bass for brass band, but merely to pay homage to an art form that he feels is misunderstood and can be as beautiful and tumultuous as any form he has encountered.

Drop, The: Remixed (score and parts)

other products in the 'Brass & Woodwind' category: