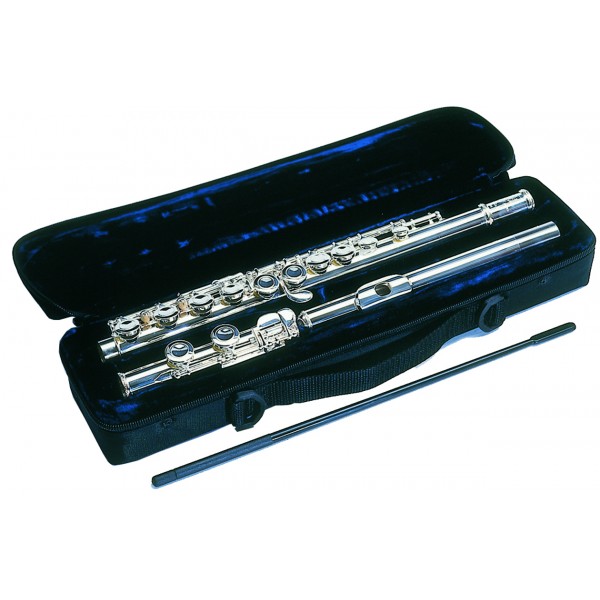 The 10XE has been a best seller for us for over 20 years and we have nothing but the highest of praise for them. Trevor James have a knack of finding the sweetspot between not too expensive to be out of the comfort zone of beginners choosing a first instrument but not cutting corners that result in an instrument that's hard to play and frustrating to maintain. The 10XE is a great instrument designed to take a student through to Grade 5 standard and, with a five year warranty to back up the quality you're paying for, you won't find issues with metals fatiguing and requiring constant tweaks to regulation.

The 10XE is a great starting point for children and adults alike!

A good article from Barnes & Mullins, the distributor for Trevor James:

Why is the Trevor James 10x the Best Student Flute?

The Trevor James 10X flute has been top of the student flute rankings for a good few years now, and here at Barnes & Mullins we’re delighted that’s the case. However, it got us thinking about exactly why the TJ10x beginner’s flute continues to be such a success.

Whether you’re an absolute beginner or a player returning to the flute after time away, there are 4 basic things you need.

So with those 4 requirements agreed, let’s discover the secrets of the 10x one by one:

You may think you want to spend the least amount of money possible at the beginning, but in your heart, you probably know this is not the best plan.

With musical instruments, you really do get what you pay for. It’s simple for a factory to copy the basic design of something and churn them out by the thousand and sell them direct on some online marketplace. But generally, the people who run these factories are neither flute players nor experts. They’re probably not even interested in flutes. The flute is a commodity.

So, just because something looks like a flute and smells like a flute, doesn’t make it a playable flute.
The tiniest variation in musical instruments makes a huge difference. That’s why musicians obsess over the exact gauge of strings used on their guitars, or the extra 0.1mm of silver used on the mouthpiece of their saxophone. Details matter.

So, the TJ10x is priced around £400-£450 (depending on the exact model), which you could equate with the cost of a reasonable bike, or a gym membership. Both those comparisons are justifiable expenses because they both serve a purpose and demonstrate a desire for a specific outcome. In the case of the bike, if your bike is shoddy, it will be unpleasant to ride and will likely develop problems early on. And that will interfere with your goal, which is not only to get from A to B reliably, but more importantly to get and/or stay fit and healthy.

As you have already decided that you or your child would like to enjoy learning and playing the flute (at a cost no doubt), spending a reasonable amount on the very thing the whole project relies upon is undoubtedly worthwhile.

This is where things start to get really fun.

You’re holding your shiny new flute in your hands, tutor at the ready, preparing to blow your first note. Then you blow, and only then it dawns on you: This is really quite tricky!

Naturally, there is an initial learning curve to anything new, and the flautist’s technique is not the simplest.

But the good news however, is that the 10x has a specially designed lip plate and riser (the part that you blow across) which is slightly raised towards the centre. This is an exclusive Trevor James design, and was developed to aid students of all ages.

For an early player, getting a decent note out of a flute is tricky - especially some of the lower notes – but the shaped lip plate and riser makes it so much easier by allowing a little more air into the tubes whilst still requiring correct technique.

So you learn the right technique, but get an improved result. And that is indeed, a great result for everyone.

Another thing that aids playability is the ease with which the keys can be depressed, the force that’s required to keep them there, and the effectiveness of the pads attached to the underside of the key cups.

Unlike other student flutes, the TJ10x uses Italian-made ‘Pisoni’ pads. These pads are most commonly found on high-end flutes, and most certainly not on student flutes. But what’s the big deal?

Pads are embedded into the underside of each of the flute’s keys, and it is the pad that seals the hole when the keys are depressed. If inferior or ill-fitting pads are used, then the holes don’t seal correctly, and if the holes don’t seal properly, then notes won’t sound properly, and your hard work will once again be in vain.

On top of this, these professional quality pads will last an awful lot longer than most. So you can spend more time playing and practising and less time in the repair shop.

Now you’ve spent a reasonable amount on your new flute, you want to be sure it’s going to last. Plus, you may also want to know that when you come to ‘step-up’ to a higher-end model, your 10x will still be in good enough condition to trade-in for a reasonable sum.

So, let’s first look at quality of materials.

We know the pads are of a higher quality than other student flutes, and not only does that enhance the playability, it also ensures longevity too.

But if we move to the actual body of the flute, we’ll find another few pleasant surprises.

Trevor James 10x flutes use Japanese tubing. In its simplest form, this is much more expensive than the (usually) Chinese tubing found on other student flutes. The most revered and most expensive flutes in the world are traditionally Japanese, and these companies use a specific type of resonant tubing which demands a premium price.

The consistency and material structure of this tubing is superior, and most importantly, closely regulated due to the demands of the high-end clientele.

The result? A quality and consistency of tone, and a trueness of build quality.

Why do TJ Flutes use this material on even their student instrument? Because it gives a better result than the cheap stuff. Therefore, you’ll play it more, enjoy it more, play flute for longer, and hopefully buy a TJ ‘step-up’ flute in the future.

The next thing is the silver-plating.
It won’t take you long to find a player or teacher who has a story or two about some dodgy plating that started to flake or tarnish on a cheap flute. The fact is that silver-plate doesn’t adhere particularly well to cheap tubing.

So, when Trevor James set about designing the 10x they had to find a sure-fire way to ensure the plating was rock solid.

After much research and experimentation, the engineers found that copper-plating the unique Japanese tubing first created the most stable base for silver-plating afterward. So, each 10x student flute is plated in copper first, and then has two (yes two!) layers of silver-plate. This is not only the most effective way of making a faultless plated finish, but it also ensures it stays that way long into the future.

So if that solves the problem, why doesn’t everyone do that to their student flutes?
The truth is, it adds cost. But in the scheme of things, the small additional costs are offset by the lack of hassle further down the line, but not everyone looks that far ahead.

Can you be certain that when you get your Trevor James flute, it will be ready to play?

Firstly, unlike 95% of all the other beginner flutes, TJ instruments are not made by a couple of large factories and then re-badged with a one brand or another. Trevor James 10x flutes are made exclusively Taiwanese workshop with a limited capacity. So as the quantity is finite, the quality needs to be exceptional.

What about when the flutes get to the UK?

Trevor James are a British company and have a dedicated team of technicians located at their base in sunny Kent, south-east England. These highly trained technicians religiously test, tweak and setup every single TJ instrument before it finds a new owner anywhere across the world.

In fact, TJ take the whole thing extremely personally, as the 10x flute is the only student instrument with a setup audit trail. So, you can know exactly which of the technicians setup your particular instrument, and when.

Hopefully you now have a good understanding of why the TJ10x flute is top of the list when it comes to student flutes. You know that spending the least possible is not the best idea, but you also know what benefits are available with a very affordable outlay.

If you would like to read what other owners of 10x flutes have to say, just have a google and you’ll find numerous positive reports from players and teachers alike.

Our favourite report however is this one from Clare Southworth. Clare is Professor of Flute at London’s Royal Academy of Music, so she knows a thing or two about the subject…

"What a fantastic flute! I recommend the TJ 10x flute as the best 'first' flute above all others"