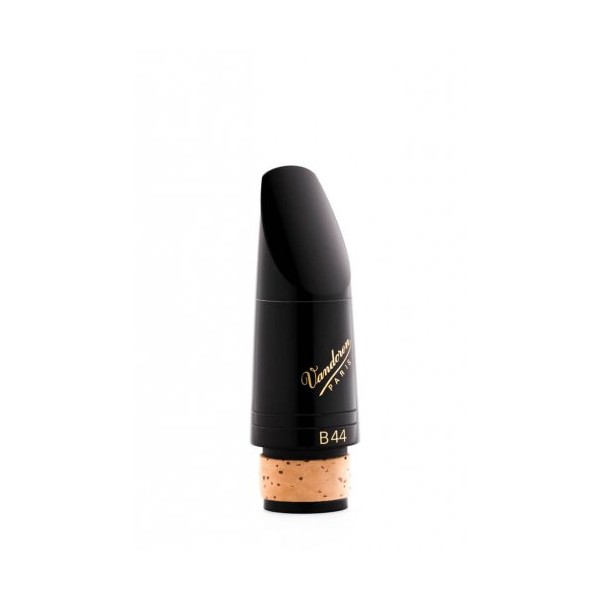 Vandoren - the mouthpiece is the motor of an instrument, which gives it its overall timbre and pitch. The quality of the mouthpiece is vital for it allows artistes to display the full range of their expressiveness.

The difference between ”Profile 88” and Traditional mouthpieces is in the exterior angle of the beak. Therefore, the musician is free to choose the model which suits his purpose in terms of best playing position, easiest sound projection, greatest playing comfort, and the most controllable and precise articulation.

Vandoren has developed the “13 series” mouthpiece specifically for American clarinetists using A440 pitch. Four models have been originally developed with specific facings to this series: the M13, M13 Lyre, M15 and M30 mouthpieces. The “13 series” range also encompasses other models (traditional facings):  5RV, 5RV Lyre, B45, B40, B40 Lyre and M30 Lyre.

B40: Same facing as the B45 with a wider tip rail, it produces a compact and centered sound.

B45: The universal mouthpiece. With an intermediate tip opening and a medium-long facing, it is appreciated by most clarinetists.

B45 Lyre: Characterized by a particularly large tip opening, it offers a flexible, round sound and remains easy blowing.

B46: The mouthpiece best suited to musicians playing both clarinet and saxophone.

M30: Its facing length gives it great flexibility, a good balance between timbre and roundness.

5RV: The time-proven standard for professional musicians. Quality and tradition.

5RV Lyre: More open than the 5RV with a longer facing.

Series 13 5RV: The time-proven standard for professional musicians. Quality and tradition. A440 pitch.

11.6: Same sound qualities as the B45 with a smaller tip opening.

B44: The time-proven standard for musicians.

other products in the 'Instrument Mouthpieces' category: