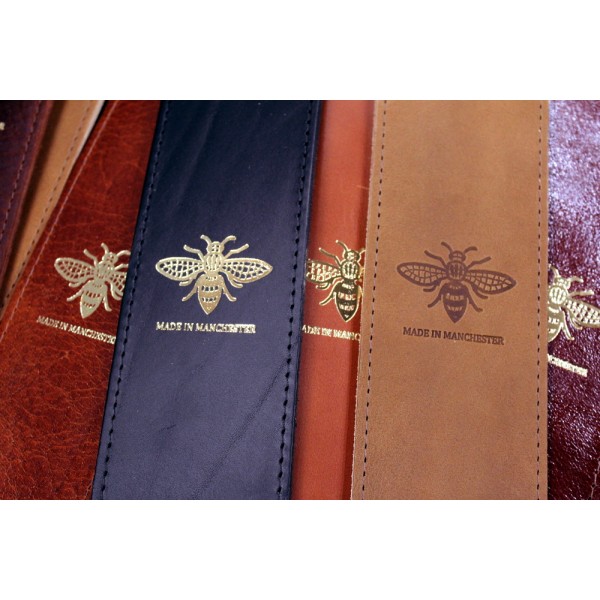 Based on a bee drawing by our very own instrument department manager and made for us by our friends at Stones Music a few miles down the road from the shop in Glossop, the Manchester Bee strap is the perfect way to show your appreciation of this fine city!

Available in a selection of colours, the Forsyth straps are 2.5" wide premium British leather sourced locally and manufactured in Glossop. Due to the small scale nature of the workshop making them the actual colours can vary slightly so we'll attempt to match as closely as we can the colours shown on the website, however if the exact colour is important to you and you want to select one from stock please drop us a line with your order and we'll be happy to photograph a few examples you can choose from.

Forsyths have in recent years been concerned by the increasing number of people resorting to living on the streets of Manchester and we have contributed to a number of charities to help support homeless people in the area, including equipping a ukulele orchestra at the Booth St day centre! We will be donating £5 from the sale of every strap this year to Musicians Against Homelessness

Musicians Against Homelessness (MAH) launch their 2017 campaign to raise money for the homeless charity Crisis in England, Scotland and Wales and Simon Community in Northern Ireland.

Rock and pop stars including Shaun Ryder and Cast are backing the cause which looks set to have an even bigger impact this year.

Former Oasis guru Alan McGee launched the campaign in 2016. It was publicly supported by celebrities such as Lilly Allen, Liam Gallagher and Irvine Welsh. Over 500 bands played over one hundred MAH benefit gigs around the UK.

But McGee expects even more bands and household names to get behind this year’s drive which coincides with the 50th anniversary of Crisis. He said: “Last year the response was incredible but more people know about us now.
We are getting people talking and taking action on homelessness in the best way we know how, through music and community. This problem will not go away. Statistics show a significant rise in the people sleeping rough on British streets – 4134 in January in England alone – which is an absolute disgrace.”

This year, the campaign is expanding by teaming up with Simon Community Northern Ireland.

Chief executive Jim Dennison said: “We are thrilled to be working with Musicians Against Homelessness to raise awareness of homelessness in Northern Ireland.

Jon Sparkes, Chief Executive of Crisis, said: “I’m delighted that Musicians Against Homelessness will be supporting Crisis again this year with what promises to be an even bigger and better programme of gigs and events in the Autumn. Homelessness remains an unsolved problem across the UK, so your help and support in what will be our 50th year, is much needed, and greatly appreciated.”

other products in the 'Guitar Straps' category: