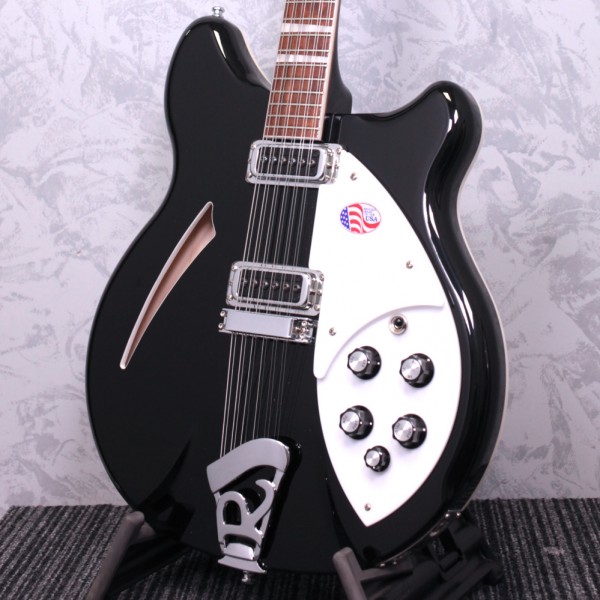 What can we say about 12 string Rickenbackers? It's rare that you can point to a guitar design and say there's nothing sounds quite like it but if you had to pick something a Ric 12 string must surely be top of the list.

The 360 with its sexy top curves has been around since - well, since just before Roger McGuinn heard A Hard Day's Night and went out and bought one to use for Mr Tambourine Man, so there's two iconic uses of Ric 12 strings right there. The current standard model has a few updates on the 60s version: the construction is far chunkier, Rickenbacker presumably having been unpleasantly surprised by how easily Pete Townsend was able to smash up the originals, it has a full 24 frets for those mandolin style flourishes up at the top end, and the pickups are Hi Gains rather than the 60s style toasters. A lot of people moan about hi gains but we say give them a chance - they don't do the 60s retro thing as well as toasters but as an indie rock sound the hi gains are just great.

The neck is thin, and you've no doubt heard people on forums moaning about how thin they are, but that's part of the Rickenbacker package: they're not guitars that make a ton of concessions to the player, they do what they do, they know darn well what they do is brilliant, and you need to figure them out. Spend time with them, learn some of those classic riffs and figure out how to get the best out of them and they will reward you tenfold. Fear not the narrow neck - when you learn how to wring out that jangle it will all make sense and you too will become a Ric evanagelist!

This one's Jetglo, which means you don't get any fancy figure or swirly wood grain but... look, it just looks cooler than all the other colours, all right?*

*copywriter may own a jetglo Rickenbacker

The world's most popular twelve string electric guitar boasts all of the deluxe features of its Model 360 cousin. A standard for recording for more than thirty years, its haunting, melodic chorus has continued to benefit from evolution. The slimmed and re-contoured neck now makes the 360/12 easier to play than ever.

other products in the 'Rickenbacker' category: