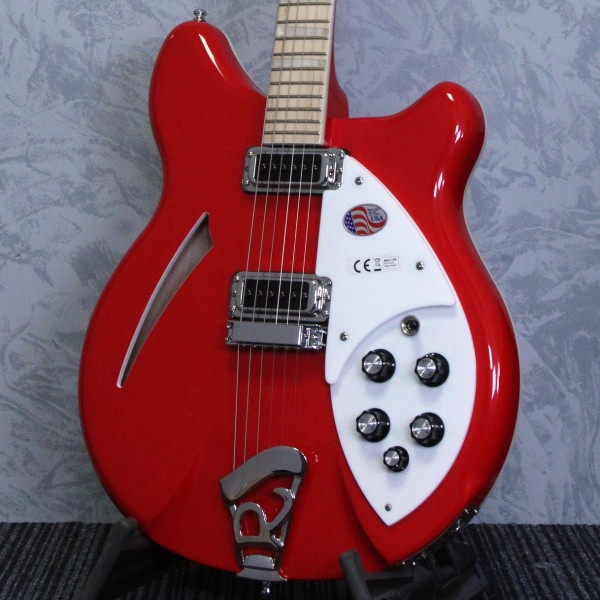 Rickenbacker have form when it comes to UK exclusives: even in the 60s they were making unique designs for the then distributor Rose Morris. This rather racily finished 360 was specc'd out by the current distributor Rosetti and it's a pretty cool thing. The most obvious feature is the none more British Pillar Box Red finish - their last exclusive was British Racing Green so we're detecting a pattern here - but there's also a rather unusual maple fingerboard borrowed from the recent walnut series guitars. I think we can safely say it looks pretty damn cool!

In the engine room we have two of Rickenbacker's hi gain pickups - no, they're not toasters, but the Forsyth Rickenbacker contingent think hi gains are actually pretty underrated pickups, and what you lose in 60s jangle you gain in 80s indie bite and punch. When your valves are cooking hi gains have a fantastic snarl to them. The middle position in conjunction with that weird little blend knob you never knew you needed opens up a lovely three dimentional shimmer and the neck pickup has plenty of warmth to it.

This guitar broke all the rules of traditional styling when it appeared amid the 'British' sound of the 1960's. Subtly updated through the years, this Deluxe hollow body with its special contour around the entire body perimeter, is still perhaps the most comfortable guitar of all. The bound body and Rosewood fingerboard, inlayed with triangular pearloid markers, provide an exceptionally attractive appearance. Stereo output is standard.

other products in the 'Electric Guitars' category: