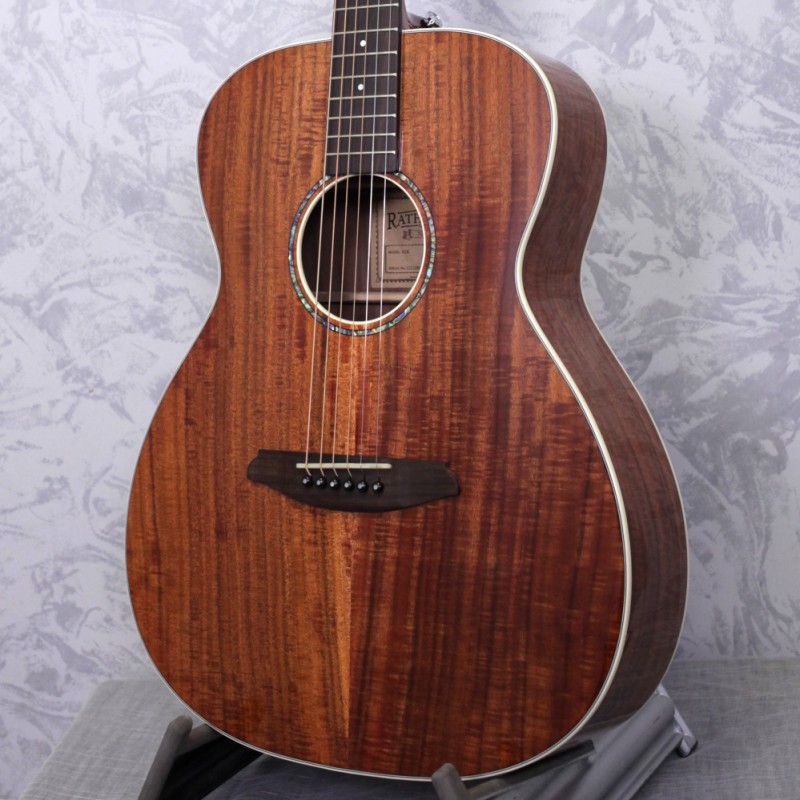 This guitar features a double top, with two thin pieces of koa with a carbon fibre lattice in between - the result is a very responsive and clean sounding acoustic. It looks the part too; Koa is one hell of a looker.

The Rathbone No.2 uses a now classic 'Orchestra Model' body shape. This beautiful body shape is said to have been originally created in an attempt to lure members of dance orchestras away from their banjos, toward greater projection of the steel-stringed guitar.

This ‘Double-Top’ construction enables the sound-table to be a little thinner than a single solid piece of koa but remain strong and ultra-responsive. The result is a super-resonant and voluminous guitar with bags of both character and all-out power.

The all-Koa tonewoods offer stunning exotic visuals while delivering a smooth and focused tone with a good level of high end chime.

Due to the environment in which it was initially designed to be used, the 'OM' was not a large-bodied guitar. In fact, few of the early 'modern' guitars would be considered large today. So, the 'OM-sized' Rathbone No.2 is not a large bodied guitar either, but the neck joins the body at the 14th fret, so the scale length is one that we would recognise from most modern guitars. When first used, this 'long' scale length was found to help deliver a remarkably, and some may say disproportionately, powerful and dynamic tone. The tuned strings are under greater tension than on shorter scale guitars, so they give a far greater tonal response and 'punch'.

other products in the 'Rathbone' category: