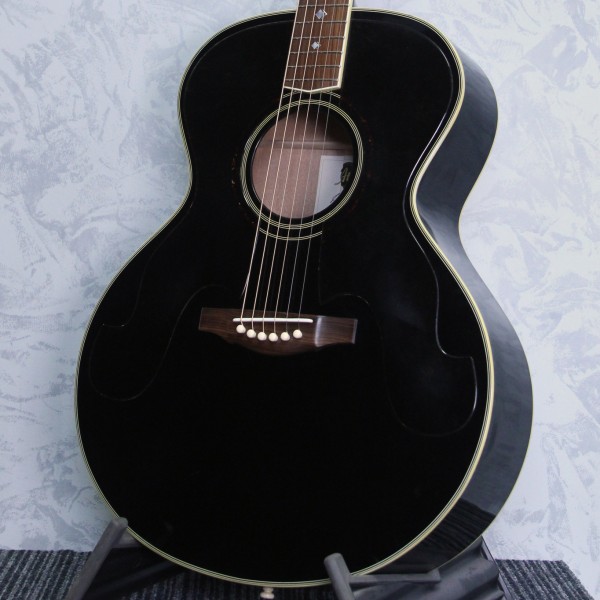 This handmade British guitar has a baked sitka spruce top, mahogany back and sides and a double oversized tortoiseshell pickguard.

The mahogany neck is C shaped and has a rosewood fretboard.

The Gibson J-185 is something of a well kept secret in the acoustic guitar world - originals were few and far between and, although the model received a considerable lift via an offshoot model marketed as an Everly Brothers edition the 185 has never reached the same iconic status afforded to models such as the J200 and J45. That's a shame because it's a really corking design: similar in appearance to the J200, the 185's slightly smaller outline makes it a considerably easier guitar to sit with whilst retaining a similar if slightly more focused tone to its giant sibling.

Alister's recreation takes aim at the Everly Brothers version with its huge oversize pickguards, and it's back and sides are mahogany rather than maple which we really like in terms of character - it's a little softer, sweeter and less glassy than a maple version. What we love about this example is how big it sounds yet with a great deal of definition compared to a dreadnought, with the bass kept closely in check so that it never gets overwhelming. It's a really great all rounder, a capable fingerstyle guitar that speaks easily with a gentle touch but you can also push this guitar hard and it remains tight and clear. That combination of punchiness and tightness makes for a great rhythm guitar, able to drive a track along without cluttering the mix - it's hard to imagine anything better for use in a band context.

So if this is a design that hasn't been on your radar, now might be a good time to check it out - you won't find a better example than Alister's!

Our ASJ model gives off some serious Everly Brothers vibes thanks to the double oversized tortoiseshell pickguard. The body shape is a medium jumbo which gives it plenty of power and volume, but at the same time offers a near perfect balance. The back and sides are mahogany which together with the Baked spruce top gives the instrument a warm overal tonal character. The C-shaped mahogany neck has 14 frets to the body and is fitted with a bound rosewood fretboard, inlaid with our new Atkin double-diamond pearl position markers. Matching double diamond headstock inlay and Atkin Logo give this headstock a truly unique aesthetic. This guitar is traditionally finished in black, but most colours are available to order.