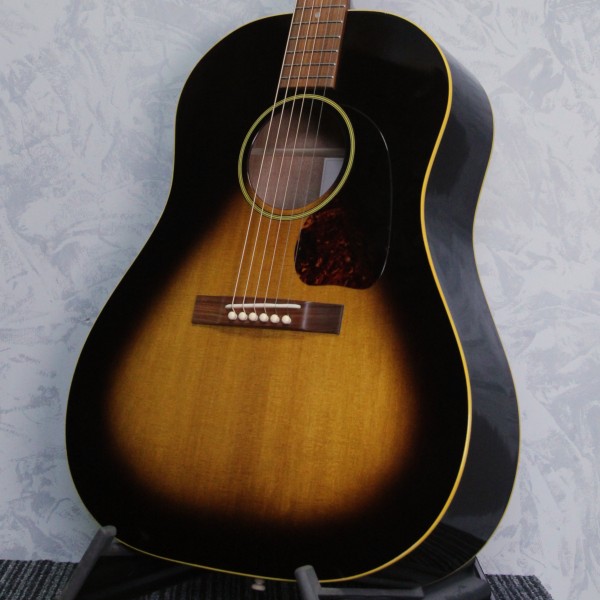 For full description see below

The ‘43’ is Alister’s tribute to the exceptional guitars produced in the early 40s by the ladies at Gibson (for recent research by Gibson historian John Thomas has demonstrated that it was women who kept the production line going during the war era), in particular the J-45 model. 1943 was significant as the year in which Gibson proudly emblazoned the legend ‘Only A Gibson Is Good Enough’ across the headstocks, and those guitars are often referred to as Banner guitars for that reason – the following year a competitor ran adverts cheekily advertising their guitars as ‘for when good enough isn’t good enough’ and Gibson quietly retired their banner. Alister’s replica plays safe with the banner and it simply says ‘The Forty Three’ in a banner style typeface.

Banners aside, the 43 does a good job of capturing the aesthetic of a war era Gibson. The sunburst looks pretty much spot on with just a hint of red in between the amber and dark coats, and the celluloid style binding looks appropriate for a vintage guitar - it’s thinner than you might see on a Gibson reissue and technically closer to an earlier model than the forties style, but it fits the design well and looks good with an amber tint simulating the discolouration that you would expect on a 70 year old instrument. The bridge copies the small, straight style bridge of a 40s J-45 although it’s a drop in saddle and dispenses with the bolt holes found on originals: so, minus points for authenticity, but plus points if you want to fit a pick up. The rosette is a little fancier than the original would have been but, honestly, I think it looks nicer. Finally the pickguard is a great looking piece of polished and bevelled edge celluloid which looks very classy and vintage correct.

Speaking of vintage, this guitar has been finished with a fairly subtle relic treatment. This is something Alister has been working on with his White Rice project over the last few years and he does it exceptionally well, giving the guitar a very realistic patina. It’s a thinner finish with less plasticiser in it than the full gloss Atkins and, whatever your opinion of the relic concept, it certainly makes for a good sounding guitar.

Although the neck profile of this guitar is a little more of a full C shape than typical for Atkin, combined with a 43mm nut it certainly doesn’t feel like a 40s guitar – if anything this is much closer to a modern Gibson than anything made before the late 50s. Still, there’s enough meat on the neck for it to feel like a decent handful and many players might prefer something a little less chunky than vintage correct would allow. The heel is an elegantly sculpted affair that recalls earlier Gibsons and makes access to the top frets a pleasure. The headstock is Alister’s standard rooftop style with a gold decal for both logo and the banner, and combined with the relic finish looks really lovely. We’re not 100% certain of the brand of the tuners but they’re single line Kluson Deluxe types with crème buttons and they’ve been given the relic treatment to blend in with the guitar.

Just as we have a certain expectation of how a Martin dreadnought should sound, Gibson slope shoulder guitars have a sound of their own and we’re keen to see if the 43 nails it. Sure enough, hitting a bass note produces a sound that is more fundamental and with less fizz than a similar size Martin, with chords having plenty of thump in the low mids and less jangle. That said, this is in no way a dark sounding guitar with plenty going on in the treble register. Mahogany is a great timber for providing a bright, lively tone when played vigorously yet sweetening up dramatically when approached more gently. For fingerstyle the guitar has a quick, dynamic attack that is perfect for fast blues and ragtime and the full bottom end works well for strident bass runs.

As with the White Rice, there’s something about these relic Atkins that gives you a real feeling of playing an old guitar and it’s hard to pinpoint what that is. Certainly there may well be a psychological element to playing something that looks like it should be an old instrument, but as someone who owns and actively hunts out old Gibsons to play, I really do feel like there’s an element to the relics that gets closer than the modern finish Atkins. It’s a hard one to verbalise but there’s a comfortable, worn in feel to these guitar that I really love. Aside from some minor quibbles about historical accuracy – and it’s intended as a tribute rather than a perfect replica - it’s a great guitar that aspires to be in the rarefied company of some classic guitars, and does a wonderful job of holding its own.

The ‘The Forty Three’ – Relic.

After working with the Buddy Holly Guitar Foundation to recreate Buddy’s 1943 J-45, we decided to permanently add this exacting replica to our Historic Series range. The Forty Three pays homage to the legendary banner-era J-45, a classic design that has inspired us both as players and guitar makers.

Direct and powerful, but with an easy-playing shorter scale length, it’s easy to see why this guitar has been favoured by so many singer-songwriters over the years. The big-bodied J-45 shape, combined with a Sitka spruce top and mahogany back and sides, delivers warm mids, solid lows and great definition. It’s a timeless acoustic guitar tone.

It was our aim to replicate not just the sound but the look and feel of the banner J-45s. Our custom aged nitrocellulose finish is designed to capture aura of a guitar that has been played for the last 70 years.