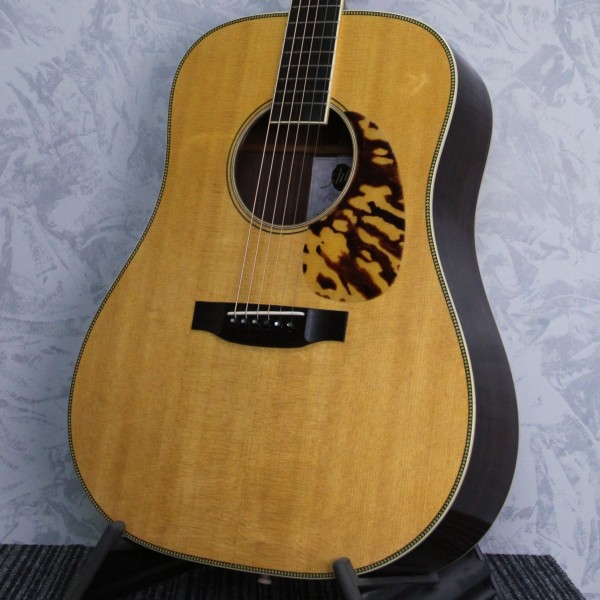 For full description see below

Read our interview with Alister regarding the White Rice project

The Atkin White Rice takes its inspiration from a very special guitar and two very special players who owned it, Clarence White and Tony Rice. The original was a much-modified war era Martin D-28 owned by Clarence in the 60s and aquired by Rice - who owns it today - in the early 70s. It's a fascinating story and we've written a more in depth article about the original and its history along with an interview with Alister about the project that you can read here.

The first Atkin White Rice was made primarily as a vehicle to test out ideas that Alister had about creating a relic style finish. However, with considerable interest in the prototype, Alister started to research the guitar further, studying a number of vintage Martins of the era and working with Clarence's daughter Michelle to refine the design. The one we have in Forsyths represents the most recent step in the development of the model.

The neck of the original guitar had been substantially modified from it's original proportions, and the replica has a fairly modern 43mm nut. The neck profile is a C shape that veers towards a V - compared to a modern HD-28 the Atkin is slightly deeper but with less shoulder, and even as a player who prefers a large neck it's a comfortable handful.

Tonally the first thing we noticed comparing to a Martin HD-28V is that even fingerstyle the Atkin can be pushed right the way through its dynamic range - you don't need a pick to get the best out of it and as a fingerstyle player it sounds huge. There is a massive amount of harmonic content to the sound along with a deep, pumping bass response and the sustain is out of this world. Strummed heavily we felt it was livelier if slightly less refined than the HD-28V. We also felt that it did a very good job of sounding like an old instrument - it's hard to believe it's only a few months since it was on the workbench.

The relic effect is exceptional and very tastefully done, concentrating on checking and crazing rather than patches of wear as you might see on a typical electric relic finish. Together with the pumpkin amber of the top and tinted lacquer that darkens the binding and rosette it could pass for a fifty year old guitar at first glance.

The White Rice does an exceptional job in living up to an iconic instrument, and it's one of our favourite guitars that we've had the pleasure to handle. If you're looking for a D-28 style dreadnought that lends itself particularly well to fingerstyle this guitar should be very high up on your list!

Atkin set out to build a no-compromise Dreadnought that would honour this exceptional guitar and its legendary owners.

While Atkin's regular Sitka spruce and East Indian rosewood Dreadnought packs plenty of power, sustain and projection, this guitar is something else. Thanks in part to the oversized soundhole, which lets more air in and out of the guitar, The White Rice combines incredible power – in Alister’s words, “it sounds like a cannon!” – with an openness and resonance that is unique. Accurate in every detail, from the 45mm nut to the detailed custom relic finish, this is not just the ultimate White/Rice tribute but, perhaps, the ultimate Dreadnought.