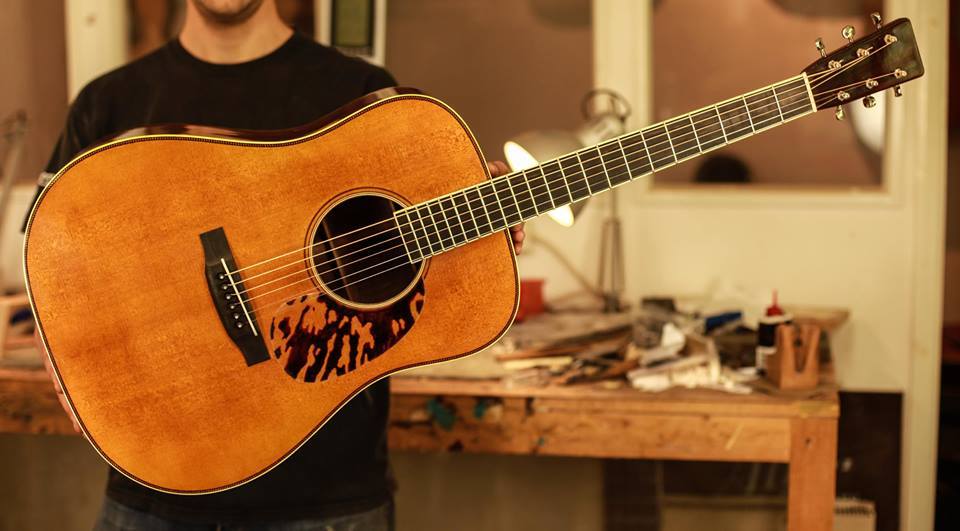 This guitar, we’re sure you will agree, looks like a guitar with a story to tell.

That story starts with the legendary country picker Clarence White and a very worn, battered 1935 D-28 the young White found in a music store in desperate need of attention. The guitar was in a terrible state of repair, was missing a fret board and had undergone a series of modifications. The top had been sanded thin and the neck shaved. The owner previous to Clarence had played the guitar sufficiently hard to wear away patches of wood around the sound hole, and attempted to improve the appearance of the guitar by enlarging the sound hole so that the damaged wood was removed. Still, it was a D28 at a price Clarence could afford, and he purchased the guitar and entrusted it to a repairer who fitted a Gretsch fret board and attended to various cracks. White was advised not to fit heavy gauge strings to it due to the sanded top being too thin to support them, advice that was swiftly ignored and the guitar was soon back for more repairs to the soundboard. For the early part of the 60s Clarence played the D28, until frustrations with its declining playability led to it largely being replaced by a newer D18. The guitar certainly continued to live a colourful life in Clarence’s hands, including getting shot with a BB gun and narrowly surviving a run in with a truck, before eventually being used as collateral on a loan in 1965 and never reclaimed.

Tony Rice first encountered the legend’s D28 as a 9 year old backstage at a Clarence White concert, where White kindly allowed the child a chance to play his old guitar. As Rice began to build a reputation of his own, he began to take an interest in acquiring the instrument and in 1975 tracked down its current owner, who was happy for Rice to purchase it. Once again, the guitar required considerable work to make it playable, with several cracks to repair, a very worn bridge plate and a much needed neck reset, but the resultant guitar has remained Rice’s number one to the present day.

In 1993 Rice’s Florida home was destroyed by tropical storm and, when a rescue party was sent in to recover the guitar it was discovered floating in Tony’s ruined lounge the sodden instrument was lovingly nursed back into playing condition by master luthier Harry Sparks. It remains in playable if fragile condition today.

A number of recreations of the legendary guitar have been made, with Santa Cruz working closely with Rice to produce a signature model, and Martin also offering official and inspired by copies of the guitar. Most recently English luthier Alister Atkin has been involved on a quest to recreate the guitar, and Alister was kind enough to spend some time with us discussing the guitar: 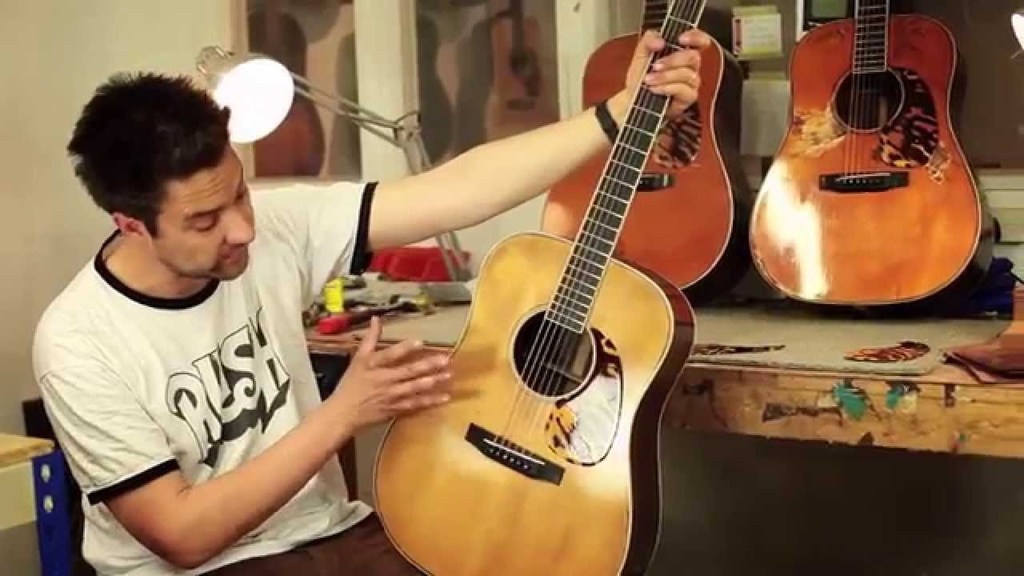 Alister, what appealed to you about the White Rice guitar particularly?

When I was working on the Buddy Holly series of guitars I had an accident with one of them and rather than waste the instrument decided it would be interesting to try relicing it. Then, once I'd done one I got interested in the idea and, having always been a fan of Clarence White and Tony Rice and knew the story of that guitar, thought it might be a good project so I made one that sold quickly and I made another that did likewise. At that point I received a letter from Michelle White who is Clarence White's daughter, who was worried about someone using her father's name and we had a chat and I suggested a collaboration with her. I also decided I wanted to get closer to the original '30s spec Martins and spent time studying a series of wartime d28s, taking measurements and listening to how they sound.

How many have you made of the White Rice now?

About 10-15. It's been a slow burner being a bit of a niche guitar, particularly in the UK where we don't have the big bluegrass scene there is in the US but for people who are into it they're very into the idea and there's a lot of goodwill for the project.

What changes have you made from your Retro D28 design? Did you copy features such as the unusual scale length of the original or did you think that was a step too far?

Essentially the differences are it has the bigger sound hole and extra frets in a longer board but it's otherwise similar in lots of ways to the Retro. I looked into scale length and have though about copying it but there are actually lots of different guesses as to what it actually is so without getting a measurement from the guitar itself I don't have a definite scale length to reproduce.

How you you feel the large sound hole effects the tone?

There's quite an argument that a larger sound hole works well on most guitars – it really throws the sound out. I'm a fan of that guitar and I like the combination of a dreadnought with a big sound hole. I like a lot of different guitar designs and I'm quite traditional in that I don't like messing about too much with the originals but I've tried the big sound hole on other guitars such as OMs and liked it.

Tony Rice always said he didn't think it made a difference!

Well, it's all subjective!

How have you found working with Michelle White? What has her input brought to the project?

At the point she got in touch Martin had stopped production of their model and she was interested in continuing the legacy. She's done a lot to helped publicice them and given me some great contacts. She's working on an event to help Tony, who's not currently able to play, and I'm building a guitar to auction auction to support that.

Do you think the original was a special instrument or was it more the fact that two extraordinary guitarists played it?

There are so many different opinions as to how the original sounds. I met with Herb Peterson who used to play with Clarence White and he passed on lots of information about the guitar including some comments about the original and the early replicas. On the one hand I've always believed the hands of the player are really what makes music special, but then if you put a great guitar in the right hands then the combination is certainly going to sound great!

Can you tell us a little about the relic process? What challenges are there to relicing an acoustic compared to an electric guitar? Presumably you're a fan of relic guitars?

We use a specific lacquer where we've basically tried to take out all the things we've been adding to lacquer for years to to make it behave better and less likely to crack! The recipe we have works very well in that it cracks very easily. The process is similar - we can still use temperature to check the finish but we have to be a little more careful and give it time to settle.

You have to try to get your head around the concept of relics and understand why its done and see it as a bit of fun. There is a bit of a tonal benefit - the finish is thinner which is a good thing so there's good reason to do it if you're trying to make a great guitar and it also just feels right in the hands. There's an illusion going on but they sound different and feel differ and if it makes you approach them differently in how you play them it's all to the good.

Are there other historic guitars that you'd be interested in making a recreation of?

Not at the moment, no. I think there's still places to go with the White Rice, particularly if we get to see the original which is something I'd like to do there will still be things to learn on it, so the White Rice project isn't completed just yet.

You can try the White Rice for yourself in our Manchester show room. If you're interested in reading more about the guitar there's an excellent chapter in this E-book published by the Fretboard Journal.